The FBI spent more than two years chasing alleged money launderers in Las Vegas and Florida as part of “Operation Bo-Tox,” a code name referencing the toxin used in cosmetic procedures to reduce wrinkles. But the case finally collapsed this week, when the Justice Department moved to drop all charges against the lead defendant, Emile Bouari, as part of a pretrial diversion agreement.

According to the FBI’s internal files, agents in 2014 believed that Operation Bo-Tox would expose a network of money launderers who ran weight loss, aesthetician, and other health and beauty businesses in Las Vegas.

Charles Ro, the FBI agent who supervised the undercover sting, described the case as an investigation of a “Middle Eastern criminal enterprise” — an apparent reference to Bouari, who was born in Lebanon and operated a weight loss clinic in Las Vegas. Bouari’s Lebanese heritage represented the case’s only connection to the Middle East.

The Justice Department’s capitulation in Bouari’s case is remarkable, given the time and resources the bureau invested and the fact that Bouari publicly acknowledged that he laundered money for the FBI’s undercover agents. But as his trial neared, Bouari had signaled to the DOJ that he intended to put the bureau itself on trial, delving into the agents’ dubious conduct and questioning whether they had legal authority to start the investigation in the first place.

“There were huge issues in how and why the FBI targeted me,” Bouari told The Intercept. “No probable cause. They came after me with a personal vendetta and in a highly invasive sting. The case would have revealed terrible issues of abuse of power.”

As The Intercept described in a feature story last year, the FBI invested heavily in Operation Bo-Tox, deploying an informant and an undercover agent in Las Vegas and sending them on two trips to Miami, where they hung out in strip clubs (FBI recordings captured the agent and informant discussing their sexual conquests and negotiating with a stripper). The agents’ efforts were intended to engage Bouari, who had no previous criminal history, and nearly two dozen of his friends and colleagues, in money laundering schemes. But after two years of undercover work, the FBI had nabbed only Bouari, his girlfriend Kimberly Milko, and a friend of theirs, Mary Green, who together allegedly laundered $ 590,000 and collected $ 52,900 in fees.

Monday’s agreement, more than five years after the FBI first targeted Bouari, suggests that the Justice Department has come to view Operation Bo-Tox as largely a waste of time and resources. Assistant U.S. Attorney Robert Knief told U.S. District Court Judge James C. Mahan the government had agreed to drop all charges against Bouari so long as he stays out of legal trouble for the next six months, holds down a job, and cooperates with a pretrial services officer.

The charges against Milko and Green are still pending. Bouari’s brother Ghassan was also indicted with the group, despite not having been involved in any of the alleged financial transactions, and spent 18 months in pretrial detention before prosecutors dropped all charges against him in August 2017.

Emile Bouari spent more than two years in detention because prosecutors claimed that he was a danger to the community. He was released on his own recognizance in May 2018, but the brothers’ businesses went under while they were in jail. (In February 2018, Ghassan Bouari sued the U.S. government and the agents involved in the case, alleging that his rights had been violated as a result of the government’s malicious prosecution.)

The U.S. Attorney’s Office in Las Vegas declined to comment on Monday’s agreement. The FBI did not respond to requests for comment. 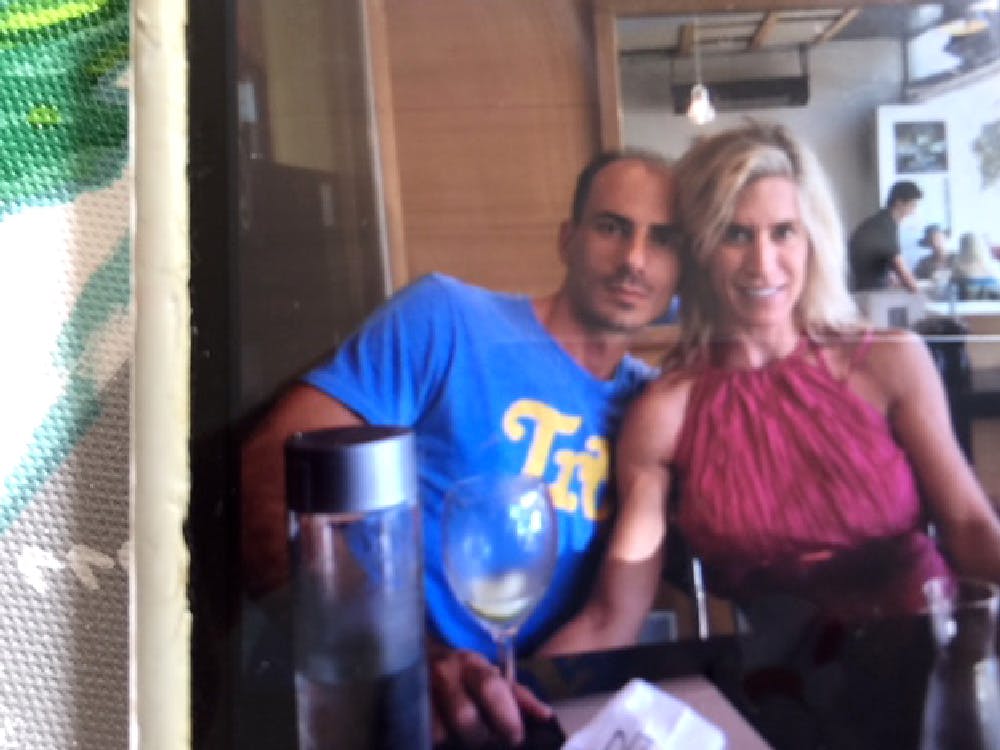 Love and Loathing in Las Vegas

As The Intercept described last year, Bouari believed that the FBI’s decision to target him in an undercover sting resulted from “a love triangle,” according to a statement Bouari’s lawyer, Mont E. Tanner, made in a court.

Bouari and Milko described to The Intercept how Paul Padda, a former federal prosecutor who is now a private lawyer in Las Vegas, had developed a flirtatious relationship with Milko during a period when she and Bouari had broken up. Bouari and Milko separately described how, after they had reconciled, Padda approached their table at a Las Vegas restaurant one night, pointed his finger at Bouari, and said, “I fucked your woman and she loved it.”

Padda has denied that this incident occurred; he has also denied having the relationship with Milko that Bouari and Milko described.

Whatever the circumstances, there was bad blood between Padda and Bouari and Milko. Someone anonymously posted statements on the website Ripoff Report, describing Padda as “a real sleaze bag” and “a terrible attorney” who “has defended pedophiles.” In January 2014, Padda filed a defamation lawsuit over the statements, first naming “John Does” as defendants and then naming Bouari and Milko after he received subpoenaed records from their internet service provider.

Within weeks of Padda filing his lawsuit, a short Moroccan man named Michel Benamar showed up at the FBI’s Las Vegas office with a story to tell: Benamar claimed that Bouari had embezzled $ 1 million from a business partner, though he couldn’t provide the name of the person who had purportedly been fleeced. Benamar also said that Bouari was willing to launder money.

This tip was the only information the FBI had that Bouari was involved in criminal activity, and Benamar’s credibility was questionable. Just seven months earlier, Benamar had been arrested for writing four bad checks to Vegas casinos. In addition, Benamar had a $ 2.8 million civil judgment against him in Alabama for failing to pay back loans related to a vending machine business. Nevertheless, Ro, the FBI agent, made Benamar an FBI informant and launched Operation Bo-Tox.

In a sealed motion filed in November 2018 and provided to The Intercept, another lawyer for Bouari, William H. Brown, alleged that Padda had a previously unknown connection with Benamar. Before becoming an FBI informant, the motion says, Benamar had worked as an informant for Jason Hahn, a Las Vegas police detective-turned-private investigator, who is listed as “a valuable asset” on Padda’s law firm’s website.

“Emile Bouari believes (and has conveyed this to the government) that he was targeted by FBI Agent Charles Ro essentially at the behest, and for the benefit, of Ro’s friend (and former local AUSA) Paul Padda, and that in service of this vendetta another Padda friend/associate (former Metro Detective Jason Hahn) coordinated the planting of informant Michel Benamar to serve as a catalyst, and pretext, for the government’s investigation, and to entrap Bouari,” the motion said.

The Intercept could not independently verify Benamar’s relationship with Hahn, who did not respond to requests for comment. Padda and Ro know each other in “a professional capacity,” Padda’s lawyer Ryan J. Stonerock told The Intercept. Padda and Ro are both listed as advisers to the International Organization of Asian Crime Investigators & Specialists, a nonprofit organization that hosts an annual conference on transnational crime and terrorism, but Stonerock said that while Padda had agreed to do legal work for the organization, he had not attended any meetings or events and was not aware that he was listed as an adviser.

In addition, Padda would not describe what, if any, conversations he had with Ro about Bouari’s case. Neither Padda nor Ro responded to recent requests for comment.

Before Operation Bo-Tox, Ro and his partner on the case, Dennis Lao, had a reputation as problem agents. In 2010, while assigned to the FBI’s office outside Los Angeles to investigate Asian organized crime, the pair traveled to the Philippines for an undercover investigation in which Ro posed as a broker for Mexican drug cartels interested in importing weapons and Lao as Ro’s bodyguard. The sting led to the arrest of three Filipinos for transporting weapons to the U.S., including assault rifles and grenade and mortar launchers.

But witnesses told an investigator for the defendants’ lawyers that as they pursued the case, undercover FBI agents, including Ro, had spent money on alcohol and sex at a club in Manila that reportedly employed underage prostitutes. The FBI disclosed in court that agents had spent $ 14,500 in eight days in the Philippines, including $ 3,000 for a single evening at one strip club and other expenditures labeled “entertainment and cocktail (tips included).” One of the agents working with Ro and Lao testified in court that he had sex with an employee of the club and gave her $ 80 — but claimed the money was for her sick father, not payment for prostitution.

In a recent class action lawsuit alleging gender discrimination at the FBI Academy, 16 current and former women FBI employees accused Ro, who had served as an instructor, of making sexist and racist jokes — including referring to a black trainee with braids as “spaghetti head” — and talking about the size of his genitals and his “little blue balls.” He also allegedly discussed a female trainee’s sex life in a derogatory way with male trainees.

The FBI did not respond to questions about Ro, who appears to have left the bureau.

Rhode Island’s Progressive Wave Was Four Years in the Making