On Thursday, economist and CNBC contributor Larry Kudlow was named the new director of the National Economic Council at the… 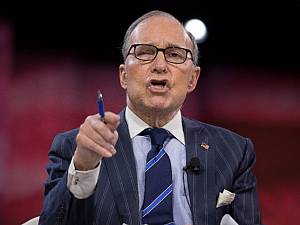 On Thursday, economist and CNBC contributor Larry Kudlow was named the new director of the National Economic Council at the White House. Kudlow is a longtime advocate for low taxes, free trade, and looser immigration restrictions. Although he has softened slightly on the last two, I am hopeful he will use his new perch to continue to advocate forcefully for all of these positions.

To many in Washington and New York, Kudlow is known for being one of first supply siders. He was a supply sider when supply side wasn’t even a thing, and he has remained loyal to that way of thinking. In other words, he likes his and everyone else’s taxes low—especially as they apply to capital.

Needless to say, he was happy with the tax reform plan passed and signed into law last December, especially the reduction of the corporate tax rate from 35 to 21 percent. Kudlow is more politically savvy than I am, so he probably had more tolerance than me for the “middle class tax relief” part of the plan. In my humble opinion, if Congress and the president won’t cut spending, they shouldn’t implement tax cuts with no apparent economic growth payoff.

When you are engaged in a tax policy battle, having Larry Kudlow on your side is an asset. He was, for example, quick to oppose the misguided Border Adjustment Tax last year, even if it meant going after longtime allies like House Ways and Means Chairman Kevin Brady (R-Texas) and Speaker Paul Ryan (R-Wis.). For months he was relentless in working his contacts here in Washington to stop the measure, as well as educating viewers on CNBC.

His input on taxes will be welcome in the White House, since there is still a lot that can be done to make improvements to the recently passed tax plan. Making permanent some of the provisions which are currently set to expire should be one important priority. Hopefully, Kudlow will also remind the president and members of Congress to cut spending to pay for tax reform this time around.

I assume he will also use this influence to address one of his longtime pet peeves: indexing the basis of capital gains to inflation. As he said on CNBC last summer:

The results of this policy can be perverse. “As has been well documented,” writes Alan Auerbach, University of California economist, “realized capital gains may be subject to tax rates that easily exceed 100 percent of real gains in the presence of inflation.”

If he decides to use his influence to push for that change, he will get lots of support from the free-market tax movement.

There are many good things to say about Larry Kudlow. But as it relates to this job, the best news of all might be that he is no Peter Navarro—the anti-trade Trump advisor.

Unlike Navarro, who has said that he believes it’s his job to confirm Trump’s worst anti-trade instincts, Kudlow has been a consistent advocate for free trade. When he worked at the White House under president Reagan he used to call free traders like him The White Hats. As such he didn’t hesitate to express publically his opposition to the president’s recent decision to impose punishing tariffs on steel and aluminum.

If there’s a reason to worry, it’s Kudlow’s recent endorsement of targeted tariffs for China—a country he sees as a gigantic problem for the U.S. Kudlow recently said that he is “not opposed to targeted tariffs” against the country, which he called a “Trumpian way of negotiating.”

One can recognize the tremendous challenges posed by China and still reject a policy solution that Kudlow himself rightly identifies as being equivalent to a tax hike that hurts consumers more than it helps the protected industry. And even though he now argues that the tariff are simply a shrewd negotiation tactic against China, I still question the soundness of it all as the people hurt the most from the strategy are American consumers.

A bad a policy is still a bad policy, even when directed against those you consider to be bad players on trade. Besides, China has repeatedly demonstrated that tariffs won’t change the behavior in question. So you might as well go straight to what may actually work, even if imperfectly: joining forces with other countries to get China to agree to better practices, enrolling in the World Trade Organization, and negotiating international and mutually binding agreements.

Kudlow has also evolved on immigration over the years from being pro-immigration to being friendlier to restrictionist policies. I certainly wish he would change his position on that, and start seeing the president’s anti-immigration stance as akin to a tariff on foreign labor that will ultimately hurt American consumers (of labor).

That said, his moderate skepticism toward trade and immigration could actually be an asset in this White House. As Avik Roy recently told me, “I think where he is philosophically is also perfect for this White House. He’s a supply-side Reaganite in general, but has a pragmatic streak on trade and immigration in ways that allow him to inject good policy ideas into the Trump administration.”

Like most supply siders, Kudlow doesn’t spend much time talking about the huge entitlement crisis this country faces. However, from my interactions with him over the years, I got the impression that he agrees we have a problem that won’t solve itself without reform. He just has more faith than I that economic growth can do most of the work for us. This is his chance to steer us in a solidly pro-growth direction and prove me wrong.

Finally, I would be remiss if I didn’t note that Larry Kudlow is one of the kindest human beings in this cutthroat business we are in. I have witnessed his generosity toward others, and I have experienced it too—as have many others.

I wish him luck in this new job. He will need it.

The War on Cash Is A War on Liberty — Let’s Stop It!

Bernie Sanders’ Wealth Tax Would Be Bad for Workers