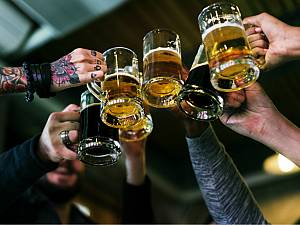 Tucked away in last year’s otherwise polarizing and contentious tax cuts was a broadly bipartisan reduction in federal excise taxes for the nation’s brewers, distillers, and winemakers.

Originally introduced as the wordy Craft Beverage Modernization and Tax Reform Act by the unlikely matchup of Sens. Ron Wyden (D-Ore.) and Roy Blunt (R-Mo.) in early 2017, this bill had managed to attract some 56 bipartisan co-sponsors in the Senate and another 303 co-sponsors in the House last year.

The bipartisan support did not survive it being folded into the very Republican Tax Cuts and Jobs Act, but what did survive were some steep rate reductions for alcohol producers.

Federal excise taxes on beer were essentially slashed in half, going from $ 7 per barrel to $ 3.50 per barrel for the first 60,000 barrels produced. That alone has had a big impact on the nation’s smaller craft brewers.

“It’s basically cut the federal excise tax in half and excise tax for a brewery in the beer business is substantial,” says Adam Benesch, CEO of Baltimore-based Union Craft Brewing.

Benesch’s company is set to produce some 12,000 barrels this year, meaning the changes to federal excise tax rate saved Union Brewing about $ 42,000, which he says was reinvested back into the business.

“The things we as growing, small brewers face is the cost of acquiring new kegs, hiring great people, making investments in our quality control lab. When we get a tax reduction like we did, those are the first things we looked at,” Benesch tells Reason, saying that Union Brewing was able to upgrade his quality control equipment, hire new folks, and help their expansion into a larger facility they are sharing with other Baltimore manufacturers.

It’s a similar story for Maryland’s Flying Dog Brewery. CEO Jim Caruso (who is a donor to the Reason Foundation, which publishes this website) says the tax cuts might not look like much at the consumer level, but they free up a lot of money for businesses to reinvest in their operations.

“When you look at this reduction in taxes. That translates to a penny per bottle. It’s a small cost per bottle times the number of cases, that adds up pretty quickly,” says Caruso, saying his company saved some $ 300,000 thanks to the tax cuts, which he says has gone toward buying new capital equipment.

The same can be said for the tax cuts for craft distilleries, which saw the excise taxes on the first 100,000 proof gallons cut from $ 13.34 per proof gallon to $ 2.70. That sounds like a lot but adds up to about $ 2 off a fifth of whiskey.

That all this doesn’t add up to huge savings for drinkers at the bar helps explain why one predicted negative side effect of the tax cuts hasn’t come to pass.

When the tax cuts were first being proposed, a number of left-leaning outlets warned that a reduction in federal excise taxes would cause a spike in alcohol-related automobile deaths on the logic that cheaper booze would mean more drinking, and thus more drunk driving.

This reasoning was shaky at the time, and fortunately there’s no evidence of a spike in drunk driving in 2018. Indeed, preliminary results from the National Safety Council show driving deaths from the first six months of 2018 are down slightly.

All told the tax cuts shaved some $ 142 million off the beer industry’s $ 3.5 billion excise tax bill. Some $ 80 million of this is going toward small and independent brewers, notes Bob Pease of the Brewers Association, a trade association representing craft brewers.

The Brewers Association has collected surveys from members on what brewers have done with their savings. He says that hiring new workers, purchasing new equipment, and increasing philanthropic contributions were among the top results.

This is a big reason, says Pease, that the excise tax cuts—set to expire at the end of 2019—should be made permanent. “We have 7,000 breweries in the U.S. These men and women are taking this saving and reinvesting in the business, they’re not pocketing the money.”

No Good Options For The Fed; So Audit It & Get Rid of It!

Social Security Is Running Toward Insolvency

Revolution in Italy? Voters ‘Threw The Bums Out!’

A More Powerful IRS Won’t Target Only the Wealthy