In the fall of 2017, Yvonne Esparaza gathered all the mental health records she could find in order to plead…

In the fall of 2017, Yvonne Esparaza gathered all the mental health records she could find in order to plead to a Los Angeles County judge not to send her daughter to jail. She said her daughter, Jasmin, who had a history of mental illness and substance abuse, was facing up to 10 years in prison for grand theft auto. Yvonne was concerned that a cell would make her daughter’s condition worse. The judge said the health records were irrelevant to her prosecution and sent Jasmin to the Century Regional Women’s Detention Facility. Two years later, Yvonne said her daughter’s mental health has worsened, and she fears for Jasmin’s safety. 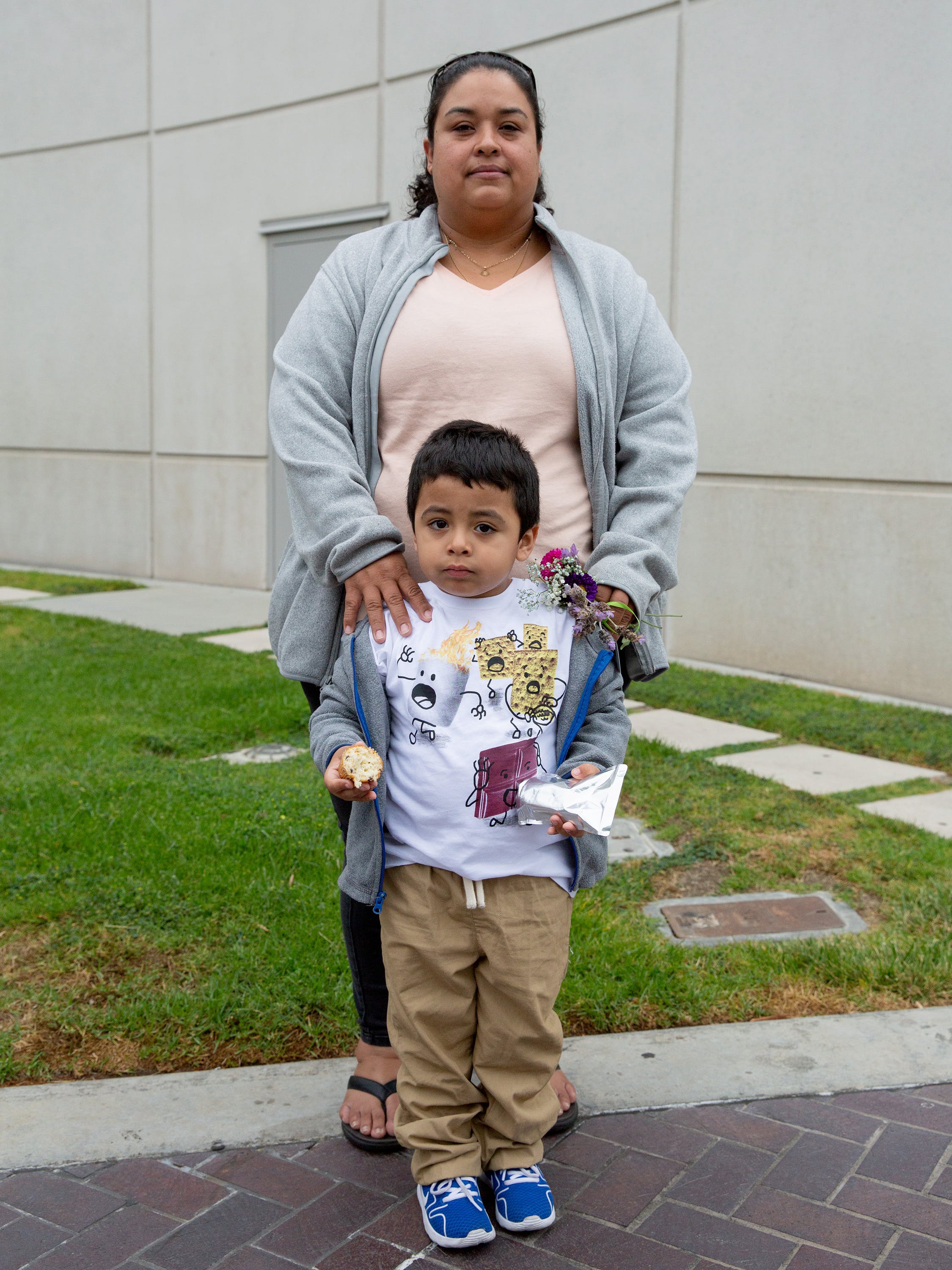 Yvonne Esparaza with her grandson, Alex, who came to visit his mother at the Century Regional Women’s Detention Facility in Lynwood, Calif. on Mother’s Day, May 12, 2019.

Photo: Arlene Mejorado for The Intercept

On May 12, 2019, Mother’s Day, Yvonne was among dozens of family members who visited the Century Regional Women’s Detention Facility. Right outside the facility, members of the JusticeLA coalition greeted family members with flowers, food, and information. It was part of their monthslong campaign to ask the Los Angeles County Board of Supervisors for a moratorium on all jail construction and expansion, as well as a part of a growing national movement toward a justice reinvestment strategy, which favors diversion and investment in re-entry over reliance on the prison system.

“I just want her out of there; I know of jails in other countries that know how to treat mental health without incarceration. This isn’t right,” Yvonne Esparaza, who joined the coalition after the Mother’s Day event, told The Intercept. “It is time for something better, the whole system is messed up.”

On August 13, the movement had a pivotal victory. Following months of teach-ins, public forums, and office visits by JusticeLA, the Board of Supervisors voted to halt a $ 2.2 billion contract to build a gargantuan, jail-like mental health facility. Instead the board will investigate how the county could invest in treatment programs and alternatives to incarceration.

The win is notable in part because it was driven not by reform politics, but by an explicit call for prison abolition. Patrisse Cullors, co-founder of Dignity and Power and the Black Lives Matter movement, led the fight against the jail. As she told The Intercept, “In the history of abolitionist organizing, we have seen over the last 20 to 30 years, the public has said, OK, we can do abolition, but how do you actually do it? Yesterday we did that.” 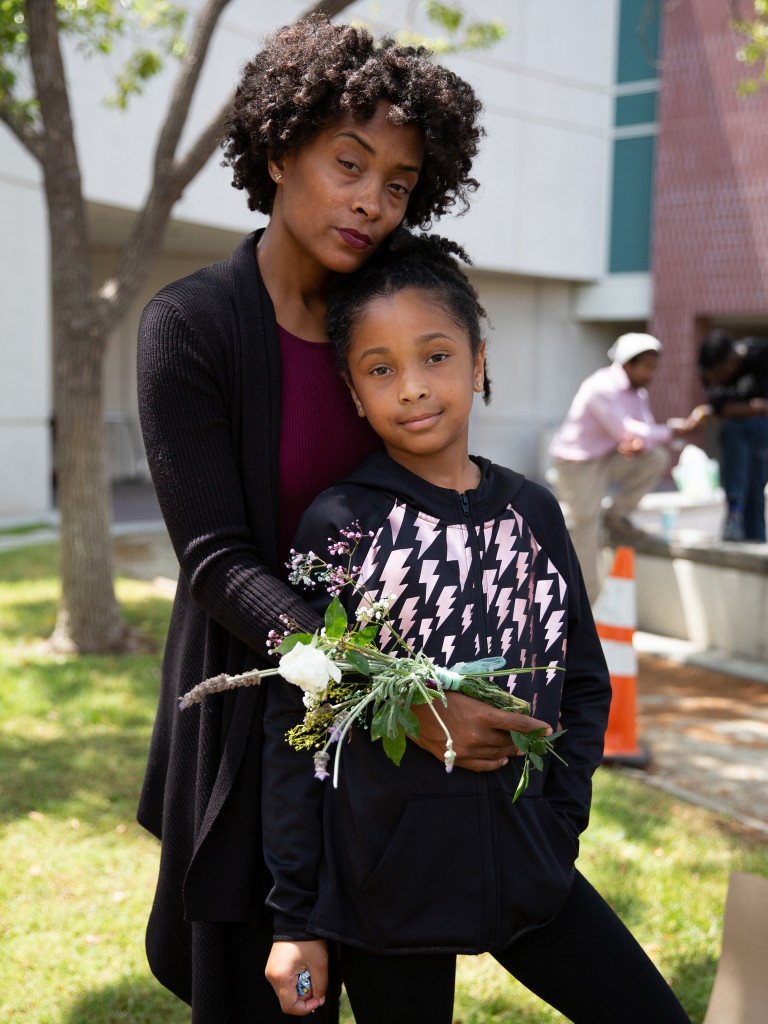 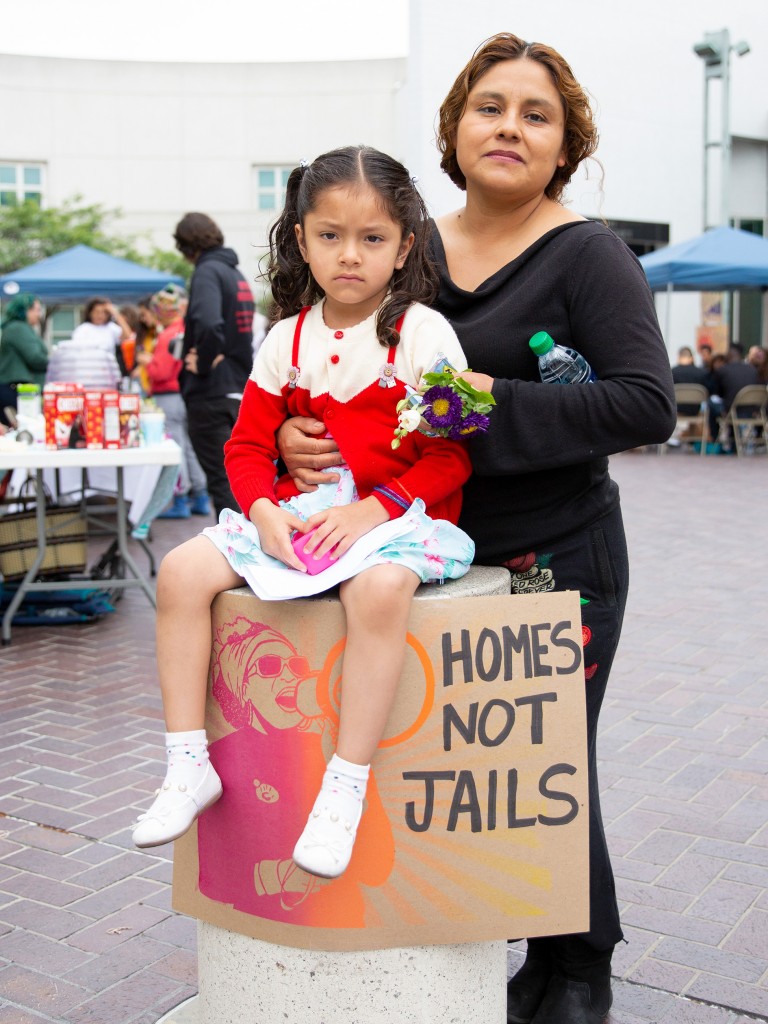 On February 12, the LA County Board of Supervisors approved a plan to replace the Men’s Central Jail — a large facility in downtown LA — with a mental health center. LA County is the most populous county in the country, with a growing population of over 10 million people, most of whom are people of color. According to the American Civil Liberties Union, it is home to the nation’s largest jail population, with a daily average of  22,000 inmates.

The $ 2.2 billion contract would have resulted in a project three times the size of California’s largest mental health hospital. With nearly 4,000 beds for pretrial detainees with mental health needs, organizers were concerned that the facility would be nothing more than a replacement jail. They demanded not only transparency on the plans, but also for an overhaul on the process to allow for an abolitionist framework.

The board also voted to allow the county CEO to continue its relationship with McCarthy Building Companies, known for building mental health jails that become unsafe, uninhabitable, and sometimes even deadly. McCarthy was responsible for the California Health Care Facility-Stockton in San Joaquin County, an $ 820 million prison medical facility built in 2010. By 2016, the facility received failing grades from the California inspector general, and in 2019, one prisoner died from an outbreak of Legionnaires’ disease.

But organizers were undeterred; JusticeLA launched a multifaceted campaign to cancel the contract, gathering community members county-wide to continue fighting for decarceration. The coalition met with health officials, supervisors, and the sheriff’s department. It also sought to bring people directly impacted together to understand what the county was planning to do with their loved ones inside, including during the Mother’s Day event. 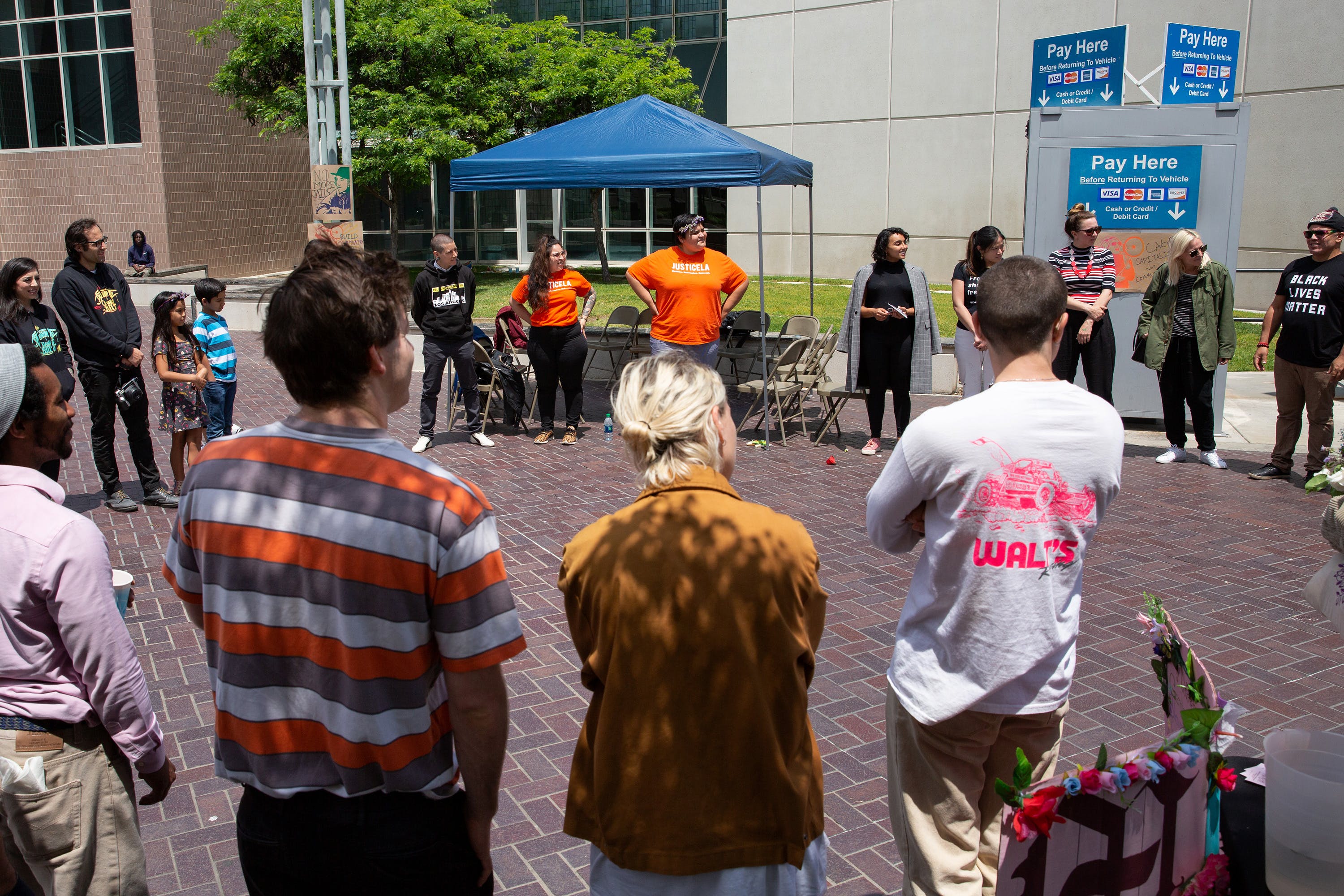 JusticeLA organizers and community members discuss the Los Angeles County Board of Supervisors’ decision at the Century Regional Women’s Detention Facility in Lynwood, Calif. on May 12, 2019.

Photo: Arlene Mejorado for The Intercept

Two members of the board who voted against the contract, supervisors Hilda Solis and Sheila Kuehl, also commissioned a working group tasked to find alternatives to incarceration. “A jail is a jail is a jail. It is not enough to change the name of the facility,” Solis said. Since February, that group has been meeting regularly with members that include scholars, activists, and county mental health specialists and county corrections. The interim report put together by the group details a plan for the roughly 5,000 people with “significant mental health needs” in the program. The group recommends an increase in community services, an improved re-entry plan, and a general shift “from a punitive criminal justice response to a public health, trauma-informed approach to crisis” — “Care first, and jail only as a last resort.”

In June, Solis called out the potential McCarthy deal to the board, saying it was premature to allocate so much money after a draft plan from McCarthy downsized the number of beds planned for the facility. “I look forward to reviewing the data we need to ensure that we deliver an appropriate project that is grounded in facts, community input, and a primary focus on diversion and rehabilitation, rather than punishment and incarceration,” Solis said in an official statement. The board voted to reduce the initial funding given.

Then, on August 13, the fight came to a head. Solis led a motion to reconsider a $ 2.2 billion contract with McCarthy Building Companies to build a new facility. Solis cited ongoing research to determine how many of LA’s inmates can be diverted from the prison system and argued that such analysis is necessary “to make the best decision on the right-sizing and configuration.” Black, Latinx, and Indigenous organizers, scholars, artists, formerly incarcerated people, and survivors of violence packed a meeting of the Board of Supervisors to call for the jails and jail expansion plans to be shut down.

The board voted 4 to 1 to cancel the contract. The lone dissenter —  Supervisor Kathryn Barger — sided with the sheriff, voting to keep the contract on the grounds that the county needed a solution.

With this victory, the coalition stands out for closing what was projected as one of the most expensive jail plans in history, reflecting efforts to force cities and jurisdictions to decrease their reliance on incarceration.

Los Angeles County follows in the footsteps of San Francisco, which voted to shutter its juvenile hall earlier this year and “eliminate the jailing of children.” Instead, San Francisco will now explore community-based facilities that include “mental health services, job training, and other support systems” for youth offenders. In Illinois, there has also been a long concerted effort to close down youth prisons, with successes as early as 2013.

In New York, the abolition movement has also been gaining traction. In 2017, Mayor Bill de Blasio announced a plan to close the Rikers Island jail within a decade and replace it with “a network of modern and humane borough-based jails.” Since then, the coalition No New Jails NYC has been advocating to replace jails completely with alternatives to incarceration. “Just recently, people thought we were out of our minds,” Pilar Maschi, a Bronx-based abolitionist, told Gothamist this year. “But abolition is contagious. It’s idealistic, and I’m okay with that. I think we should strive for what we want, not just accept what we have.”

In LA, the abolition movement is also seeing growing support. In the last year, about 247,000 residents have signed on to support a 2020 ballot measure reforming LA County jails, which, if passed, would allow the LA County Sheriff’s Civilian Oversight Commission to conduct a comprehensive analysis of how it can both study and assess the best ways to reduce the jail population and provide alternatives to incarceration. It will also give the commission subpoena power to compel personnel to give testimony, which would help them identify misconduct in policing.

With partnerships ranging from the Anti Recidivism Coalition to the Million Dollar Hoods research program  to the Trans Latina Coalition, the LA campaign has prioritized the voices of those directly impacted. Abolition, said Michaé Pulido, policy director for the Trans Latina Coalition, “is a focus on asking for the basic needs for people. As a service provider to our trans community, we’ve shown by example how community alternatives to incarceration work.”

“There’s still such a negative relationship with police and trans people and people of color in general, and trans people have been at the forefront of abolition work that has gone unnoticed,” she added. 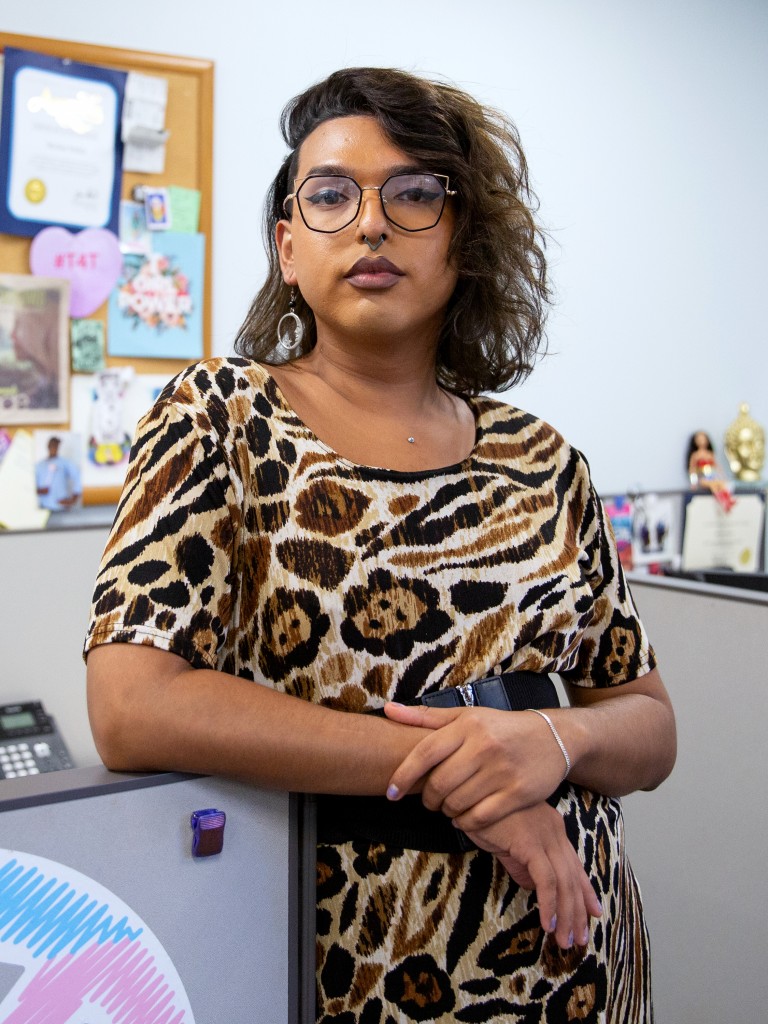 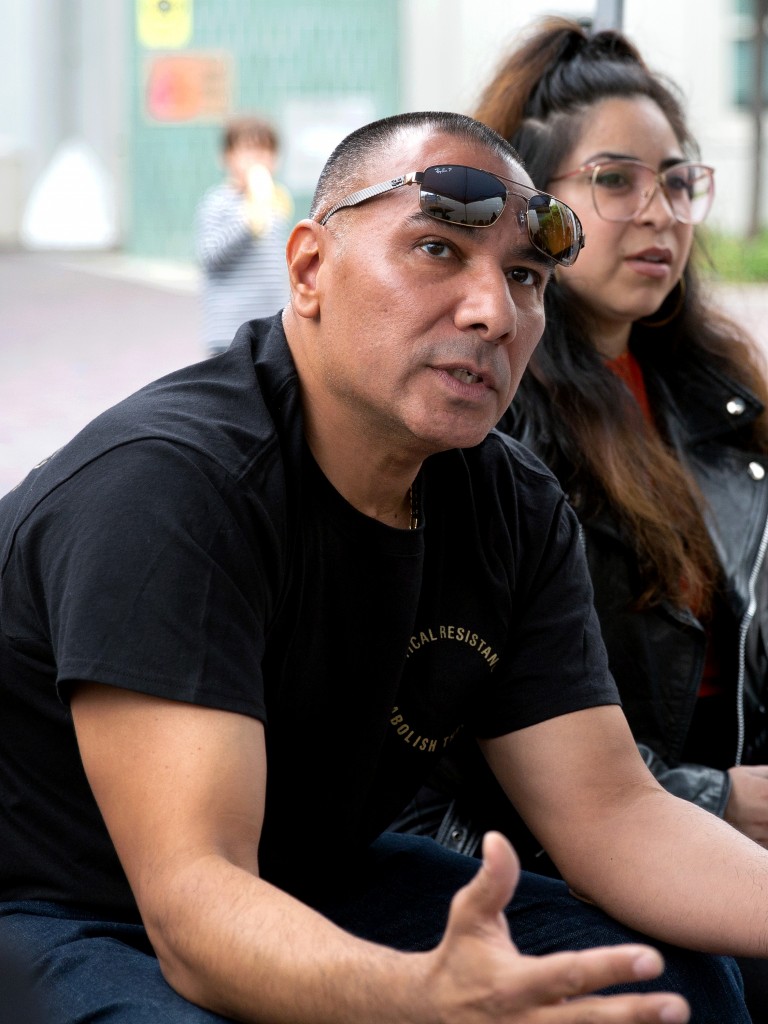 Left/top: Michaé Pulido, Director of Policy for the Trans [email protected] Coalition, at their office in Los Angeles. Right/bottom: Michael Saavedra, a legal consultant for the Youth Justice Coalition and an organizer with Critical Resistance, speaks with community members at the Mother’s Day event.Photos: Arlene Mejorado for The Intercept

JustLeadershipUSA’s Eunisses Hernandez said the historic win this week to stop the jail is what happens when we follow the lead of femmes, survivors of violence, and people who are formerly incarcerated. “None of this would’ve been possible without the femme labor — both in the organizing and system actors. … They did the day today,” Hernandez told The Intercept.

The act of closing down a jail is only one way of practicing abolition. Michael Saavedra, a legal consultant for the Youth Justice Coalition and an organizer with Critical Resistance, was previously a key organizer in the Pelican Bay State actions, including a hunger strike, between 2011 and 2015. He told The Intercept recently that “abolition is not a simple act, but a collection of immediate servicing too [that also] maintains a vision of what a just world can look like.”  Saavedra also runs clinics for formerly incarcerated people on how to expunge their records and helps consult re-entry groups in community colleges. Shutting down the McCarthy contract, Saavedra said, “is only the beginning.”

John Bolton Tried His Best to Draw the U.S. Into a War. Luckily, He Failed.

Are We on the Verge of a Global Financial Collapse