Crawfish Caleb had no issue with the beer being served at the crawfish festival; it was the main course he… 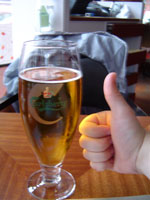 Crawfish Caleb had no issue with the beer being served at the crawfish festival; it was the main course he found problematic.

When first invited to attend the Cajun Crawfish Fest in Baton Rouge, Louisiana, crawfish Caleb Mattingly was extremely gratified to learn that his fellow Louisianans so appreciated his contribution to the eco-diversity of the bayou regions that they'd planned a whole event in his honor – until he caught wind that the crawfish festival wasn't actually much of a festival for crawfish like himself.

Caleb's first clue that the planners of the festival might have ulterior motives was the huge pots of boiling water that seemed to be everywhere.

“I am a fan of fresh water,” noted Caleb, “but certainly not at those temperatures. Right then, I got a bad feeling. I could tell those folks were up to something sketchy."

Then, Caleb noticed the festival planners unloading boxes teeming with crawfish – whom they proceeded to toss, live, into the pots of boiling water, as festival guests chugged beer, danced to Cajun tunes, and scarcely seemed to notice what was happening to their supposed guests of honor. Caleb could only look on helplessly while his friends were slaughtered.

“I felt terrible, of course, that I couldn't do anything to help my buddies," said Caleb sorrowfully. "What can I say? I was blindsided. We all were.”

At that point, however, Caleb realized that his own life was at risk. "I knew right then it was time to skedaddle," he said. "How stupid do these people think I am?"

Caleb admits that he still harbors some bitterness toward the people who invited him to the Cajun Crawish Fest in the first place.

“People like to tell me that I'm not kosher,” said Caleb. “But to me, what those folks did to me and my friends wasn't kosher at all.”

With a rueful shake of his head, he remarked, "Humans – can't trust 'em farther than you can throw 'em. Boy, have I learned my lesson there.”