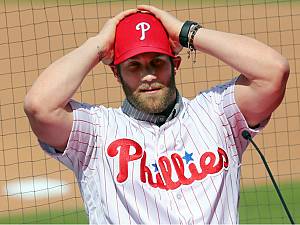 The Phillies will pay Harper $ 330 million over 13 years—the most expensive contract in Major League Baseball history—and Harper will net approximately $ 184 million after paying his due in federal, state, and local taxes, according to an analysis by Robert Raiola, director of the Sports and Entertainment Group, which helps athletes and celebrities with tax planning.

That’s a huge tax bill, but it’s smaller than what Harper would have owed had he signed with one of the two top bidders for him during this year’s free agent signing period. The San Francisco Giants reportedly offered Harper a 12-year contract worth $ 310 million—a higher annual salary than what the Phillies offered—but Harper would have netted only $ 161 million from that deal because of California’s higher taxes. In order to offer Harper as much in take-home pay as the Phillies did, San Francisco would have had to pay $ 340 million over 10 years.

I’m told Giants made a 12-year, $ 310 million offer to Bryce Harper. They were willing to go higher but would have had to go well over $ 330 million to get it done because of California taxes.

The Los Angeles Dodgers also jumped into the Harper sweepstakes, reportedly offering the outfielder a four-year, $ 168 million contract. Harper would have netted $ 89 million from that deal, according to Raiola.

Only Harper and his agent know whether taxes played a role in the decision to sign with Philadelphia. But the prospect of pocketing an additional $ 23 million (and getting to play half his games in a much more hitter-friendly ballpark) would seem to be a strong incentive to pick Philadelphia over San Francisco.

He would hardly be the first athlete to make such a decision for such a reason. In 2014, one reason Trevor Ariza left the National Basketball Association’s Washington Wizards to sign with the Houston Rockets was because he “could pocket more money because the state doesn’t tax income,” The Washington Post reported at the time.

“As taxes rise in many states, no-income-tax states like Texas, Florida, Washington, Tennessee, and Nevada may become increasingly attractive to athletes, entertainers, and other high-income producers,” writes David Boaz, executive vice president at the Cato Institute.

Pennsylvania might not be on that list, but the state’s flat income tax of 3.07 percent makes it one of the more attractive places for highly paid athletes (or for not-so-highly-paid Average Joes) among states that do collect income taxes.

Professional athletes end up having to pay taxes in every state where they play, so Harper will still have to pay higher tax rates when the Phillies go on the road to visit California or New York or elsewhere. But he’ll save a significant amount by having half his games in Pennsylvania.

.⁦@theaceofspaeder⁩ a look at the taxes #MLB players will pay as they travel around the league pic.twitter.com/s5Td4ZQktA

Meanwhile, Philadelphia charges workers a wage tax of 4 percent if they live inside the city; those who live elsewhere and work in Philadelphia pay only 3.5 percent. According to an analysis by The Philadelphia Inquirer, Harper could save $ 7.5 million over the course of his massive contract simply by choosing to live outside the city—something that really exposes the weird incentives created by Philadelphia’s wage tax, one of the highest such taxes in the country.

Harper’s situation is an extreme case, since most of us don’t have the luxury of figuring out how to avoid paying higher taxes on $ 330 million. But migration data consistently show that tax rates are at least part of the reason why people choose to live and work where they do. That’s part of the reason why high tax states like Connecticut are seeing an exodus of taxpayers and why Illinois struggles to attract investment.

If Harper’s contract pays off for Philadelphia in the form of a World Series championship, Phillies fans—including yours truly—might have to thank California lawmakers for making their state less attractive than Philadelphia, which is really saying something.

The Monetary System Will Be Reformed, And Gold Will Be Called Upon