Dust particles from the mat under an electron microscope An Englishman living in the Thai capital of Bangkok, has revealed… 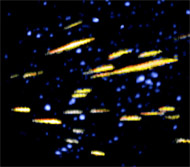 Dust particles from the mat under an electron microscope

An Englishman living in the Thai capital of Bangkok, has revealed the incredulousness he felt at the amount of dust present on his doormat when he shook it out yesterday.

Originally from Hull in East Yorkshire, Moys Kenwood told of his ‘shock and horror’ at the dust, which he described as being “of lunar proportions”. He said:

“I fully realise that, through constant trudging over, and wiping feet on, doormats, they are not going to be very clean, but nothing had prepared me for the excessive numbers of dust particles that leapt off that mat once I shook it out of the window – much to the consternation of some of my Thai neighbours who live on lower floors.
I was taken aback.”

According to Kenwood, this was “probably the first time in two months” that the mat had been shaken out.

Dust experts were not surprised at the news, however.

One, Dr Timmy Microbe, of the University of Papua New Guinea, said:

“Dust tends to accumulate much more quickly and in larger quantities in very hot climates, and this is exacerbated by lazy bastards not doing their cleaning often enough.”