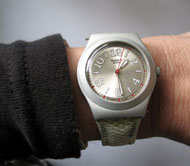 A teacher has told of how an enormous build-up of air in his intestine led to him releasing a fart that lasted about 25 seconds.

Moys Kenwood, 55, had been sitting at a computer, planning a lesson for about one hour, when he felt that he needed to expel some wind. This feeling then subsided, however, and he remained online.

After he had finished his lesson-planning, he went to wash his hands in the restroom, because you never know who's been using a computer these days. As he stooped low to rinse his hands, he again experienced the ominous rumbling feeling in his gut, and knew – right there and then – what was in the pipeline. He took a quick glance over both shoulders to make sure that nobody was within earshot, and then applied downward pressure on his rectum.

A low drone emerged, which increased in tone as he bent his knees and pushed down on his stomach and bowel muscles. As the fart progressed, the pitch also rose, until it was almost a whistle, and then 'a screeching', before, finally, it trailed off into history.

"It was odd. I felt lighter afterwards. It went on and on. And on. It must've been about 25 seconds!"

But a boy with a timing device, who was lurking just around the corner, out of sight, said this estimate was a gross exaggeration.