The snot-drenched hanky after washing today An unexpected change in the weather conditions caught one man unawares this week, and… 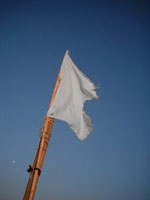 The snot-drenched hanky after washing today

An unexpected change in the weather conditions caught one man unawares this week, and the cold he got caused his nose to run all day long, and at the most inconvenient of times.

Moys Kenwood, 55, of Tapon, woke on Friday morning with a runny nose and a throat that felt as if he'd been eating gravel. He wondered whether or not he should go to work, but as it was Friday – payday – he thought he would make the effort.

He soon wished he hadn't, however.

Thursday's scorching heat had been followed by a cold snap, and temperatures had plummeted to around 22°C – winter had arrived!

Kenwood arrived at work sniffing, sneezing, and coughing, whilst waving his once-white handkerchief like a flag of surrender. His choking sounds, as the nasty, green phlegm stuck resolutely in his throat, could be heard all around the school.

Every thirty seconds, he would feel a rivulet of watery snot tickle the insides of his nostrils – as it made its way towards freedom – and make a desperate grab for his now-soaked gray rag.

Sometimes he was quick enough, and sometimes, he wasn't.

Sometimes, this was in a classroom full of children who howled with laughter at the sight of this foreigner doing his best to impersonate a leaking tap.

This scene repeated itself all day long. Eventually, the handkerchief became so wet, that using it started to make his nose and cheeks sore, so, improvising, he used his jacket sleeve instead.

Coughing up mucus as if each breath were to be his last, Kenwood collected his bag of peanuts, and trudged off home, his beak streaming as he went.