Stan at his 104th birthday party A man who had spent several decades constantly worrying about his future, had his… 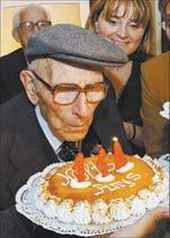 Stan at his 104th birthday party

A man who had spent several decades constantly worrying about his future, had his very worst fears confirmed at the beginning of this week, when he finally dropped dead.

Stanley Mann, 107, was in perfectly good health for a man of his age, took regular exercise, ate a balanced, varied and nutritious diet, and suffered from no long-term health issues, but this did not stop him from incessantly fretting that he was going to die.

He kept a strict routine over his sleeping pattern, going to bed at 9pm, and rising at 6am for the last 60 years, and, living in the suburbs surrounded by green belt land, and near a small lake on which he sailed a small boat and went fishing, his lifestyle was idyllic.

But, lurking in the shadows at the back of Stanley's mind, he always suspected that death was 'just around the corner'.

On Saturday, as he left his aerobics class, and climbed aboard his Kawasaki 750cc motorbike that he had bought himself as a present on his 100th birthday, Stanley slipped on a banana skin left thoughtlessly on the road by some moron or other, and smashed his head on the concrete, breaking every bone in his body, and spilling his brains over a wide area.

Ambulance staff who removed his body from the scene, said:

"It was a one-in-a-million chance that he should step on that banana skin, and fall in such a way that he should die like that. I guess he was just unlucky."