Activists took to the streets of London a day after the UK cabinet expanded its guidelines for mandatory face coverings…. 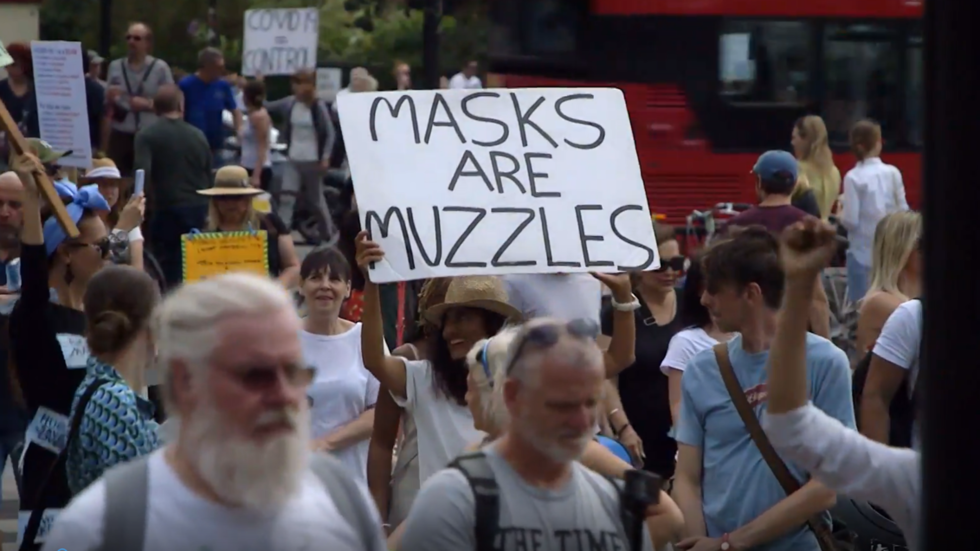 Activists took to the streets of London a day after the UK cabinet expanded its guidelines for mandatory face coverings. The demonstration comes amid growing skepticism worldwide over the efficacy of such policies.

A large group of demonstrators assembled in Hyde Park on Saturday, where they listened to speeches denouncing the government’s anti-coronavirus measures. Piers Corbyn, brother of former Labour leader Jeremy Corbyn, was among the speakers.

Carrying placards reading “Stop the new normal, save lives,”“Freedom over fear,” and “Masks are muzzles,” the protesters then marched towards Downing Street, stopping outside BBC headquarters along the way.

The Anti-Mask March went from an earlier rally at Marble Arch which then progressed down through Oxford Street left at Regent Street then proceeded towards the BBC centre #KBFpic.twitter.com/wZRq0ekqqb

Footage from RT’s Ruptly video agency shows a huge crowd, most without masks, filling the streets of the UK capital as they marched toward Downing Street.

One demonstrator who spoke with Ruptly said that he had concerns about mandatory face mask rules.

Face coverings were recently made mandatory in shops and supermarkets in England. Prime Minister Boris Johnson announced on Friday that masks will also be required in museums, cinemas, art galleries, and places of worship starting on August 8. He also pushed back by two weeks the reopening of businesses and venues such as skating rinks, bowling alleys, and casinos.

Like many countries, the UK has experienced an uptick in new coronavirus cases. With the highest death toll in Europe, Downing Street has begun to reimpose local lockdowns and other strategies purportedly designed to stop the spread of the virus. There is also wide debate about whether there is a scientific basis for many anti-coronavirus policies. The Dutch government recently announced that it would not advise the public to wear masks, arguing that there is not enough evidence that they are effective.

US Election 2020: Biden is crowned as Democratic nominee