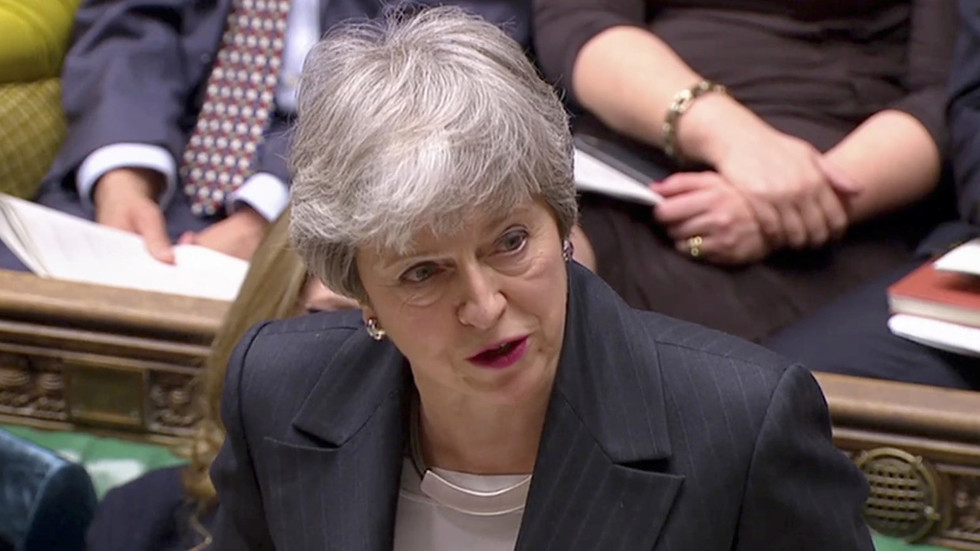 Prime Minister Theresa May has announced that she has written to the EU to request a short extension to Article 50, insisting that she is not prepared to “delay Brexit any further than June 30.”

Addressing a raucous group of British lawmakers in the House of Commons during PMQs, May confirmed that she had written to European Commission President Donald Tusk on Wednesday morning to request the short delay.

Corbyn accused the PM of “incompetence” and “failure” over Brexit, insisting that the prime minister “has no plan” before asking May whether she will meet him to sort out the Brexit mess – to which May could give no direct answer.

SNP Westminster leader Ian Blackford issued the PM with a veiled threat to hold another Scottish independence referendum “if Westminster fails,” unless her Tory government agreed to a second EU referendum.

Jean-Claude Juncker, the president of the EU Commission, has reaffirmed Brussels’ position on a possible extension to Article 50. He has insisted that a deal needs to be signed off between the UK and EU before European Parliament elections on May 23.

Junker claims this is necessary, otherwise the UK has to participate in those elections. It means May runs the risk of the EU not granting an extension to June 30, but to May 22.

BREXIT-EU's Juncker says that the withdrawal agreement has to be finished before the May 23 EU Parliament elections, otherwise the UK has to participate in those (not something the UK wants) so risk that PM May will NOT get the extension to June 30 but to May 22

So @JunckerEU ends the speculation about how long A50 can be extended without UK taking part in EU MEP elections. If the UK is still an EU member when the elections take place (May 23-26, 2019), the UK must take part in those elections. That's the treaty. https://t.co/2oB7gFMI2Q

In her letter to Tusk, May blames UK parliamentarians and House Speaker John Bercow for the delay request. The PM goes on to express her hopes that the EU27 will ratify concessions she received from Juncker last week. She then intends to bring her deal back to parliament for a third meaningful vote, before leaving the bloc by June 30.

Here’s May’s letter. She blames MPs and Speaker for the delay; says she hopes EU27 will ratify the concessions she got from Juncker last week – and then she’ll bring her deal back to the Commons for MV3; and leave by the end of June. pic.twitter.com/cVizKQ2TBZ

Since the withdrawal deal was agreed between May and the EU back in November, it’s been comprehensively rejected twice by the House of Commons, leaving the prime minister humiliated and, seemingly, on the brink of being ousted as leader.