Spread the love New Orleans, LA — Frequent readers of TFTP know too well how many beloved family pets are… 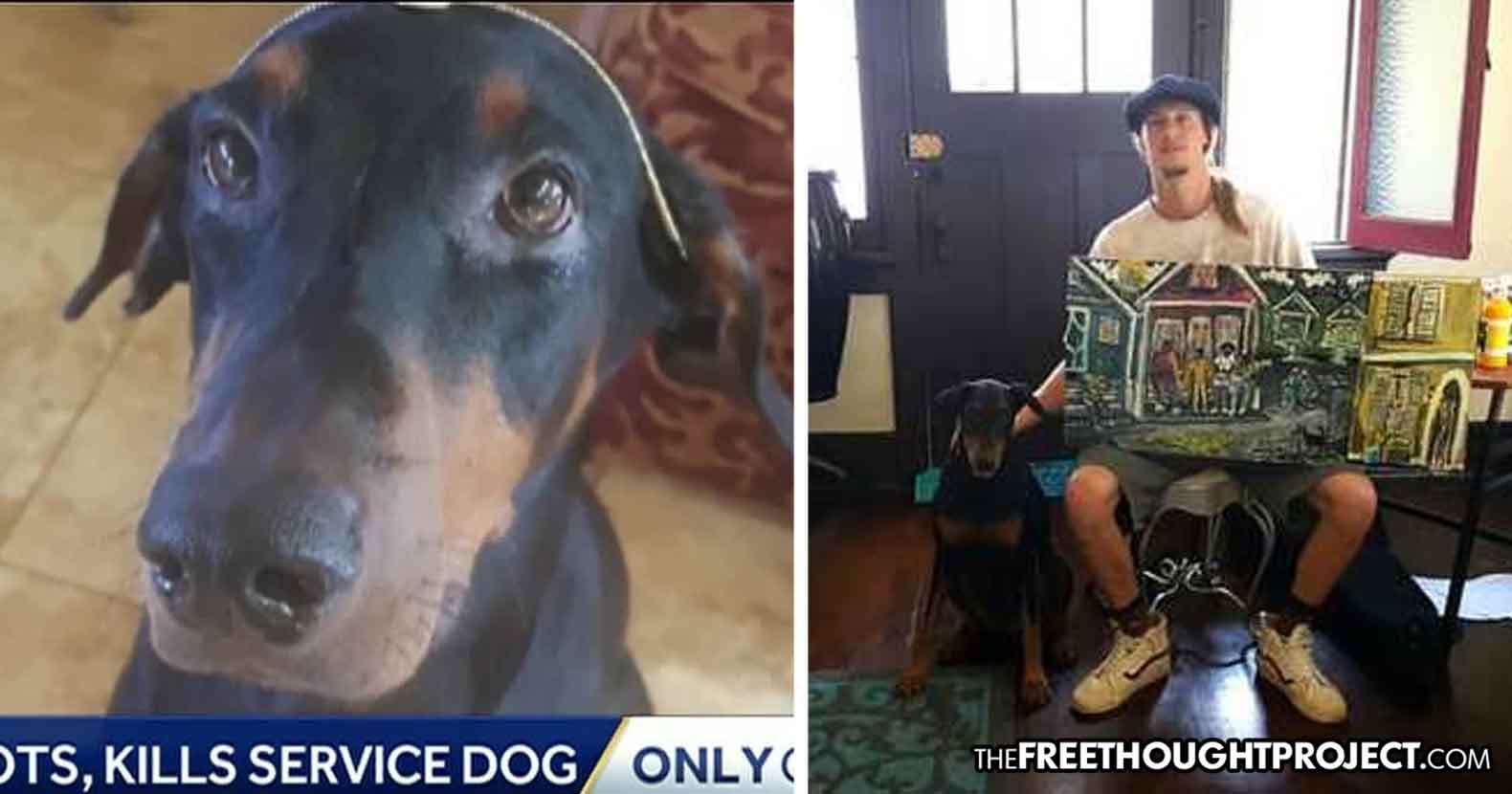 New Orleans, LA — Frequent readers of TFTP know too well how many beloved family pets are gunned down every year by public servants in the U.S. It happens so much that there is a term for it called “puppycide.” We have an endless archive of stories in which dogs meet their untimely ends at the end of a cop’s gun. The following story out of New Orleans is one of these dogs. Now, however, a mentally ill veteran is suffering immeasurable sadness because the dog cops killed earlier this month was his service animal who trained to keep him stable.

The New Orleans police department is now investigating the shooting of Clayton Crawford’s service dog that unfolded earlier this month. Crawford, who suffers from bipolar disorder and PTSD, said he let out his dog Hilo in his backyard to use the bathroom but he would never come back.

Crawford’s backyard is not fenced in, but he’s never had any instance of his dog attacking anyone. According to Crawford, Hilo is not aggressive and he wants to know if force was necessary, and why the officer did not use a Taser. Nevertheless, as he let out the dog, he heard four gunshots. Having PTSD is bad enough with a service animal, but imagine suffering from PTSD and hearing and seeing four gunshots that all went into your service animal. It was horrifying for Crawford.

“It’s been just spasms of crying and wailing since it all happened. All I have left of her is her toys and blanket she was laying on and laying with me every night,” said Crawford. “I’m still crying over it, seeking her comfort. The trauma is just so big.”

After they killed his dog, police originally released a statement claiming the dog bit an officer. However, this was a lie. They were later forced to admit that no such bite took place. Last week, NOPD released the following statement regarding the incident:

“On January 2, 2020, a shooting involving a NOPD officer occurred near the intersection of North Dupre and Onzaga Street in the First District.

“As a result, a dog was killed.

“During ‘use of force’ incidents, the NOPD has protocols in place to relay information regarding these incidents to the public.

” Unfortunately, in this case that procedure was not followed and resulted in a premature report to the media that the dog bit the officer.

“At no time did the officer involved in this incident report to investigators that he was bitten by the animal, nor was the officer actually bitten.

“Furthermore, officers with the NOPD never want to resort to using force.

“Unfortunately, in this instance, the involved officer felt it was unavoidable.

“Both, the officer and Deputy Superintendent Arlinda P. Westbrook have been in contact with the dog’s owner to express their remorse for this unfortunate incident.

“There are no further details available at this time.”

NOPD has declined to go on record as to why the cop shot the dog and could not tell local media why they killed it.

“My dog didn’t attack the officer,” Crawford said. “She barked at him and rushed at him, that’s it.”

Crawford said he then watched as the officer pulled a weapon on his “best friend.”

To be clear, Crawford’s dog was not simply claimed to be a service dog by Crawford, Hilo was assigned to Crawford for his PTSD. Now, Crawford has no idea how he is going to move forward.

“That dog was trained to help me, and now I’ve lost her forever,” Crawford said.

Sadly, cops killing dogs — including those belonging to entirely innocent people — is a common occurrence.

According to an unofficial count done by an independent research group, Ozymandias Media, a dog is shot by law enforcement every 98 minutes.

This disturbing trend led to WGRZ-TV in Buffalo, filing a Freedom of Information Act request for use of force incidents within the Buffalo police department which is right down the road from Rochester. What they found was shocking.

According to use of force reports requested by WGRZ-TV under the Freedom of Information Law, Buffalo Police shot 92 dogs from Jan. 1, 2011 through Sept. 2014. Seventy-three of those dogs died. Nineteen survived. This is just one department.

Amazingly enough, pizza delivery drivers and postal workers don’t seem to have much of a problem interacting with dogs, and they are in the same situation that police are in, going to a stranger’s house with no clue what to expect. In fact, these delivery workers actually knock on more strange doors and encounter more dogs in just a week than many police officers do in their entire careers.

UPS workers accidentally made this point quite clear with a Facebook page last August showing delivery drivers having fun with dogs. In the meantime, cops continue to kill and are almost never held accountable.

Something has to be done and it is far more than just training. The most effective action that would need to be taken would be to drastically reduce the instance of no-knock search warrants. According to an ACLU report, 62 percent of SWAT raids are searches for drugs.

If we want to end puppycide, we have to end the drug war, the two are not mutually exclusive.

Congress Fiddles While Trump Lurches Toward War on Iran