The former Republican US presidential candidate and incoming senator for Utah, Mitt Romney, has launched a scathing attack on Donald… 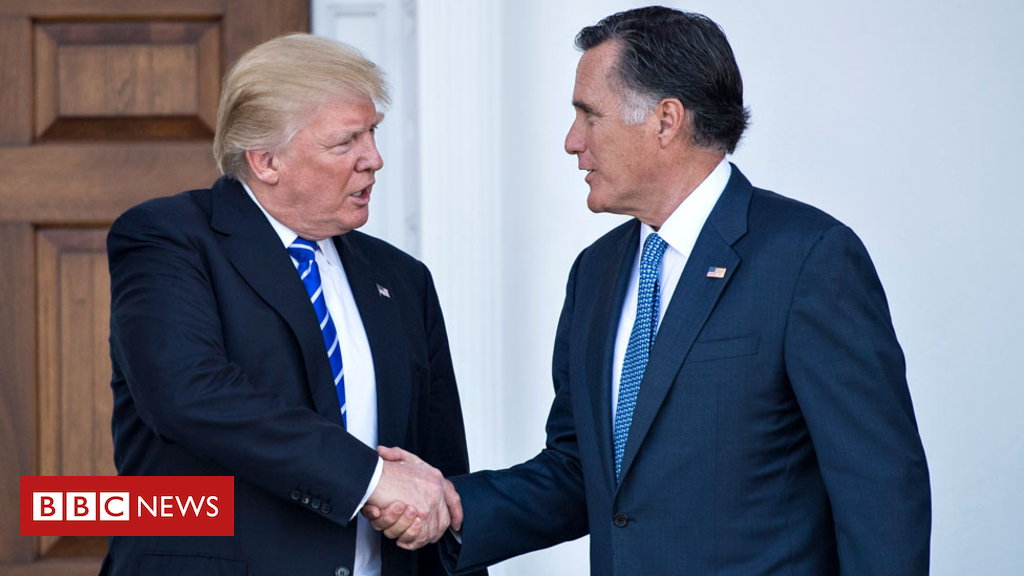 The former Republican US presidential candidate and incoming senator for Utah, Mitt Romney, has launched a scathing attack on Donald Trump, saying he has caused dismay around the world.

Writing in the Washington Post, he said the US president had not “risen to the mantle” of the presidency.

Mr Romney has been fiercely critical of Mr Trump before but won his backing for his run in Utah.

Mr Trump hit back by tweeting, “I won big and he didn’t.”

However, while he drew a comparison with Jeff Flake, the outgoing Republican senator who last year attacked Mr Trump as he announced his retirement, Mr Trump sounded conciliatory, calling for Mr Romney to be a “team player”.

The timing of Mr Romney’s article, just two days before he is sworn in, has prompted some to speculate he is positioning himself as a challenger to Mr Trump securing the Republican presidential nomination.

What did the opinion piece say?

In the article, Mr Romney praised many of Mr Trump’s policies, such as his tax reforms and appointment of conservative judges, and crackdown on “China’s unfair trade practices” – polices which he said “mainstream Republicans” had promoted for years.

But he went on to say: “With the nation so divided, resentful and angry, presidential leadership in qualities of character is indispensable. And it is in this province where the incumbent’s shortfall has been most glaring.”

Mr Romney said he would support the president in policies he thought were in the best interests of Utah or the US but speak out against actions “that are divisive, racist, sexist, anti-immigrant, dishonest or destructive to democratic institutions”.

“The appointment of senior persons of lesser experience, the abandonment of allies who fight beside us, and the president’s thoughtless claim that America has long been a ‘sucker’ in world affairs all defined his presidency down,” he wrote

“Trump’s words and actions have caused dismay around the world.”

The world “needs American leadership”, he argued, and “the alternative… offered by China and Russia is autocratic, corrupt and brutal”.

What’s the reaction been?

Mr Romney’s article has been widely discussed and covered across US media. Several outlets suggested that Mr Romney was positioning himself to be Mr Trump’s leading critic in Congress.

The New York Times said much of the essay “sounded like the makings of a primary challenge against Mr. Trump from Mr. Romney”.

On social media some praised Mr Romney, others said he should have gone further. Conservative commentators and pro-Trump writers have accused him of duplicity and opportunism.

What @MittRomney either fails to realize or hopes that we do is that Trump’s wretched character is not the primary crisis that we all face. The president’s policies—many of which Romney praises here, along with his judicial appointments—do the most damage. https://t.co/rC0sClU0CK

I get the skepticism over Romney, but we keep demanding R’s speak out against Trump, and he just did. It matters, he should be applauded for it, and I wish more would join him. Now let’s see what he does in the Senate.

Mitt Romney really could have written that at any time, but he waited till after the election and only a few days before his swearing in. He has really mastered senatorial behavior and will fit in fine.

What kind of relationship do the two men have?

A complicated one. During the 2016 campaign, Mr Romney said Mr Trump had neither “the temperament nor the judgement to be president” while Mr Trump called Mr Romney a “choke artist” and called his bid for the presidency in 2012 “the worst ever”.

The same year though, the pair met for dinner amid reports Mr Trump was mulling appointing Mr Romney as his secretary of state.

Mr Romney has also taken issue with Mr Trump labelling the press the “enemy of the people” as well as his response to a violent far-right rally in Charlottesville.

When US Congress reconvenes on Thursday, Mr Trump faces a new challenge on the domestic front – in November’s mid-terms the Republicans strengthened their hold of the Senate but lost the House of Representatives.