Nigel Farage slammed the BBC in a combative and awkward interview with host Andrew Marr on Sunday. The fiery exchange… 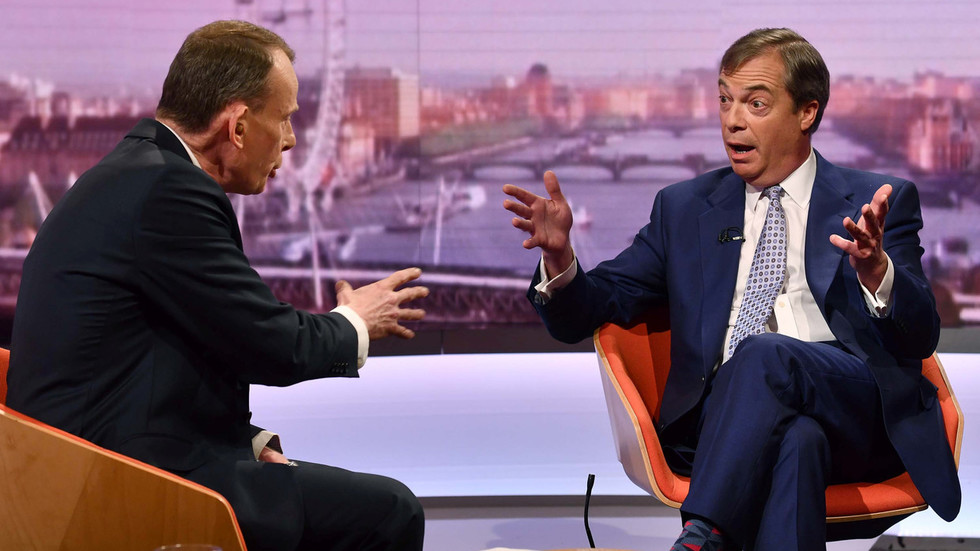 Nigel Farage slammed the BBC in a combative and awkward interview with host Andrew Marr on Sunday. The fiery exchange saw the Brexit leader accuse the broadcaster of being “ridiculous” and in denial about the European elections.

The interview quickly turned tetchy when Marr asked Farage about his past comment that worrying about global warming was “the stupidest thing in human history.” Farage said he thought it wasn’t “terribly intelligent” to tax the UK “to the hilt” and put people out of work, but then blasted the host for not discussing the Brexit Party and the upcoming European Parliament elections instead of his previous statements.

“What is wrong with the BBC?” he repeated as Marr ignored his comment and asked him about gun control. Neither party appeared interested in engaging in a conversation.

“This sums it up,” Farage said, pointing out he had been talking at packed rallies and that the BBC wasn’t there, “and from this line of questioning, I can see why.”

Marr continued to pepper the politician with questions about his past comments before Farage blasted his approach.

”I’ve never in my life seen a more ridiculous interview than this,” the 55-year-old said, going on to accuse the BBC of being in denial about the reality of what is going on in politics and warning they were in for a surprise when the results of the European elections are revealed.

When asked whether he still admires Vladimir Putin, Farage asked what the relevance of this was. “I’m trying to work out who you are and where the Brexit party, which wants to destroy the two-party system, is going,” a frustrated Marr responded.

“You haven’t asked about a single other member of the Brexit Party,” Farage said. “You haven’t commented on the fact that we have the most diverse list of candidates of any party fighting in this election.”

The interview garnered a lot of reaction on social media with many agreeing with Farage that the BBC did look ridiculous, while others criticized both the politician and the host for their behavior.

Liberals will have loved Marr attacking @Nigel_Farage like that… but it will only have strengthened Farage’s popularity with those who voted Brexit. As with Trump, over-demonising him empowers him.

I am no fan of Farage but I totally agree with him on this, that was a shocking interview by Marr and the BBC. The game there was to stick to an editorial line, that line is to embarrass and discredit those who don’t fit their agenda. It blew up in their faces there.

Millions would agree. Watch this and you realise the BBC’s bias is insidious. Marr clearly set out to do a hatchet job on Farage that he would never have done with any other politician. Disgraceful. pic.twitter.com/9bKqmPEt52

This is laughable. He accuses the BBC of bias when he’s on there multiple times a week. He falls apart like a cheap suit when pressed on any other domestic or global policy question. The man is an absolute fraud. I pity those who can’t see through it

From Nigel Farage to Change UK, politicians refuse to set out their policies, and then treat any scrutiny of their objective political records as practically harassment or abuse. pic.twitter.com/8wrZfO3Epo