Spread the love      Tweet    Unless you’ve been under a rock for the last several days, you have likely… 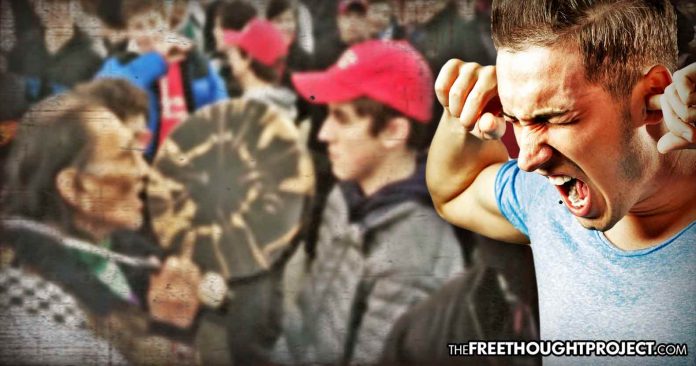 Unless you’ve been under a rock for the last several days, you have likely seen what could go down in history as one of the most mischaracterized, yet most divisive videos ever reported in the media. The video, showing an odd confrontation between a white teenage boy and a Native American veteran has served as a catalyst for calls of killing children, burning down schools, and even prompting Disney film producer Jack Morrissy to call for the killing of #MAGAkids. 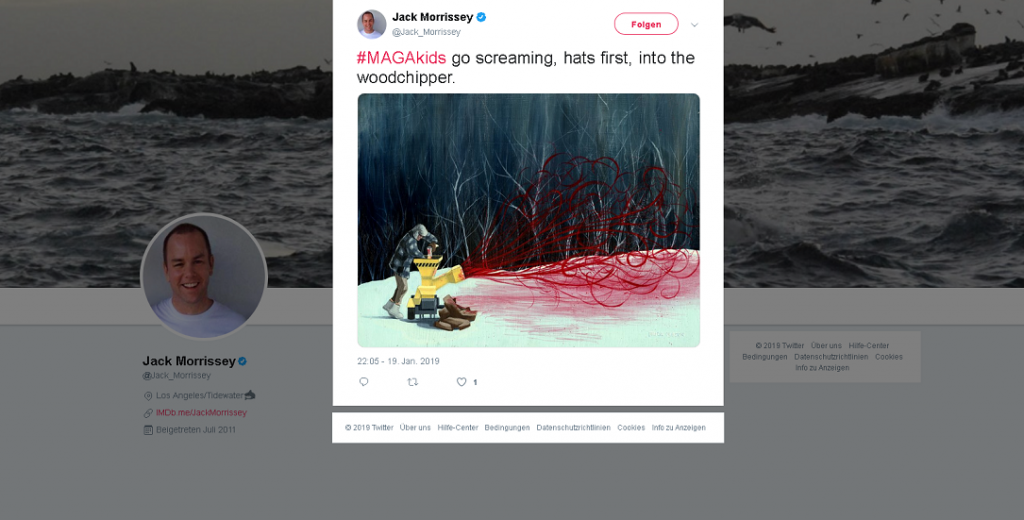 The mainstream media, who is devoted to stoking hatred and divide among Americans is likely seething with vitriolic pride in the horrific hate storm they whipped up by pitting white Trump supporters against Native Americans and their supporters.

As stated yesterday, what this case illustrates is the media’s power to manipulate outrage among those who blindly consume it. By failing to tell the entire story, preconceived stereotypes are used to stoke a divisive picture that is destined to get clicks and views.

Society’s own biases are being used against us to sell false hatred and it’s making these companies billions of dollars.

To further back up this claim, we need only look at the selective outrage when it comes to reporting on the plight of Native Americans and the almost non-existent coverage by the mainstream media when this group is being actively abused, mistreated, and even murdered.

Over the weekend, a kid wearing a MAGA hat creepily stared into the eyes of a Native America man and the media took this non-story and whipped it into a proverbial shit storm of controversy. There have been countless op-eds and articles decrying the MAGA wearing boy and his entire school and endless hours of talking heads parroting the false narrative that this boy was some how a member of the ku klux klan.

But where was this same media when Native American Jorden Stevens, a member of the Cocopah Indian Tribe in Yuma, Arizona was beaten to death by ten cops—on video—and no one was charged?

Even though Stevens’ death was ruled a homicide and his death recorded on the cameras of the Yuma County Sheriff’s Office (YCSO) Adult Detention Center, not a single officer was charged. Surely, a Native American man being beaten to death by ten agents of the government after being held in jail over a questionable disorderly conduct charge is a greater travesty than a MAGA hat wearing teen creepily staring into the eyes of Nathan Phillips in front of the Lincoln Memorial. Apparently it was not.

Where was this same media when Native Americans were being beaten, gassed, and even shot in North Dakota as they peacefully defended their sacred land during Standing Rock?

No matter what your take on the incident is, one thing is clear… the MSM showed more concern for indigenous people when it looked like they were being harassed by MAGA-hat wearing kids than it ever did when they were being targeted and harassed by police at Standing Rock.

TFTP was in Standing Rock at the time and reported on the countless atrocities carried out against the peaceful protesters by private contractors and police alike. As Claire Bernish wrote at the time:

Amid a relentless haze of tear gas and weaponized water, a tribal elder went into cardiac arrest, twice, one man suffered a grand mal seizure, a young woman was shot in the head with a rubber bullet and may have permanent eye damage, a man vomited blood after a rubber bullet to the stomach caused an internal injury, and a young woman, Sophia Wilansky — who traveled from New York City to assist in protecting the water — might lose her arm after a concussion grenade tore through flesh all the way to the bone.

Medics from the Standing Rock Sioux and Cheyenne River Sioux Tribes reported 26 people hospitalized and around 300 injured, dozens suffered hypothermia from being soaked by police in 23° Fahrenheit temperatures. Medics and witnesses observed police intentionally shooting rubber bullets and other ‘less than lethal’ projectiles at people’s heads and legs — and that officers appeared to purposefully target journalists and anyone helping the wounded.

Native Americans were being abused en masse in a historical fight to preserve their land and the mainstream media was mum. But that is not all.

Where was the mainstream media when multiple Native American women were being kidnapped in North Dakota and sex trafficked? Where was the media when police were ignoring these horrifying cases that were well documented? They were nowhere to be found, that’s where.

This selective outrage over the MAGA hat video is all but a smoking gun proving that the mainstream media exists for the sole reason to keep us divided to generate clicks and profit from your hatred for your fellow human—all while protecting the corrupt establishment.

If ever there was a time to turn the television off and seek news outside of your comfort zone, that time is now.