Muslim MPs have been sent threatening letters which urge people to carry out acid attacks against Muslims, bomb mosques and… 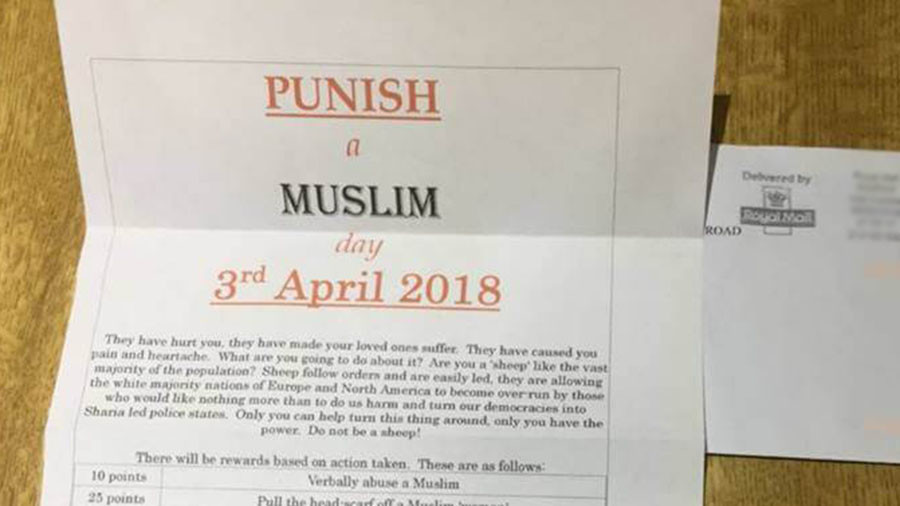 Muslim MPs have been sent threatening letters which urge people to carry out acid attacks against Muslims, bomb mosques and pull off hijabs. The ‘Punish A Muslim Day’ letters are being investigated by counter-terrorism officers.

The MPs were also sent packages with a “suspicious substance” inside. Three people were hospitalized on Monday and Tuesday as a precaution before the items were deemed not to be hazardous.

Labour MP for Bedford Mohammad Yasin received a package on Monday. His colleagues, Labour MP for Bethnal Green & Bow Rushanara Ali and Labour MP for Ealing Central and Acton Rupa Huq, have both tweeted to say they received similar packages.

Thanks for concern after suspect package received at my Commons Office. My staff have had the all-clear apart from one who is being checked out at hospital as he handled the irritant substance. Totally unacceptable for Muslim MPs to face this – just done a BBC interview on it. pic.twitter.com/wrIgE1cYdR

Thx Yasmin for securing the UQ.Have had the extremely unpleasant experience of opening an envelope with very same threatening letter today. https://t.co/AD0BAsHDZU

The letters advertise “Punish A Muslim Day,” which included a points system of Islamophobic actions and each of their “rewards.” The sickening point-scoring system ranges from 10 points if you “verbally abuse a Muslim” to 2,500 points if you “nuke Mecca.”

The letter calling for attacks on Muslim is just the latest example of rising Islamaphobia and deplorable hate crimes in this country. In my UQ to the Minister I called on the Govt. to do more to tackle such incitement to violence and help prevent the growth of such extreme views pic.twitter.com/dVr3ZVusol

The messages were also sent to households across London, Yorkshire, Leicestershire and Nottinghamshire.

The sick letter says: “They have hurt you, they have made your loved ones suffer. They have caused you pain and heartache. What are you going to do about it? Are you a ‘sheep’ like the majority of the population?

“Sheep follow orders and are easily led, they are allowing the white majority nations of Europe and North America to become overrun by those who like nothing more than to do us harm and turn our democracies into Sharia-led police states.

“Only you can help turn this thing around, only you have the power. Do not be a sheep!”

Detective Chief Superintendent Martin Snowden, head of Counter Terrorism Policing North East, said the letter is being investigated. “These letters seek to cause fear and offence among our Muslim communities. They also seek to divide us,” he said.

‘BREAKING – our country’: Brits break down as Boris is confirmed as next prime minister