They call themselves the “Squad.” From climate change to student debt to migrants in detention, progressive House Democrats Alexandria Ocasio-Cortez, Ilhan… 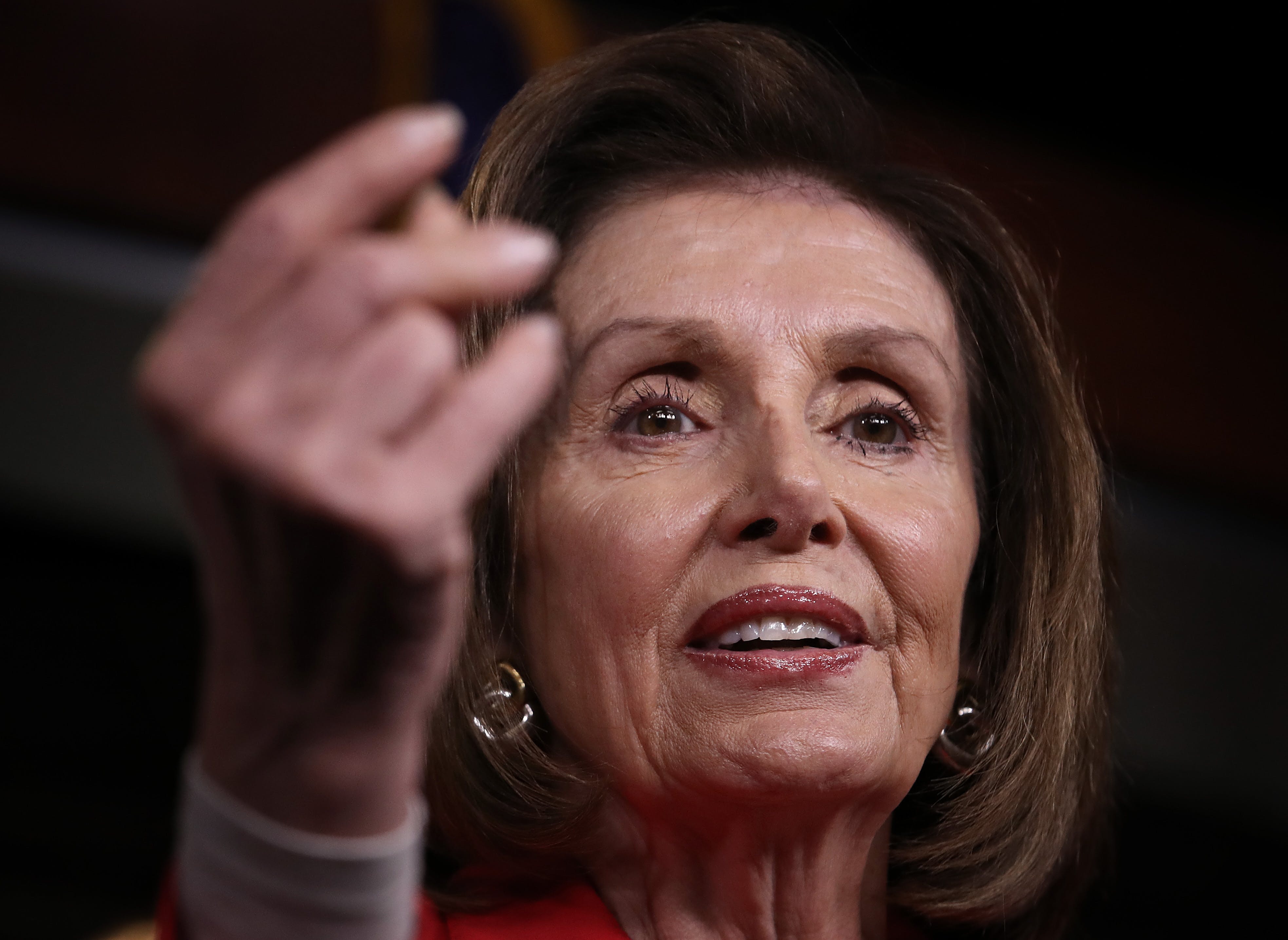 They call themselves the “Squad.” From climate change to student debt to migrants in detention, progressive House Democrats Alexandria Ocasio-Cortez, Ilhan Omar, Rashida Tlaib, and Ayanna Pressley have been energetic and outspoken since getting elected last November — and, as a result, have become inured to constant attacks from congressional Republicans and, of course, Fox News.

But how about from their own boss?

In an interview with the New York Times’ Maureen Dowd, House Speaker Nancy Pelosi dismissed the Squad as “four people” who have their “public whatever and their Twitter world” but don’t “have any following.”

Ouch. This isn’t the first time Pelosi has trolled the left-wing quartet. In April, when she was asked by Leslie Stahl on 60 Minutes to comment on the newly emboldened progressive wing of her party, Pelosi responded: “That’s like five people.”

In the wake of November’s midterms, Pelosi mocked calls from AOC and her allies for a Green New Deal: “The green dream or whatever they call it, nobody knows what it is, but they’re for it right?”

To be clear: none of these freshmen Democrats have personally attacked Pelosi and all four of them backed her bid for the speakership. As CNN’s Nathan McDermott tweeted, “It is pretty notable that the most vocally anti-Pelosi Democrats (ala the moderates in swing districts who opposed her leadership) don’t get as much criticism from her as the left-wing of the party.”

How about Donald Trump? Pelosi is willing to criticize Trump — “I’ve never encountered, thought about, seen within the realm of my experiences as a child or an adult, anybody like this” — but only criticize. Nothing more. Not impeachment, that’s for sure. The top Democrat in the House told Dowd that the president has engaged in criminal behavior but — wait for it — “you can’t impeach everybody.”

The New York Times interview is yet another reminder for liberals and leftists that if they want to oppose Trump, they have to oppose Pelosi too.

First, the rape allegations against the president. On June 21, New York magazine published a cover story from the famed advice columnist and writer E. Jean Carroll, in which she documented in excruciating detail how Trump, back in the mid-1990s, forced “his penis halfway” inside of her in the midst of a “colossal struggle” in a Bergdorf’s dressing room.

Pelosi’s response to a reporter who asked her for comment a whole six days later? “I don’t know the person making the accusation… I haven’t paid that much attention to it.”

Here’s Nancy Pelosi verbally shrugging in response to a question about what she thinks Congress should do about a credible rape accusation against the president. Not great. pic.twitter.com/NPoEUB3jgg

Now, she tells Dowd: “I respect the case she has but I don’t see any role for Congress.”

The sitting Republican president has been credibly accused of having committed a sexual assault and yet Congress, says the Democratic speaker of the House, has no “role” in holding him to account for it. Oh, and the speaker herself hasn’t been paying “attention to it.”

This, my dear liberals, is your (feminist) champion.

Second, the crisis at the border. One of the reasons Pelosi cited for not being familiar with the E. Jean Carroll story was that she was “busy worrying about children not being in their mother’s arms.” Yet on that same day, as the New York Times reported, Pelosi “capitulated to Republicans and Democratic moderates and dropped her insistence on stronger protections for migrant children in overcrowded border shelters” by signing onto a bill from the Republican-led Senate, giving the Trump administration $ 4.6 billion to tackle the situation on the southern border.

Last time I checked, though, this administration’s horrific decision to separate migrant children from their parents had nothing to do with a lack of funds. “The cruelty is the point,” as the Atlantic’s Adam Serwer so memorably put it. Plus, 18 so-called “centrist” Democrats pushed Pelosi into dropping her objections to the Senate bill and yet in her New York Times interview, the speaker decided to level her attack on… you guessed it… the Squad. They made themselves irrelevant and shouldn’t have voted against “our bill,” she told Dowd, adding: “They’re four people and that’s how many votes they got.”

I don’t believe it was a good idea for Dems to blindly trust the Trump admin when so many kids have died in their custody. It’s a huge mistake.

This admin also refuses to hand over docs to Congress on the whereabouts of families. People’s lives are getting bargained, & for what? https://t.co/h7gP8Wous1

Third, Trump’s tax returns. Last Tuesday, almost exactly six months after Democrats won control of the House, they finally took the president of the United States to court to try and force disclosure of his financial records. Trump administration officials and Trump’s army of personal lawyers have offered a range of excuses for refusing to release these records — and for defying congressional subpoenas in the process. But as Slate’s Mark Joseph Stern has noted, one in particular stands out from the rest.

On June 10, in an appeal to the U.S. Court of Appeals for the District of Columbia Circuit, Trump’s lawyers contested the claim that the House’s impeachment power could justify subpoenaing the president’s financial records while gleefully pointing out to the judge that impeachment is not even on the table. They wrote in their brief:

Speaker Pelosi has steadfastly denied that the House’s investigations are in any way related to impeachment. In March, she unequivocally told the Washington Post, ‘I’m not for impeachment.’ In late May, the Speaker reiterated that ‘any suggestion that Democrats are planning to pursue impeachment ‘simply isn’t the truth.’” After she received the district court’s ruling in this case, the Speaker boasted that the Committee had prevailed despite “the fact the House Democratic caucus is not on a path to impeachment.” Just four days ago, the Speaker again told senior Democratic leaders that “she isn’t open to the idea” of impeachment, and Chairman Cummings “sided with Pelosi.”

Is it not a source of shame for rank-and-file Democrats, whether on the left or in the “center,” that Trump lawyers are citing Pelosi’s refusal to impeach him as their defense in court? As their justification for ignoring congressional subpoenas?

Meanwhile, Pelosi herself continues to duck and dodge the arguments in favor of impeachment — even when she happens to be the one making them. “The thing is that, he every day practically self-impeaches by obstructing justice and ignoring the subpoenas,” she told the Times.

Sorry, what is she on about? I may not be a U.S. citizen yet, or speaker of the House of Representatives for that matter, but I have read the U.S. Constitution from beginning to end and I have yet to come across the clause that refers to “self-impeachment.”

So forget the “you-go-girl memes for literally clapping back at Trump” that Dowd fawns over in her interview with the speaker. It is time for liberals and leftists who lambast Senate Majority Leader Mitch McConnell to admit to themselves that the hippie-punching Pelosi has become a Trump enabler too.

We Scoured the Streets of Rio de Janeiro After Gun Fights. Here’s the Story the Bullet Shells Tell.