The first new segment of border wall to be constructed under President Trump will bisect a butterfly conservation center, a…

The first new segment of border wall to be constructed under President Trump will bisect a butterfly conservation center, a historic church, and a state park along the Texas border. The construction is set to begin in February.

In March, Congress appropriated $ 1.6 billion to build Trump’s border wall — his signature campaign issue. But Congress earmarked most of the funding to reinforce or replace already existing segments of border fencing. The southern border already has nearly 700 miles of border fencing and barriers built in the last decade. In October, Trump had a gold plaque attached to a two-mile stretch of border fence in Calexico, California, with his name on it to commemorate the first new stretch of Trump’s wall. But the fence was a replacement for an older fence built in the 1990’s. The recently announced 6 miles will be the first new segment of border wall built in a new location by the Trump administration.

U.S. Customs and Border Protection announced the new border wall last Friday — four days before the midterm elections — in a press release. But CBP did not say where the new wall would be located, only that it would be in Hidalgo County, Texas. Several calls and emails to CBP to confirm the location went unreturned.

But Steve Lightfoot, a spokesperson for Texas Parks and Wildlife, confirmed today that Trump’s new segment of border wall would be built through Bentsen-Rio Grande Valley State Park and surrounding areas in Mission, Texas. The park will more than likely close after the wall is constructed, since the land was deeded in a family trust to be expressly used as public parkland. The border wall will also run through national wildlife refuge land and through the nonprofit National Butterfly Center, also in Mission. The center is home to 200 species of butterfly, and serves as critical habitat for the migration of the threatened Monarch butterfly and endangered species including the ocelot and jaguarundi.

Marianna Treviño Wright, director of the center, said that CBP has been deliberately secretive about where new segments of wall will be built because the majority of residents there do not want it. “There’s been no public meetings, no outreach and no effort to reach out to Spanish-speaking residents,” she said. 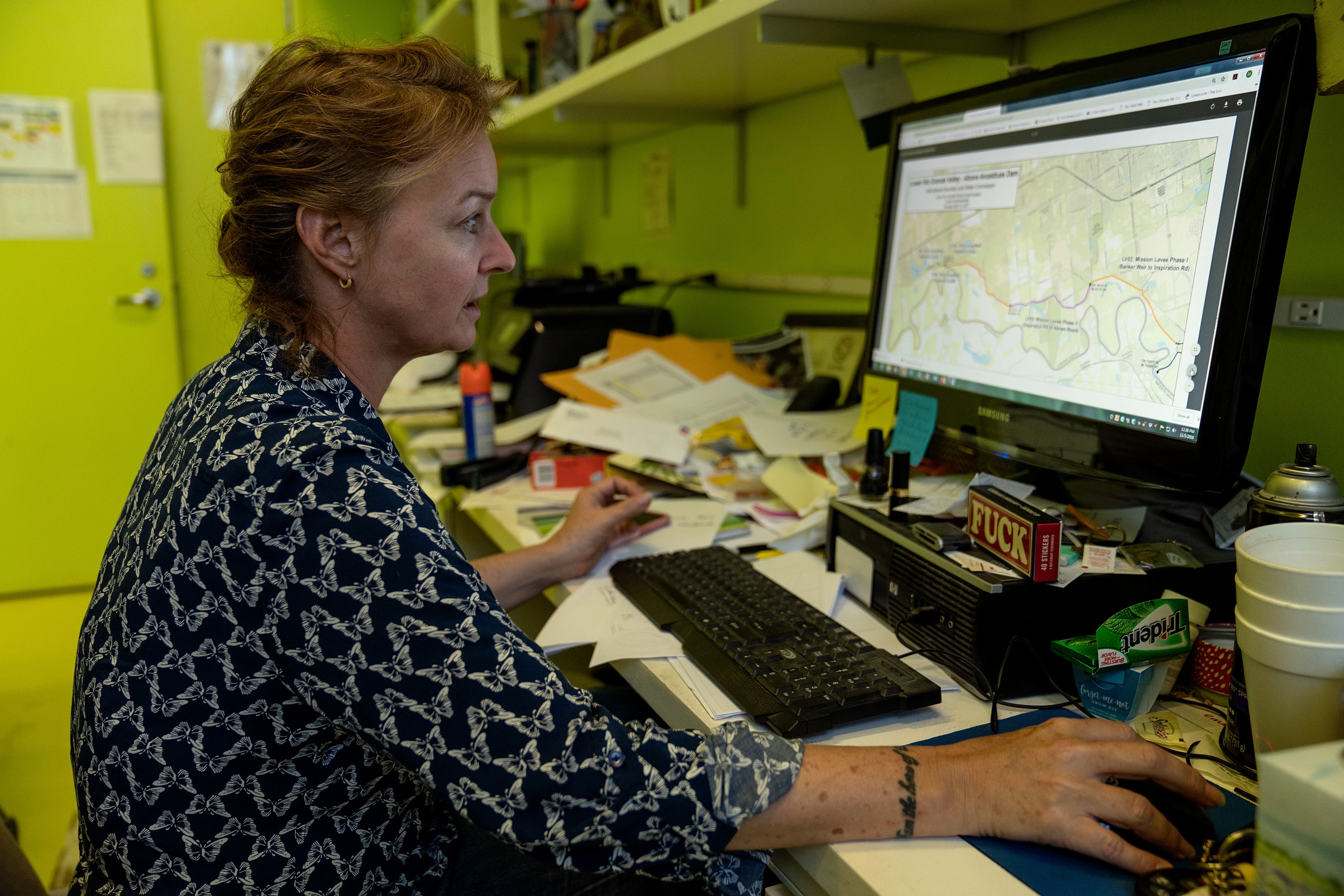 Marianna Treviño Wright, director of the National Butterfly Center, looks over a government map where CBP has said it will build President Trump’s border wall in Texas.

In August 2017, more than 1,000 people walked several miles from the Our Lady of Guadalupe Catholic Church in Mission to the historic La Lomita Chapel — a 120-year-old mission chapel also in the border wall’s path — to protest construction of the wall. This August another protest with several hundred people was held at the National Butterfly Center, which has become the de facto headquarters for border wall resistance in the area.

“I feared that we’d be the first to get the wall,” Treviño Wright said. “The bulldozers could be rolling in here as early as February.” In the summer of 2017, she discovered private contractors with chainsaws destroying critical habitat at the center, to make way for the wall. In December 2017, the center filed suit against the federal government, citing unlawful incursion and deprivation of due process as well as violation of the Endangered Species Act and other federal protection laws.

But under the Secure Fence Act passed in 2006, the Department of Homeland Security can waive hundreds of federal laws to build the wall. And Treviño Wright thinks that the Department of Homeland Security will file a “quick take” condemnation. “Under eminent domain the federal government can literally seize the land and do whatever they like before anything is negotiated or adjudicated,” she said.

Because of the expansive Rio Grande floodplain, the border wall is being built as far as a mile from the river, which serves as the international boundary with Mexico. This means that the wall would bisect the butterfly center, leaving 70 acres between the wall and the river, with the visitor’s center on the north side. It will also more than likely destroy La Lomita Chapel, built in 1899, because CBP also wants to create a 150-foot “enforcement zone” south of the wall, which will include an all weather road, camera towers, and other surveillance.

Father Roy Snipes, a popular Catholic priest who holds services at La Lomita Chapel, has led several protests against the wall. “If they put a wall on the levee, our chapel will be on the other side of it,” he said. Snipes said CBP, which is in charge of the wall construction, has told them very little about its plans for the historic church. “It’s like what you hear out of the White House. Nobody knows anything.”

According to the CBP press release, the new structure will be a “pedestrian, levee wall,” which means that an existing earthen levee that is used for flood control more than a mile from the Rio Grande will be replaced with concrete and topped with a steel bollard wall. Some levee border wall, built nearly a decade ago, already exists in Hidalgo County and ranges from 18 to 30 feet high.

Treviño Wright said CBP has deliberately kept border communities in the dark. And that there’s been a lot of confusion about when and where the border wall will be built. “I’ve heard many landowners in the area say we need to stop Trump’s border wall from being funded,” she said. “They’re not even aware it’s already been funded. And guess what? They’re building it here.”