At some point in the near future, the record-high Mega Millions jackpot is going to make someone very, very rich…. 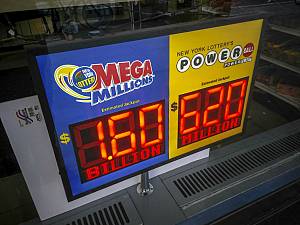 At some point in the near future, the record-high Mega Millions jackpot is going to make someone very, very rich. But as is usually the case when it comes to the lottery, the biggest winner will be the government.

First, a disclaimer: Later today, I fully intend to stop by a convenience store and spend $ 2 on a Mega Millions ticket. The allure of $ 1.6 billion is too much, even if my odds of winning the top prize are just 1 in 302,575,350. I might even buy a Powerball ticket too, because $ 620 million doesn’t sound like a bad payout either.

But before you run out and emulate me, there are a few things us suckers need to keep in mind about the lotto.

First, the majority of lottery revenue goes back to the government. In 2015, The Atlantic estimated that 40 percent of all lottery ticket sales are allocated to state governments. As Steven Greenhut, western region director for the R Street Institute, explained in a 2016 piece for Reason, this “voluntary tax” to support education is supposed to be a positive. But politicians often use lottery revenues to supplant school budgets. As Greenhut put it: “Money is fungible, so the education element mainly is a public-relations ploy to help people feel good about the dollars they spend on tickets.”

Direct ticket sales aren’t the only way the government profits from the lottery system. Say I were the sole winner of the $ 1.6 billion jackpot (lucky me). I could opt to receive either a lump sum payment of about $ 905 million or 30 annual payments averaging about $ 53,333,333 each, according to the Mega Millions website.

Either way, I’d get hit with a 24 percent federal withholding tax. That would subtract nearly $ 13 million from each of my annual payments or $ 217 million from the lump sum. And the top income tax rate is 37 percent, so I’d have to pay the difference between the two rates as well. That would leave me with “just” over $ 570 million, assuming I took the lump sum.

Then there are the state taxes. A total of nine states don’t take a cut of lottery prizes, but the tax rates for the remaining 41 vary. New York’s 8.82 percent tax on lottery winnings—the highest in the country—means my final lump sum payout would be about $ 490 million. The remaining $ 1.11 billion, plus the 40 percent of ticket sales supposedly allocated to education and other causes, would end up in the hands of the federal and New York state governments.

Meanwhile, some states that allow lotteries crush their competition with strict gambling regulations. In Texas, for instance, most forms of gambling are illegal. This means the government has a near-monopoly. The double standard for public and private gambling operations is obvious.

Ultimately, the lottery system is a kind of regressive tax on low-income earners. “If the promised return is by far illusory—and it is—it would be hard to argue that those purchases do not constitute a tax on those who believe the state’s hype,” Fiscal Policy Institute research associate Brent Kramer wrote in 2010, according to MarketWatch.

As Reason‘s Katherine Mangu-Ward noted in a 2012 appearance on NBC, “The people who can afford it the least are the people who are dumping the most money into the lottery.” Poor people, of course, have every right to dream big. But while the lottery promises a chance—albeit a small one—to gain untold riches, it’s always going to be the government that benefits the most.