“This is a war of attrition, but it won’t go on forever,” Abu Osama, a portly, sandy-haired Syrian militant tells the…

“This is a war of attrition, but it won’t go on forever,” Abu Osama, a portly, sandy-haired Syrian militant tells the camera. “We will reach a point where everyone has lost. Do you understand? It can’t go on like this forever.”

Osama offers an all-too-rare perspective: that of an insider in the jihadist movement in Syria, one who has experienced the workings of the most extreme groups firsthand. At one point, Osama is asked to expound on the differences between the two most dominant extremist organizations in Syria, Jabhat al-Nusra and the Islamic State, whose paths diverged. He tells his interlocutor that the difference is “huge.” Explaining with an analogy to parenthood — both the Islamic State and al-Nusra descended from the original Al Qaeda — he asks, “Say you have two children. One is obedient, and the other isn’t. Which child will you prefer?”

Osama is the focus of a new documentary on the war in Syria, titled “Of Fathers and Sons,” by filmmaker Talal Derki. The film focuses on the lives of a group of Syrian militants and their families in a village in the northern province of Idlib. Derki’s previous film, the acclaimed 2013 documentary “Return to Homs,” told the story of a group of youthful revolutionaries waging a doomed battle to liberate their hometown from the Bashar al-Assad regime. While the narrative of “Return to Homs” had an undercurrent of heroism and nobility, “Of Fathers and Sons” is a much darker look at the radicalization of the uprising.

Instead of town squares filled with jubilant revolutionary demonstrators, the setting of this film is an otherworldly rural apocalypse. Osama and his eight children call it home. Aside from some young schoolgirls, no women are seen. Osama’s two wives are hidden from view, though he periodically berates them while they are off-camera. His sons play and fight amid a bleak landscape of rural poverty and decay. In the distance, a horizon of destroyed buildings silently looms over them, an eerie reminder of the dreadful impact of the Syrian war. A committed extremist, hardened by years spent in government prisons, Osama openly reminisces on camera about his joy upon hearing of the 9/11 attacks. As he proudly explains, his two eldest sons, 13-year-old Osama and 12-year-old Ayman, were both named after the top leaders of Al Qaeda. 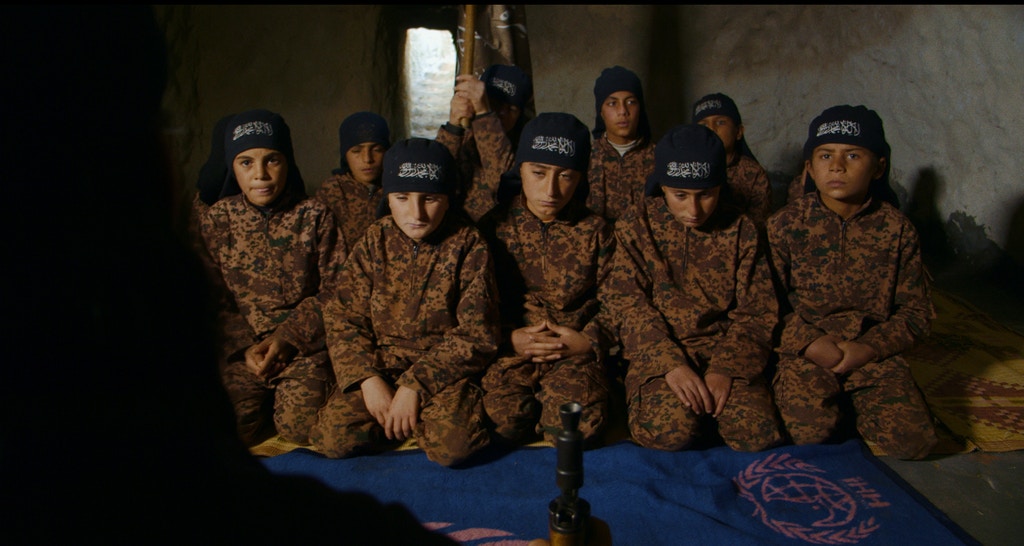 During their time together, Osama introduces Derki to more of his fellow travelers in the movement. These men express a visceral hatred toward the West, but also toward the mainstream Syrian opposition — whom they deride as “pigs.” While most of the world has been horrified by the impact of the war on Syrian society, for the extremists, some of the changes have been quite welcome. One middle-aged fighter with a black beard and deeply lined face tells Derki that prior to the war, most of the residents of his village had been adherents of Sufism, the spiritual branch of Islam that has historically predominated in Syria and much of the Muslim world. The jihadis view Sufis as heretics. Thanks to the violence and exodus wrought by the conflict, things have changed. “The whole village was Sufi, other than a few exceptions,” the man tells Derki, a faint smile breaking across his lips. “Now there are no more Sufis, thank God.”

The film also paints a picture of ignorance, boredom, and violence amid the ruins of a destroyed country. While Osama periodically goes out on missions to defuse mines or snipe at regime soldiers with his rifle, his children are seemingly left to their own devices. They swim and play amid the wreckage of their sparsely populated village. These antics are occasionally punctuated by acts of cruelty and violence that the boys commit against one another. They mimic their fathers by building crude bombs out of citric acid and yelling at little girls in the village to cover themselves and stay indoors.

Groups like the Islamic State and Al Qaeda often make grandiose claims, in their magazines and videos, to be raising the “next generation” of holy warriors. But for all the lofty invocations of ancient texts and medieval gallantry made by these groups in their propaganda, Osama and his associates come across as simply crude and thuggish. Despite a small collection of books that he jealously protects, neither Osama nor the other militants in the film evince much intellectual sophistication or foresight. In one scene, another militant explains to a visibly bemused Derki that he rejects the creation of a political state, such as the one demanded by the mainstream Syrian opposition, demanding instead a “fair Islamic caliphate, where everyone is treated fairly.” The man offers no further elaboration on what this vague utopian project would actually entail or what it would require to succeed. Later on, an Al Qaeda trainer informs his young cadre that they have an Islamic duty to follow the extremist group, simply because, as he explains, “It’s the oldest group, it’s based on clear religious concepts, and it’s stronger.” 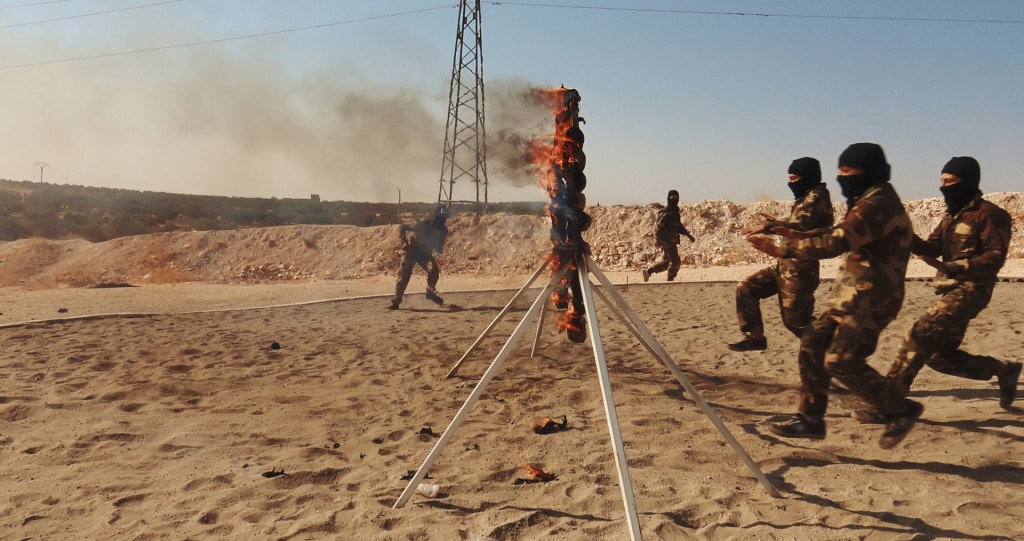 The trajectory of Osama and his comrades’ movement is not altogether surprising. In his 2015 memoir, co-published with former Australian counterterrorism-official-turned-academic Leah Farrall, “The Arabs at War in Afghanistan,” the former Egyptian Islamist Mustafa Hamid, also known as Abu Walid al-Masri, lamented the authoritarianism and ignorance of contemporary jihadist groups. Hamid wrote that such groups “contented themselves with shouting Islamic slogans and making threats of violence and intimidation.” Hamid added, “They relied on the people responding to these religious slogans and forgetting their needs and the misery of their life as their conditions deteriorated.” Osama fits well into Hamid’s description of the vicious and short-sighted nature of modern extremist groups. Fixated narrowly on violence and power, they show little inclination to think critically about their methods or goals. Trapped in a war with a brutal government, they have wound up emulating its worst behaviors: treating captives in their makeshift prisons cruelly and ideologically brainwashing young recruits.

In one of the most haunting segments of “Of Fathers and Sons,” Osama, after being wounded by a mine, gives his eldest son over to Al Qaeda to be trained along with a group of other young boys. The boys are given masks and camouflage uniforms, and are screamed at and slapped by their instructors. They are taught the rudiments of handling deadly weapons. Made to march in unison through the desolate streets of their villages, the boys undergo a program of ideological indoctrination according to the organization’s tenets. The terrifying image that becomes apparent is of the transformation of a group of curious, young boys into cold-eyed killers — a dynamic reminiscent of the training of child soldiers in Sierra Leone, or even the grooming of young children by Baltimore street gangs famously illustrated in the HBO series “The Wire.”

With Syria’s mainstream opposition marginalized over the past several years of conflict, many Syrians have found themselves caught between the hammer and anvil of the extremists and the Assad regime. Faced with this hopeless situation, some have chosen to reconcile themselves once more to life under Assad’s dictatorship. Millions more have fled the country entirely, choosing to try their luck as refugees in Turkey, Lebanon, and Western Europe. Toward the conclusion of “Of Fathers and Sons,” Derki paints an apocalyptic image of a destroyed country and society, its traditional values twisted by years of unrelenting violence and social decay. In a rare moment of reflection, even the hardened Osama confesses his own evident dissatisfaction with his fate and with the undeniable catastrophe that has befallen his homeland.

“How does a man feel to see his country destroyed in front of his eyes?” he asks, in apparent resignation. “What can we do? But we won’t lose hope, God willing.”