On April 19 and 20, 1914, during a miner strike in Colorado, the National Guard killed dozens of people—though the… 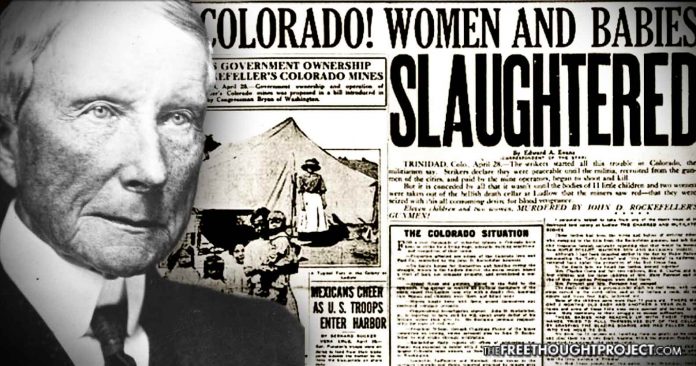 On April 19 and 20, 1914, during a miner strike in Colorado, the National Guard killed dozens of people—though the exact number of casualties is disputed, most sources agree that at least four women and 11 children were among the dead. When the workers first went on strike, they were evicted from the company-owned houses in the mining town, so they set up massive tent colonies outside of the towns. The workers were protesting for higher wages and better work qualities but were making very little progress.

The largest of these tent cities was in Ludlow, just outside of John D. Rockefeller’s Colorado Fuel and Iron Company. The tent city in Ludlow housed over 1,200 people, and entire families, including children, were living in these tents. The strike had been going on for months before the massacre, with tensions rising between the military and the strikers with every passing day.

Then one day, these tensions came to a head and the National Guard set up a machine gun on a hill overlooking the tent city and began raining bullets down on the workers and their families. The Soldiers then invaded the colony and began setting fires to the tents, trapping many innocent people to die inside. When news of the violence spread, miners all over the state began to revolt, and went to war with the coal companies, shooting and attacking soldiers and mine owners, as well as dismantling railroad tracks and blowing mines shut.

Eventually, the Army was called in to quell the uprising and the protesters went back home or back to work.

However, news of the incident was beginning to spread, tarnishing the Rockefellers’ reputation and inspiring more protests. To deal with this problem of public perception, Rockefeller hired public relations pioneer Ivy Lee. Lee was an early influence of Edward Bernays, who would later write the infamous book “Propaganda,” a textbook of mind control for tyrants and aristocrats. Bernays is often called the “father of propaganda.” If this is so, then Ivy Lee is the grandfather.

It is likely that Rockefeller picked Lee for the job because years earlier he came up with an idea that would revolutionize how corporations and governments communicated with the peasant class. In 1906, when a horrible train accident happened in Atlantic City, Lee suggested that the company issued a statement presenting their side of the story to the press—this was to be the first “press release.”

The disaster was caused by negligence on the part of the railroad company and was witnessed by hundreds of people, so the press release was a special measure taken in hopes to get their side of the story out first. The press release scheme was a success and two days later the New York Times just printed the company’s statement word for word! This kind of insanity continues to this day where “news“ reporters simply regurgitate the statement from the White House or from Exxon about what they are doing, instead of making any attempt at investigative journalism.

Starting with the Ludlow Massacre, Lee began to change the public image of the Rockefeller family and their businesses even if it meant telling blatant lies. Lee sent out mass bulletins claiming that the people who had been killed in the Colorado protests were the victims of a house fire caused by an “overturned stove,” when in reality those fires were intentionally set by National Guard soldiers. He also accused a popular union worker named “Mother Jones” of being a prostitute and running a brothel, because she was a vocal activist who was bringing a national spotlight on the incident.

On Lee’s advice, Rockefeller wrote a statement one month after the incident, insisting that, “There was no Ludlow massacre. The engagement started as a desperate fight for life by two small squads of militia against the entire tent colony … There were no women or children shot by the authorities of the State or representatives of the operators … While this loss of life is profound and to be regretted, it is unjust in the extreme to lay it at the door of the defenders of law and property, who were in no slightest way responsible for it”

For a short time, Lee and the Rockefellers were able to manage public perception of the event on a national level, although many residents of Colorado were already well-aware of the truth behind the massacre. Eventually, word spread and caused outrage across the country, sparking widespread protests that eventually led to a congressional hearing. As expected, the congressional hearing solved nothing and brought no justice for the families of the slain children and miners.

To repair the public image of the Rockefeller name, Lee suggested that the family make high profile donations to various charities and have photographs taken of them handing out money to the commoners to make people think that they were good-hearted and generous.

Again the plan worked and the application of public relations was able to resurrect Rockefeller’s reputation and then build it to the point where it is today. At the time of his death, Lee was being investigated by Congress for his work with the Nazis through the company IG Farben and a proxy firm called the German Dye Trust. He was also a founding member of the Council on Foreign Relations.

The Ludlow massacre is a part of history that is often glossed over, and when it is mentioned, it is typically in the backdrop of conversations about unions and labor laws. While it is true that this was a labor dispute and a strike, the power dynamic that existed between the workers, the company and the government is often overlooked.

It is often suggested that government is here to protect people from corporations becoming too powerful, but this incident illustrates how the government actually helps these interests maintain their power.