Synagogue members console one another outside of the Chabad of Poway Synagogue in Poway, Calif., after a shooting on April… 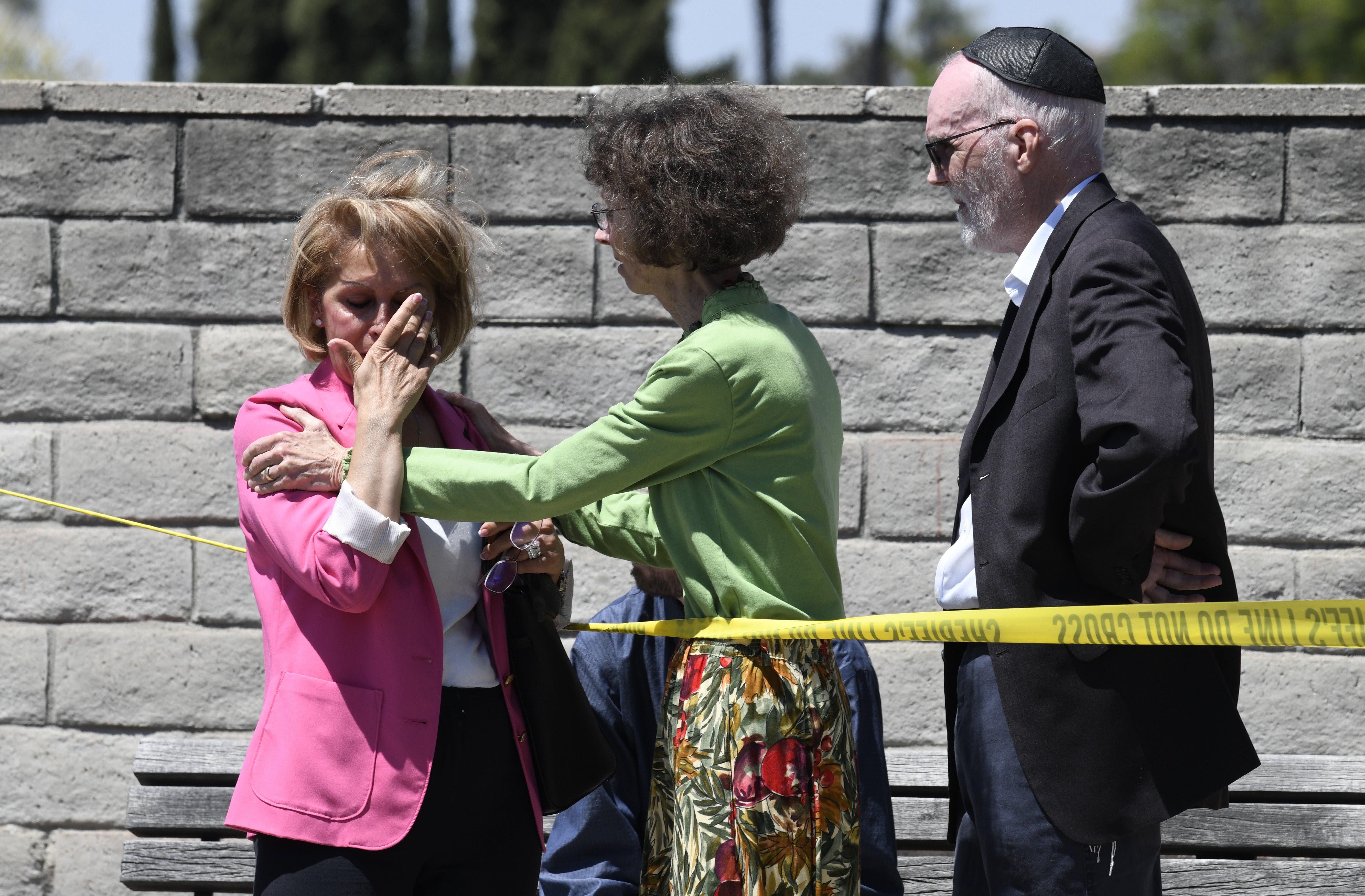 Synagogue members console one another outside of the Chabad of Poway Synagogue in Poway, Calif., after a shooting on April 27, 2019.

Two weeks before a man walked into a Poway, California, synagogue and shot four people, killing one, an arsonist tried to burn down a nearby mosque. The same man likely committed both crimes. In a 4,000-word manifesto reportedly posted online by the synagogue shooter, a 19-year old San Diego man named John Earnest who was taken into custody on suspicion of committing the synagogue killing, claimed responsibility for the mosque arson in the nearby town of Escondido. He had done the arson in honor, he said, of the mass murderer who had recently killed 50 Muslim worshippers in New Zealand. “I scorched a mosque in Escondido with gasoline a week after Brenton Tarrant’s sacrifice and they never found shit on me,” he wrote in his manifesto.

The connection between these two crimes screams at us to pay attention.

Earnest’s manifesto is a stomach-churning blend of anti-Semitism and Islamophobia, with justifications for violence liberally mixed in. He leaves no ambiguity about who inspired him.

In the past six months there have been three mass shootings at houses of worship in Western countries — two targeting Jews and one targeting Muslims. In each case the ideology has been the same. The shooters were driven not just by white supremacy, but by a bigoted conspiracy claiming whites are being demographically “replaced” by ethnic minorities. Earnest’s manifesto is a stomach-churning blend of anti-Semitism and Islamophobia, with justifications for violence liberally mixed in. He leaves no ambiguity about who inspired him. “Tarrant was a catalyst for me personally,” he wrote, referring to the New Zealand mosque shooter who left behind a similar manifesto. “He showed me that it could be done.”

For the past several decades, Jews and Muslims living in the West have had the relative luxury of being able to fight with each other over foreign policy to the near exclusion of any other issue. Those were the halcyon days. Little did we realize that, while we clashed, the ground was slowly giving way under our feet. As my colleague Mehdi Hasan and British journalist Jonathan Freedland have written, both minority groups are today threatened by the emergence of far-right movements utterly hostile to diversity. If these movements reach critical mass, the outcome of old debates will be moot. History has already shown us where this road leads.

It’s hard to recognize a Golden Age until it’s passed. While there is no shortage of injustices and challenges facing the United States and Europe today, they remain places where people of different races and religions are able to live together with a relative degree of peace and dignity. At their best, they have allowed different peoples, like Jews and Muslims, to mix, get to know each other, and even create unique cultures and communities. This kind of diversity is not the historical norm. And today, it is under grave threat. Each mass shooting — carried out by those who have proven they are willing to live up to their toxic rhetoric — is another blow against the open societies most of us take for granted, societies that are beginning to crumble.

The horrible shooting of Jewish worshippers at synagogue on the last day of Passover reminded me of the pain I felt following recent far-right massacres of Muslim worshippers at mosques in Quebec City and New Zealand. The choice of targets in each case was different, but the ultimate goals were the same. The fact is that anti-Semitism and Islamophobia in the West flow from one source: the quest for ethnic purity. Those who accept one bigotry while thinking they will be safe from the other are living a delusion.

Today, we are reaping the consequences of hatred that has been sown — is still being sown — by powerful demagogues and opportunists. Things are likely to get worse before they get better.

In the aftermath of horrible events like the synagogue shooting in Poway, I’m reminded of my favorite writer, the Jewish-Austrian novelist Stefan Zweig. He was a leading figure in the cultural renaissance of Jewish Vienna, before the rise of Nazism turned the world dark for him. We should keep Zweig’s story, and his destroyed community, in mind during dark moments like these — not as a sign of what is inevitable, but as reminder of the urgent need to resist these familiar forces with dignity and strength. The lesson rings especially true in the wake of tragedies like the ones in New Zealand, Pittsburgh, Quebec City, and Poway.

“Even from the abyss of horror in which we try to feel our way today, half-blind, our hearts distraught and shattered,” Zweig wrote in his memoirs, “I look up again and again to the ancient constellations that shone on my childhood, comforting myself with the inherited confidence that, some day, this relapse will appear only an interval in the eternal rhythm of progress onward and upward.”

Journalism’s New Propaganda Tool: Using “Confirmed” to Mean its Opposite