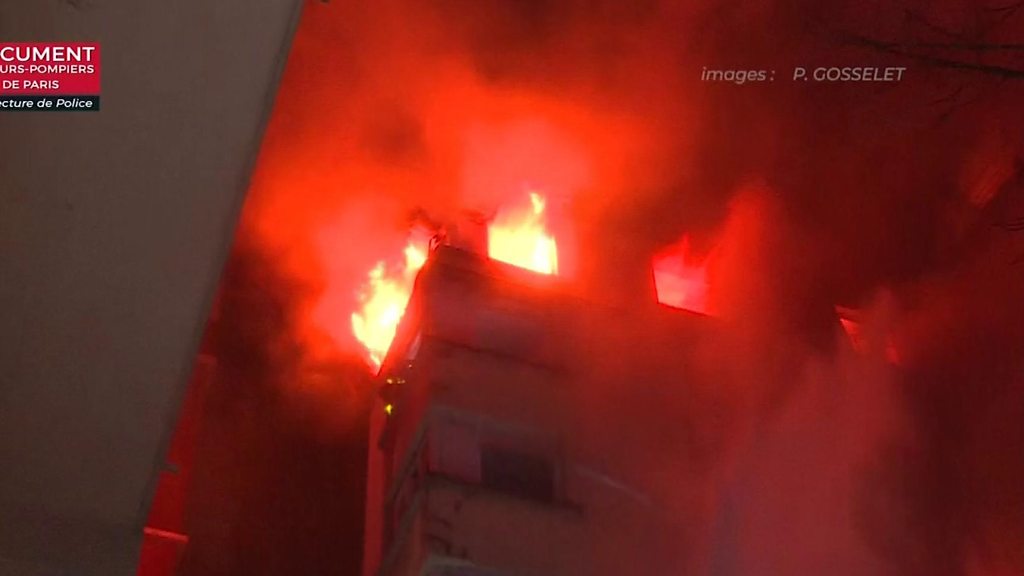 Ten people including a baby have died in a fire at an eight-storey building in south-western Paris, fire service officials say.

More than 30 people – including six firefighters – were injured. One person is in a serious condition.

Fifty people were evacuated by ladders from the blaze in the upmarket 16th arrondissement.

The Paris prosecutor says it may have been deliberately started. Police have detained a female suspect.

French President Emmanuel Macron said that the country “had woken up to tragedy“, and praised the fire services for their courage.

How did people escape?

The fire started on the second floor and spread across the 1970s building on Erlanger street shortly after 01:00 (00:00 GMT), forcing some residents to scramble on to nearby rooftops to escape the flames and smoke.

An eyewitness at the scene told France Télévision:

“The fire alarm went off at 00:30, a little after midnight, and smoke was everywhere already. I live on the eighth floor, the top floor, so I tried to pass from balcony to balcony to get away, And then we huddled up in a corner. Other people climbed up to where I was to escape the flames.”

About 250 firefighters were deployed to the scene, not far from the Bois de Boulogne park, helping to rescue those trapped on the roofs. Pictures showed flames coming from the top floor windows and firefighters in breathing apparatus scaling ladders to reach residents.

“When we arrived, we were faced with an apocalyptic situation. Lots of people were calling for help from the windows”, the spokesman said.

Six firefighters are among the injured, reports French broadcaster BFMTV.

The fire was brought under control after a five-hour operation, but the death toll could still increase, a fire service spokesman told the AFP news agency.

Firefighters said the building’s courtyard acted as a funnel, helping the flames to spread from the lower to the upper floors.

Surrounding buildings in the area have been evacuated as a precaution. Town hall officials have been tasked with finding alternative accommodation.

What do we know of the suspect?

An investigation has been opened into the criminal charge of causing death by arson, AFP reports.

French media say the woman is suspected of trying to set fire to a car parked near the building after a row with a neighbour.

Paris Mayor Anne Hidalgo has sent her condolences to the victims, and is on her way to the site, along with Interior Minister Christophe Castaner.

Just a few weeks earlier, four people were killed after a huge blast at a bakery in the centre of the city.

At the scene of the tragedy

This is a well-to-do apartment building in an affluent neighbourhood. Other recent, deadly fires in Paris have been in poor, overcrowded areas where safety norms have clearly being ignored.

By mid-morning the fire had been extinguished and normal life was resuming. Sounds of children playing came from a schoolyard next door.

The building is on an inner courtyard, so from outside there was no sign at all of the anguish and the drama.

But groups of people were milling about, residents from neighbouring buildings who have been told to leave their homes. They wanted to know when they could go back.

The occasional witness arrived who saw it all: the screaming, the flames, the people on seventh-floor window ledges staring into the void.

They said they wouldn’t ever forget.

Are you in the area? If it is safe to do so please email haveyoursay@bbc.co.uk