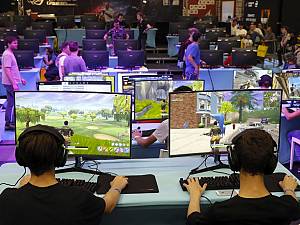 Say that I told you that a state lawmaker wanted to tax a particular product that he found objectionable and then use that money to fund school-related projects. When asked about it by the press, he would openly acknowledge that part of the purpose of the tax was to serve as a new source of revenue for the state. Which political party would you assume this lawmaker belonged to?

If you assumed he’s a Democrat, you are so very, very wrong. It’s actually Republican Pennsylvania state Rep. Christopher Quinn who wants to add a 10 percent sales tax on a particular retail good, “violent video games.” Quinn wants to apply a special tax on games with “adults only” ratings that may include “scenes of intense violence, graphic sexual content, or gambling with real currency,” according to the text of HB 109.

This money would be collected by the state and then set aside in a special fund—The Digital Protection for School Safety Account—which will be distributed to schools to enhance school safety.

To be blunt, Quinn is trying to make video games the villain of school shootings in order to justify a new tax. From NBC10 in Philadelphia:

Quinn told NBC10 this is not about censorship but rather about finding a new revenue stream. He did however note that “many have concluded that violent video games are a risk factor for potential violence.”

“This bill does not prohibit violent video games, instead it simply provides a revenue stream—it tries to recoup some of the societal costs—to help make our schools safer by taxing an industry that has been shown to lead to violence,” he said.

“Shown to lead to violence” is complete and utter crap. As video games have become more and more popular, violent crimes have been going down, not up.

Second, his memo announcing his plans references a single paragraph from a single article from the National Center for Health Research, and that article points to an American Psychological Association analysis that found that video games might increase aggression. But that same study clearly states they have not been able to find any link between violent video game play and “delinquency or criminal behavior.”

A recently released study from researchers from the University of Oxford examined the behavior of 1,000 gaming teens and found no link at all between violent games and aggressive behavior.

Laying the blame on video games is just a useful crutch anyway. By bringing up “revenue,” Quinn made it abundantly clear that his real goal is to find a way for the state to get its hands on more taxpayer dollars in order to bankroll pet projects. After all, video games are very popular—the industry raked in about $ 135 billion in 2018.

He may run into a significant barrier known as the First Amendment. He’s attempting to levy a tax on a game on the basis of its content. In 2011, the Supreme Court ruled that video games are protected by the First Amendment and struck down a California law that banned the sale of violent video games to minors. The Entertainment Software Association (which represents game companies) warns that Quinn’s tax would be unconstitutional.

That may be why Quinn’s bill has already failed once, but just like a gamer struggling to hack and slash through Dark Souls, he doesn’t appear to be giving up. More on the fake “consensus” that violent video games led to aggression in teens, by Reason’s Ron Bailey, here.