Well, another season of Timeless has ended with a bang. Some predictable twists, some less so. As always, these writeups… 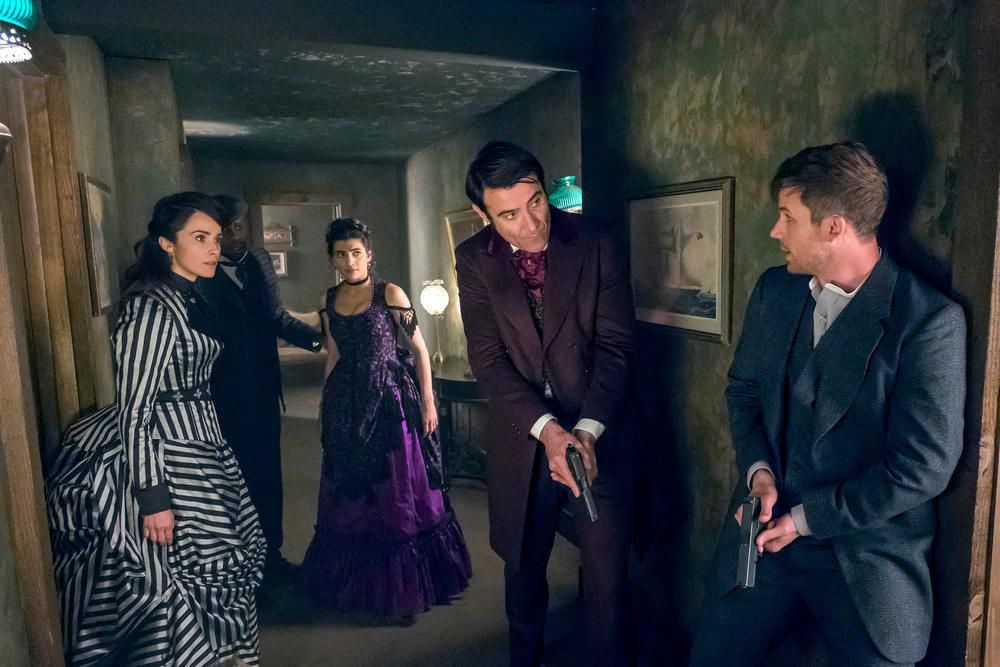 Well, another season of Timeless has ended with a bang. Some predictable twists, some less so. As always, these writeups contain not just history but major plot spoilers, so read with caution.

The last two episodes of the season take us to Civil War-era South Carolina and San Francisco’s Chinatown, circa 1888. As they aired together, we’ll tackle them together.

First, South Carolina, June 1, 1863. In real history, this is the day that a ragtag group of soldiers pull off one of the most audacious operations of the entire war: sail gunboats into the heart of enemy territory, burn Southern plantations, and rescue all the enslaved people. Their leader? Harriet Tubman.

Born into slavery, Tubman suffered under various cruel masters. She escaped to Pennsylvania, and freedom, in 1849, at about age 27 (her birth year is contested), then returned to Maryland to rescue her family on the Underground Railroad. She would ultimately make 19 trips into slaveholding states to rescue enslaved people; conservative accounts say she rescued 70 people, other accounts say up to 300. When the Civil War broke out, she worked for the Union as a cook, nurse and spy.

Which brings us to June 1, 1863. On this night and into the pre-dawn hours of the following day, Tubman, under the command of Union Colonel James Montgomery, took between 150 and 300 black Union soldiers (the 2nd South Carolina Volunteer Infantry (African Descent)) up the Combahee River. The river was filled with mines, but Tubman had gathered intel on where they were. Three ships traveled up the river under cover of darkness. By dawn, they had reached the first plantation. Enslaved families ran for the boats, and the soldiers burned everything else.

As the podcast UnCivil reports, the Union freed 700 enslaved people that night. Most of the men of fighting age immediately enlisted in the Union Army.

This is one of those arresting stories that really ought to be taught in history class. (In a nod to the unfortunate relative obscurity of this story, even Lucy needs a refresher, provided by Rufus) In “Timeless,” which gets the story mostly right, the mission seems fated for failure because Emma (BOO! HISS!) has given the Rittenhouse sleeper, a fictional Confederate colonel, a modern-day military history of the Civil War that gives him a roadmap to victory, including exactly where Montgomery’s Union troops are camping out. The Rebs massacre members of the 2nd South Carolina, Montgomery flees, and the raid looks to be doomed before it even started.

The Time Team meets up with Tubman, who insists on raiding the plantations, troops or no troops; Rufus is starstruck. Lucy, realizing that the raid will be a disaster for the Union without the extra manpower, goes with Flynn to convince Montgomery to return. Meanwhile, Rufus and Wyatt go incognito at a nearby plantation to find the sleeper and destroy the Confederate version of Gray’s Sports Almanac. Spoiler, they do both.

Then—at the end of episode nine—a twist: Jessica is a Rittenhouse agent. Curse your sudden but inevitable betrayal! She swipes Wyatt’s gun, forces Jiya into the Lifeboat and vanishes just in time for Wyatt to realize what an incredible idiot he’s been. Whoops.

The season finale picks up where we left off. A slightly sedated Jiya escapes Rittenhouse HQ thanks to some fancy fighting (where’d you learn that, Jiya?) and zooms off in the Lifeboat with Jessica shooting behind her. Still drugged and piloting a Lifeboat damaged by one of Jessica’s bullets, Jiya’s unable to bring the time machine back to the bunker. Instead, she has jumped in time and space. But Where? And When? Knowing that Jiya will try to change the historical record to communicate with the present, Lucy hits the stacks and finds a photo of Jiya in San Francisco’s Chinatown, circa 1888. There’s also a message in the photo (written in Klingon, natch): GPS coordinates to where the Lifeboat has been hidden and two words: “DON’T COME.”

Of course the team ignores the message. After they’ve fixed up the Lifeboat, which has been hiding under some bushes since Jiya hid it there 130 years ago, they immediately jump to late-19th century San Francisco and soon find her.

She’s spent the last three years working in a seedy saloon and refuses to leave, explaining that her vision shows Rufus dying if and when she attempts to go back to the future. (The gold rush miners filling the bar here aren’t exactly cowboys, per her doomsday vision, but they do all have bad teeth and spurs on their boots, so close enough.) Finally convinced to return after Lucy speechifies about friendship and family, events play out almost exactly as Jiya foresaw them. Acting quickly, Jiya prevents her vision—of a Rittenhouse sleeper stabbing Rufus in the back—from coming true, but she can’t, tragically, save him from what’s hiding across the street, Emma’s gun.

The Time Team returns down a man, with everyone shocked in disbelief. This would be a depressing note to end on; the “rules” of time travel say that the team can never go back to a place they already were, and it’d take too long to train a new pilot to mount a rescue mission. But just as all hope is lost, what appears but another version of the Lifeboat. Out step older, more badass versions of Wyatt and Lucy. Just before the show closes, Lucy says to a stunned audience (and probably a not-insignificant number of gleeful #Lyatt shippers): “You guys wanna get Rufus back, or what?”

That’s it for our writeups for now, unless NBC decides to renew this fan-favorite show for a third season. But we’re not quite done yet. Look out for our Q&A with co-creator Shawn Ryan to publish tomorrow.

How a Gay Teen, an Internet Nazi, and a Late-Night Rendezvous Turned to Tragedy

People in Prison Are Way More Likely to Have Dyslexia. The Justice System Sets Them Up to Fail.

The Government Can Make You Legally “Dead,” Even When You’re Very Much Alive

Amy Klobuchar Was Asked About Eric Garner at the NAACP Forum. Her Answer Did Not Go Over Well.

The Trump Administration Announced It’s Bringing Back the Federal Death Penalty. Is It That Simple?

For Hundreds of Years, Papier-Mâché Has Lent a Surreal Face to Catalan Culture

A Radical Approach to Helping Former Prisoners Start Over: Let Them Into Your Home

California Tried to Fix Its Prisons. Now Its County Jails Are More Deadly.