Spread the love Orlando, FL — If you are a parent of a child within the Florida school system, you… 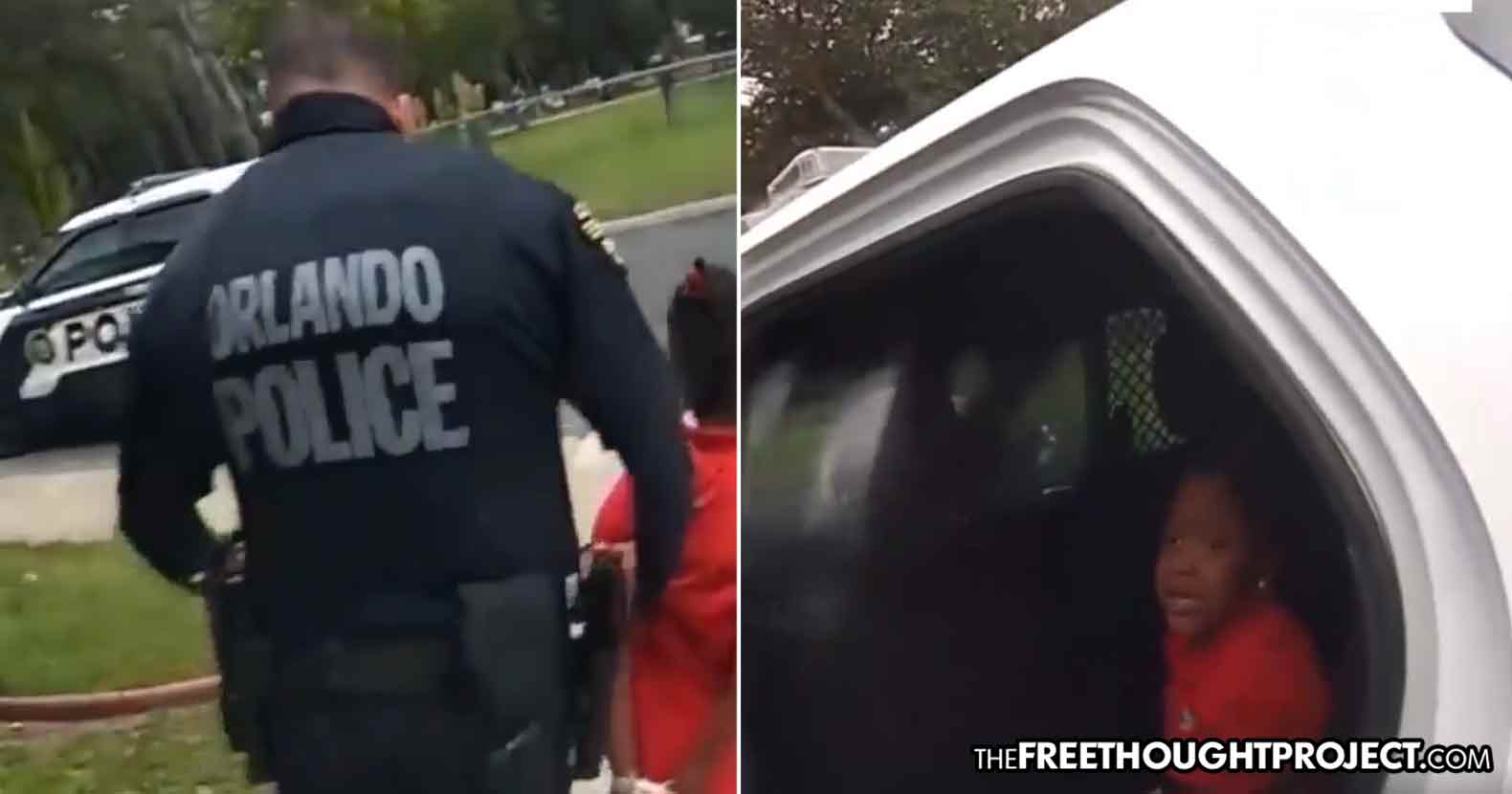 Orlando, FL — If you are a parent of a child within the Florida school system, you would do well to scroll through our archives to see the potential danger your children face every day. The police state in Florida has become notorious over the years for beating children, cowering as children are killed, and using heavy handed tactics on little girls as young as 6-years-old.

In the land of the free, throwing a temper tantrum can be considered a crime, even for 6-year-old little girls. As TFTP reported last year, a Florida grandmother learned that the hard way after her granddaughter was arrested for doing that very thing at school.

For months, Orlando Police Department officials refused the public records request to release the body camera video showing Kaia Rolle’s arrest at Lucious and Emma Nixon Academy on Sept. 19, 2019, citing student privacy issues. However, the family’s attorney was given a copy and shared it with local news outlets, according to Click Orlando.

Meralyn Kirkland explained to WKMG that her granddaughter had been arrested at the charter school by Orlando Police Officer Dennis Turner.

“What do you mean she was arrested, he said ‘there was an incident and she kicked somebody and she is being charged and she is on her way,’” Kirkland explained.

This tiny little girl was handcuffed and hauled off to the juvenile detention center where she was booked into the jail. She was fingerprinted and even had her mugshot taken. Exactly how anyone involved this process thought this was acceptable is a mystery.

Officer Turner was fired immediately after arresting the child and all of Rolle’s charges were dropped and her record expunged. However, that did not reverse the horrifyingly traumatic experience this little girl underwent at the hands of the Florida police state.

When police told Kirkland that her granddaughter had been arrested, Krikland tried to explain that little Kaia has a medical condition, but police did not care.

After being booked into the system, Kaia was charged with battery and Kirkland was told she could come pick up her daughter.

“They told us we had to wait a few minutes because Kaia was being fingerprinted, and when she said finger printed it hit me like a ton of bricks,” Kirkland said. “No six year old child should be able to tell somebody that they had handcuffs on them and they were riding in the back of a police car and taken to a juvenile center to be fingerprinted, mug shot”

According to Click Orlando, Turner wrote in Kaia’s arrest report that Beverly Stoute, whom he identified as an assistant principal, was the victim in the case and she wanted to press charges because Kaia kicked her on the legs and punched her arms several times.

However, school staff later wrote in an official report that no one at the school ever wanted to press charges. And, as the body camera footage shows, officials are actually questioning why this officer was kidnapping a little girl.

Showing how unnecessary this arrest was, as the video begins, a staff member is reading a book to Kaia as she is sitting down in the office.

“Stand up,” Turner tells the girl.

“What are those for?” Kaia said, beginning to cry and looking down at the zip ties the officer held in his hands to restrain this tiny child.

The disturbing video shows the girl shaking and crying as she is being restrained and kidnapped by two massive officers.

But they didn’t let her go.

Clearly in shock that a little girl was being arrested officials were seen on video asking Turner where exactly he is bring her.

He responded by telling them that she is going to the juvenile detention center.

“The restraints, are they necessary?” an employee said in a likely rhetorical question.

“If she were bigger she’d be wearing regular handcuffs,” Turner replies, adding he previously arrested a 7-year-old.

In some sort of sadistic bragging episode, Turner then tells officials that Kaia “now has broken the record” as the youngest person he’s arrested.

After news of the incident broke, it would then be revealed that officer Turner arrested an 8-year-old child the same week at school and no one said anything to challenge him. Later that day, he would arrest yet another 6-year-old.

Naturally, the nation reacted in public outcry after news of the incident broke, prompting a response from officials.

“On behalf of myself and the entire Orlando Police Department, I apologize to the children involved and their families,” Orlando police Chief Orlando Rolon said on Sept 25. “As a grandfather of three children less than 11 years old, I can only imagine how traumatic this was for everyone involved.”

According to the Orlando Sentinel, officers arresting children under 12 must receive approval from a Watch Commander, which is department policy. Turner failed to do this both times.

What’s more, officer Turner’s past is less than stellar, yet he was still hired on to work around small children. We are now seeing the inevitable result of such disturbingly lax hiring practices.

In 1998, Turner was charged with child abuse. He was suspended pending the outcome of the investigation, the Sentinel reported. In that case, Turner was arrested after his 7-year-old son showed up at school with visible injuries from the abuse. Exactly what happened after the arrest remains unclear.

In 2016, he was reprimanded for using excessive force after stunning a man five times with a Taser during an arrest, the newspaper reported.

The NY Times spoke with Dr. Victor M. Fornari, the vice chairman for child and adolescent psychiatry at Northwell Health’s Zucker Hillside Hospital in Glen Oaks, N.Y., who said justifying the arrest of children as young as 6 and 8 is ridiculous.

The mental health system — not the criminal justice system — is the one commonly relied on in a situation like this, he said, according to the Times.

“Arresting them and putting them under handcuffs is traumatizing,” he said. “There’s no clinical benefit to the child or society.”

the 6-year-old girl asked the Orlando police officers. “They’re for you,” Officer Dennis Turner said about the zip ties, before another officer tightened them around her wrists. … she wailed in body camera footage from the arrest, which Kaia’s family shared on Monday eveninghttps://www.clickorlando.com/news/local/2020/02/24/please-let-me-go-video-shows-6-year-old-girl-crying-pleading-during-arrest-at-orlando-school/