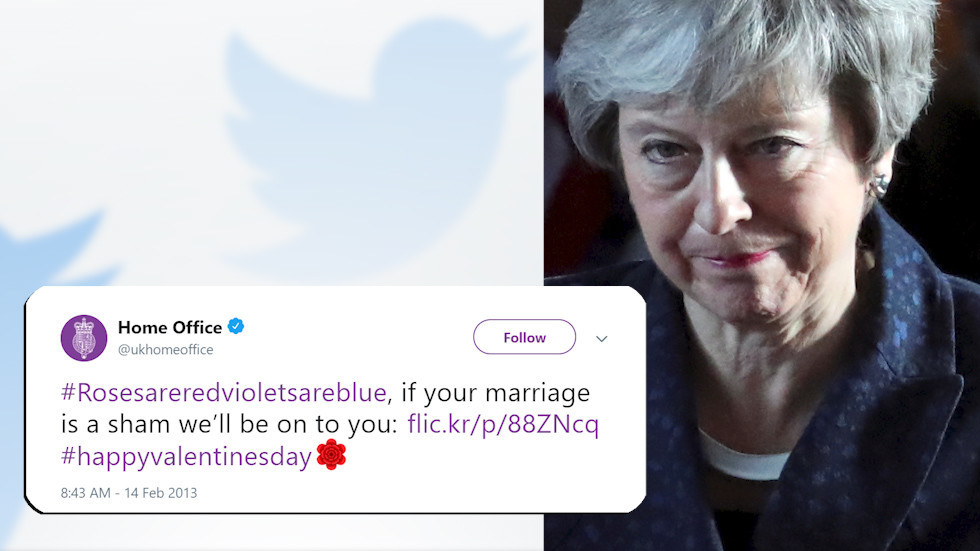 A somewhat threatening Home Office tweet from 2013 has resurfaced right as former home secretary and current Prime Minister Theresa May faces the prospect of a Valentine’s Day massacre in parliament.

As the British government is set to debate yet another iteration of May’s draft Brexit deal, which many expect to be defeated, online commentators saw fit to mark the occasion by dredging up a tweet from the PM’s time as home secretary back in 2013.

As the government struggles to craft a deal, much to the chagrin of the public, wistful mockery has become a favorite British pastime. The latest reaction to the six-year-old tweet even had many trying their hand at poetry to add a bit of creative flair to proceedings.

Jamgate and Brexit featured heavily in the verbose takedowns of the embattled British leader.

Passports are red
But soon they’ll be blue.
If you think that that’s progress,
You must be on glue.

Violets are blue
Roses are red
We squeeze the poor
And leave them for dead.

Violets are blue
Roses are red
Get the body bags for Brexit as soon we'll be dead.

Roses are red
Violets are blue
All Theresa May touches
Turns into poo.