Tallahassee, FL — Proving police are more interested in making high-profile arrests of cannabis users than they are in going… 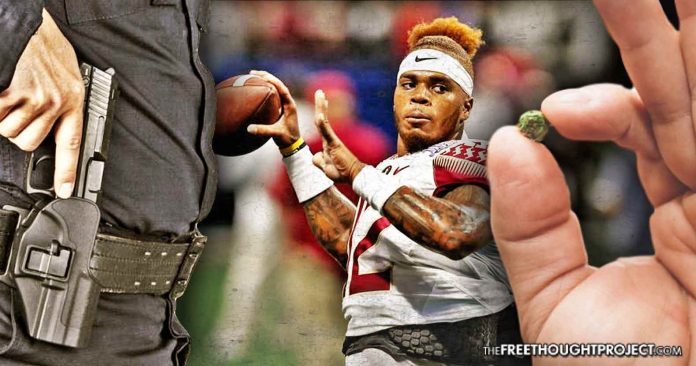 Tallahassee, FL — Proving police are more interested in making high-profile arrests of cannabis users than they are in going after more serious unsolved crimes, authorities raided Florida State University quarterback Deondre Francois’ apartment in a quest to find the college quarterback in possession of the semi-prohibited plant. The costly months-long investigation saw investigators digging through Francois’ trash all in an effort to collect enough evidence for a search warrant.

According to the Orlando Sentinel, an anonymous male tipster stated he saw a grocery bag filled with cannabis while he was a guest inside Francois’ apartment in February. Acting on the anonymous allegation, Tallahassee police started digging through the quarterback’s trash months. According to the report, his trash was searched on four separate occasions and trash pickup usually occurs weekly.

The collection of trash reportedly yielded cannabis residue, weed dust, and was used to obtain a search warrant of his apartment. Last Thursday, Francois’ apartment was searched and 17 grams of marijuana were discovered. According to ESPN, the quarterback claimed the weed belonged to his girlfriend. Nevertheless, Francois was punished.

The FSU football player was not arrested nor charged with any felonies. Instead, he’ll have to attend a drug diversion program which will likely involve random drug testing for a period of time, usually a year.

FSU’s new football coach, Willie Taggart is standing beside his player. He said he met with Francois and discussed the incident which the team will be handling internally. Taggart told reporters:

He’s still with our football team … We talked about his responsibility as a student athlete here, and he understands my expectations and what I’m looking for, especially when it comes to our quarterback.

Some who do not understand the politics surrounding why cannabis is still illegal under federal law may be quick to judge Francois and ask the question, “Why would such an up and coming quarterback, who plays for one of the nation’s best teams, run the risk of getting kicked out of college and forfeit a potential NFL contract?” The answer may be something as simple as Francois may just be using cannabis as the best medicine for a chronic brain condition which affects nearly everyone who plays football.

Chronic traumatic encephalopathy (CTE) was discovered by Bennet Ifeakandu Omalu, a Nigerian-American forensic pathologist and is believed to be a brain condition which reaches epidemic proportions among football players, soccer players, and other athletes who experience repeated blows to the head while playing contact sports. Since the landmark discovery, several scientific studies have been conducted which reveal quite startling statistics.

Ninety-nine percent of the brains of former NFL players have shown symptoms of CTE. And eighty-eight percent of former collegiate players’ brains were shown to have CTE.

“What does CTE have to do with Francois’ arrest?” one might be tempted to ask. The answer is common sense and serves not only to illustrate America’s failed attempt to wage a destructive war on cannabis users, but also monumental ignorance about how cannabis helps sufferers of CTE.

Several NFL players with CTE have committed suicide over its effects, with some even donating their brains for research following the termination of their lives. The condition should be treated with the best medicine available. To many former NFL football players, cannabis is the best natural medicine available.

Currently, cannabis’ effects on CTE are being studied by Johns Hopkins University School of Medicine and the Pennsylvania Biotechnology Center, among other research institutions. But for former players like Eugene Monroe, a Baltimore Ravens tackle, the ability of cannabis to fight CTE is without rival. Monroe said, “We now know that [opioids] are not as safe as doctors thought, causing higher rates of addiction…and we have cannabis, which is far healthier, far less addictive, and quite frankly, can be better in managing pain.”

Frankly, the Tallahassee PD should give Francois his medicine back, apologize for digging through his trash and leave the man alone. The only thing Francois could have done to prevent his cannabis shaming would have been to have obtained a Florida medical marijuana card, and used his medicine legally, without fear some cop would dig through his trash to hold it against him in a court of law.

However, lawmakers, growers, and the inaccessibility of dispensaries in Florida are hampering the enactment of Florida’s medical marijuana program. It’s time law enforcement, legislatures, and medical entities in Florida get their proverbial act together and stop shaming pot smokers. Spending thousands of tax dollars on a victimless crime, violating one’s privacy, and denying a football player access to his medicine is a crying shame.

Francois now has to do community service, avoid any criminal activity for a period up to a year, and must also pay a fine of $ 100 for prosecution to the state attorney’s office. Coach Taggart noted Francois now has to be more careful:

He’s got to be smart about who he’s around and what he’s around, and make good decisions…I advise him to just make sure he’s around his teammates all the time.

That seems like good advice, but better advice might be to drop out of FSU, sign a fat contract with the Canadian Football League and enjoy all the weed you want as Canada is about to legalize this medicine on a national level.