Spread the love Austin, TX — The Free Thought Project originally reported on a cellphone video of a police killing… 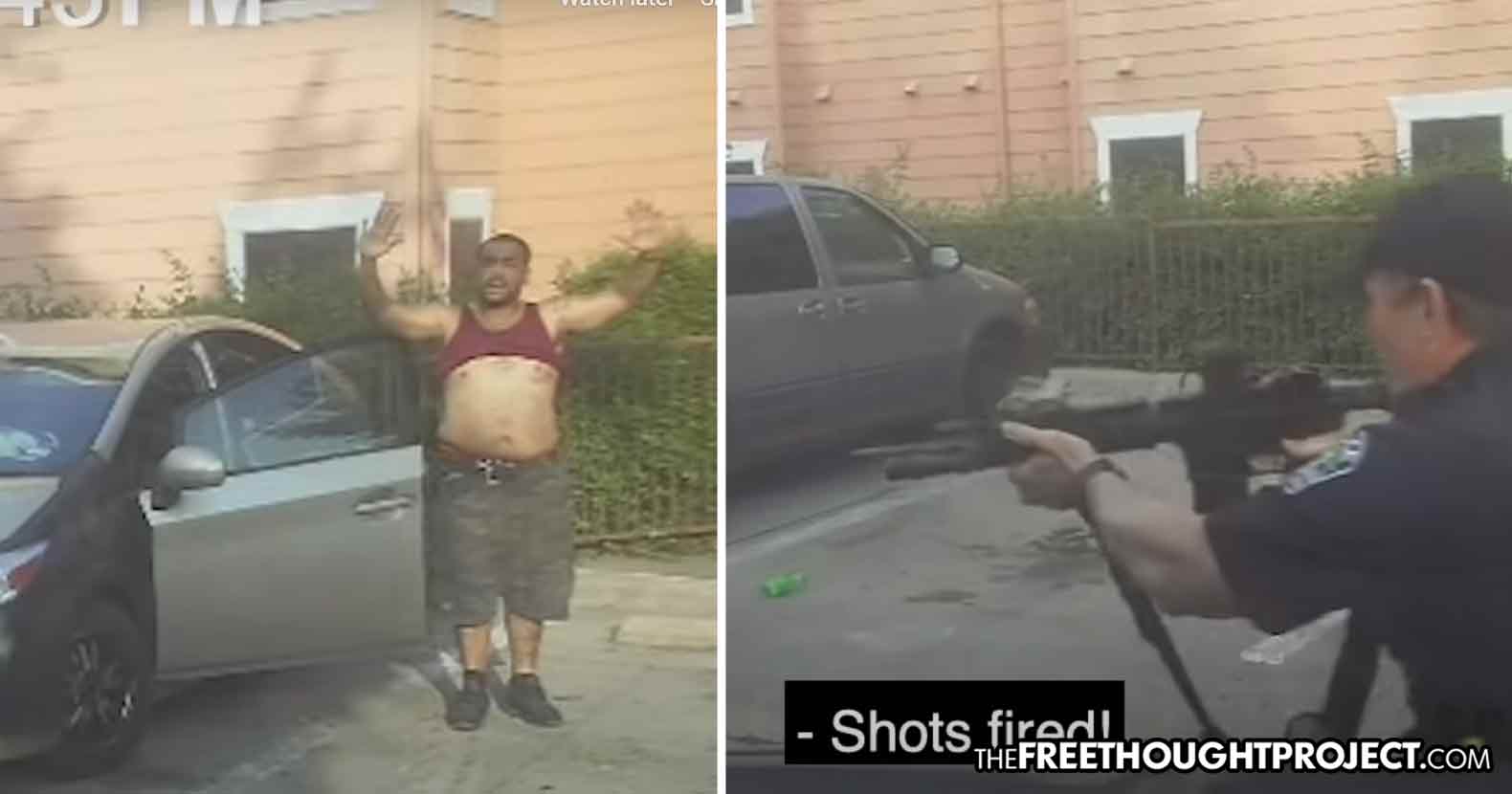 Austin, TX — The Free Thought Project originally reported on a cellphone video of a police killing in Austin, Texas in April which was so disturbing witnesses reported it as if it were a murder. In the video, a man is seen trying to surrender to police with his hands in the air, moments later, he’d be killed by a police officer firing his AR-15. The following month, police admitted 42-year-old Michael Ramos had no gun and two months later, they finally released their own video of this senseless execution.

The fact that Ramos had no gun is extremely important as police based their entire response of multiple units, aggressive tactics, bean bag rounds, and eventual execution — all based on the falsehood that Ramos had a gun.

“Mike Ramos does not appear to threaten but ends up dead. There’s got to be a better way,” Austin Mayor Steve Adler said in a statement at the time. “I’m very disturbed.”

According to police, they responded to a 911 call in April about a man possibly doing drugs in an apartment parking lot and being armed. Manley said officers were investigating reports of people in a car, including an armed man, doing drugs when they encountered Ramos.

The 911 caller’s credibility is certainly questionable.

“They’re in the car smoking crack and cooking meth,” the caller said. Police found no such meth.

As the 911 operator tries to clarify the claim, the caller says, “He’s holding it.”

There was never a gun.

“When you get a report there’s a gun involved, you have to assume that the information that’s been given to 911 is accurate, and you have to respond accordingly,” Dennis Farris, a retired Austin police officer, told KVUE, adding that sometimes callers lie to get police out there faster. This appears to be the case in Ramos’ death.

“If you give bad information, you’ve not only put the person that you’re calling about … you might put their life in danger. You’re also putting the officer’s life in danger,” Farris said.

“I think there’s an argument to be made that if the 911 caller did not specifically make these statements that were not true, then the police officers wouldn’t have shown up, wouldn’t have reacted the way that they did,” Rick Flores, a criminal defense attorney and former Travis County prosecutor, said.

But the caller did give false statements and police did react that way.

As the newly released police video shows, Ramos, a 42-year-old Hispanic man was seen in the video exiting the car when ordered by police. As he gets out, he raises his shirt to show officers that he is unarmed. He is seen in the video with his hands in the air trying to talk to police.

At first, Ramos is entirely compliant. When officers tell him to exit the vehicle, he does so. He then puts his hands above his head.

“Man, what the f**k, man,” Ramos says of the massive police response which appears to frighten him.

“Michael Ramos, you’re going to get impacted if you don’t listen,” an officer says, according to the video.

He then says, “don’t shoot,” as he waves his hands at the officers.

For roughly another 30 seconds, Ramos holds his arms in the air as he continues to ask the officers what he did. As he has multiple rifles and pistols pointing at him, Ramos gets increasingly nervous and stands behind his car door, ignoring police commands to walk toward them — after all, every way he turns, he faces a gun barrel.

The entire time, Ramos had his hands in the air. He never attempted to get back in the vehicle and had proven to cops that he was unarmed. Ramos was merely talking with the officers, asking them why they were stopping him. Then, without warning, while Ramos still had his hands in the air, a rookie cop opened fire with a beanbag round.

This likely sent Ramos into panic, thinking he was about to be killed. Sadly, he would be right.

After being shot with a beanbag round over an apparently bogus 911 call, Ramos tried to get away from the threat. He jumps in the car and attempts to drive off. As he attempts to flee, however, another cop, officer Christopher Taylor opens fire with an AR-15, dumping three rounds into the fleeing man, who was only suspected of being a person of interest in an alleged crime.

The shots killed Ramos, who then crashed his car.

This was the second time in less than a year that Taylor killed someone while on the job. According to the Austin American Statesman, Taylor was one of the officers who fatally shot 46-year-old Mauris DeSilva, who was wielding a knife in the gym at his condo in downtown Austin in July 2019.

Just like this time, Taylor was placed on administrative leave but returned to full duty shortly after — to kill again less than a year later.

“I’ll never forget the face he made when he was confused. That’s what staying on my mind and I feel him and that hurts. That’s a part of me,” Ramos’s mother, Brenda Ramos said.

Below is the original cellphone video and though it is disturbing, had it not existed, this story would likely be playing out far differently as police may never have admitted that Ramos was unarmed.