Don't mess with Polyana A man who tried to rob the MMA fighter, Polyana Viana, outside her apartment in Brazil,… 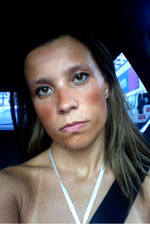 A man who tried to rob the MMA fighter, Polyana Viana, outside her apartment in Brazil, received his comeuppance in no uncertain terms, when the UFC competitor kicked the living shit out of him.

Viana was outside her Rio de Janeiro home when the man approached her, informed her that he was armed, and told her to give him her phone.

But this was neither the time, nor the place, for this kind of foolishness.

Viana jumped up 4 feet in the air, punched the man twice in the face, then brought him down with a Dennis Tueart Overhead Kick. She then placed him in a rear naked choke, changing to a Partial Left-Handed Lobotomy, executed a stinging Regensburg Bollock-Strangler, a full-on Highland Fling, and a Pomeranian Ankle-Crippler, before giving him his marching orders, with his tail between his legs, and sending him for an early bath.

"He said he had a gun, but I could tell he was just pleased to see me."