Here I come again, with my big, stupid mouth US President, Donald Trump, has told anyone still not fed up… 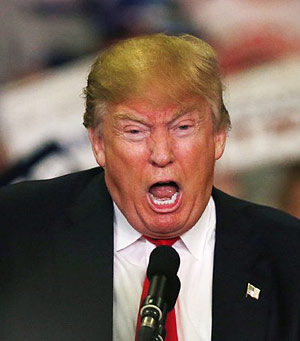 Here I come again, with my big, stupid mouth

US President, Donald Trump, has told anyone still not fed up of listening, that he is not yet satisfied with the impression the public have of him, and will continue doing his utmost until his position has become completely untenable, and he is locked away in a mental institution.

The 'president' was speaking to viewers in a TV address after his Thanksgiving dinner, and said that, although he realizes he is already regarded as 'absolutely mad', this isn't enough, and he won't rest until a mouth gag and a straitjacket are produced.

Trump had earlier commented on the CIA report on the murder of Saudi Arabian dissident journalist, Jamal Khashoggi, and the involvement in that slaying, of Saudi Crown Prince, Mohammed bin Salman. Trump said:

"They didn't conclude. They have feelings certain ways. I have the report, they have not concluded, I don't know if anyone's going to be able to conclude the Crown Prince did it."

Meanwhile, a shitload of other people were concluding that, here was a man who should probably not be trusted to conclude on too many issues beyond what color tie to wear on any given day, or which toothpaste he would like to use to brush his tushy-pegs.