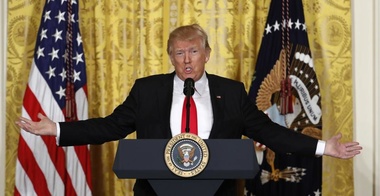 President Donald Trump has said he is trying his best to comply with the wishes of Congress by replying to their letter about the murdered Saudi dissident journalist, Jamal Khashoggi, but can't for the life of him, remember who Khashoggi was.

Senators sent the letter to Trump in October, giving him 120 days to respond. That time limit expired last Friday.

Today, however, the president said he had wracked his brain overnight to try and recall the victim in question, but had come up with nothing.

He was shown pictures of Khashoggi, and transcripts of conversations he had on the subject after the 2 October killing at the Saudi consulate in Istanbul, but just shrugged his shoulders.

He was even shown a bloodstained keffiyah (headscarf), and a big saw, but just stared at them glassy-eyed, and shook his head.

"I just don't remember," said Trump, adding, "but I know it wasn't the prince."