A campaign group is refusing to transfer the domain name thebrexitparty.com to Nigel Farage’s Brexit Party unless it receives over… 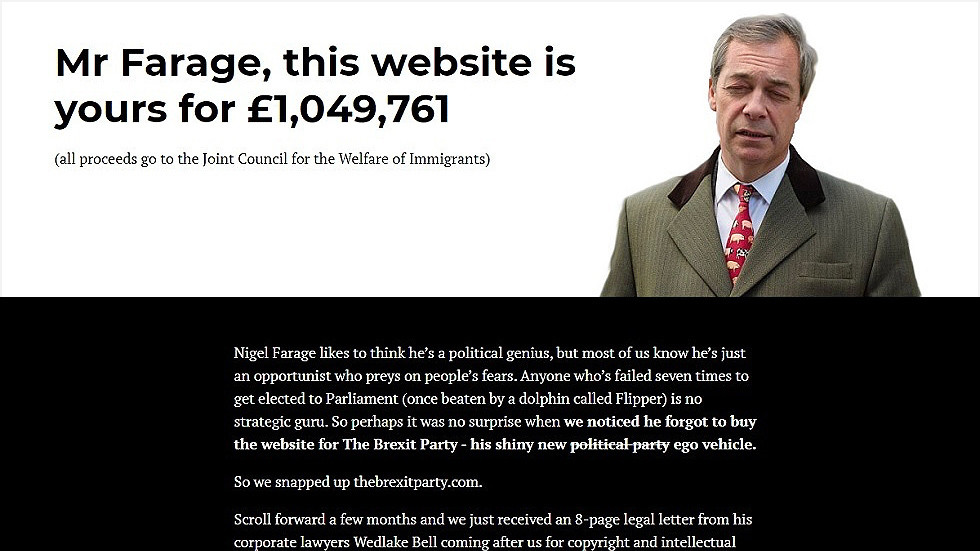 A campaign group is refusing to transfer the domain name thebrexitparty.com to Nigel Farage’s Brexit Party unless it receives over £1 million ($ 1.3 million), ridiculing them in the process for having cited EU law.

Led by Donkeys – the anti-Brexit campaign group that has gained publicity for its stunts targeting UK politicians – insists that it will not relinquish its website name, which is similar to Farage’s thebrexitparty.org.

The group is cheekily demanding over £1 million – a fee it says will increase by £50,000 ($ 64,400) each day – claiming that the total amount, should it receive the ransom, would be donated to the Joint Council for the Welfare of Immigrants (JCWI).

In a copy of the party’s legal letter to the anti-Brexit campaigners, it claims that the group infringed its copyright by using a Brexit Party logo – citing European Union patent law.

Led by Donkeys has mocked the behavior of Farage’s party, boasting that he had complained that the group had “ripped off his crappy logo back in May.” They insist that the website is theirs and that Farage has “no legitimate claim to it.”

Also on rt.com Farage accused of ‘bottling it,’ as Brexit Party leader declares his party WILL NOT fight for Tory-held seats in snap election

The spoof website features a cost accumulator counter and an ‘election advent calendar,’ which offers “examples of lies, lunacy and hypocrisy from the Brexit Party,” as well as the Conservatives.

The crowdfunded activist group has predominantly focused on creating huge billboards with seemingly hypocritical tweets by pro-Brexit UK lawmakers. It has also produced eye-catching videos such as one in October that featured a dramatic anti-Brexit campaign, incorporating a farm tractor ploughing the message “Britain now wants to remain.”

As UK braces for post-lockdown ‘crime tsunami,’ some turn to TRAINED DOGS for security