The Queen’s secretary announced she had withdrawn her invitation to have tea with Donald Trump. What initially started out as… 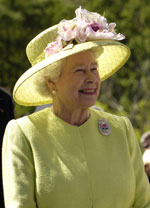 The Queen’s secretary announced she had withdrawn her invitation to have tea with Donald Trump. What initially started out as a full-scale State Visit with tiaras and a carriage ride to Buckingham Palace, (a Trump request) was previously reduced to a visit by limousine with a quickie lunch, no balcony with a flyover.

However, learning that Trump called Canada’s Prime Minister Justin Trudeau weak the quickie luncheon date was reduced to afternoon tea, arriving from Heathrow by way of the Heathrow Express. Instructions followed: Take the Heathrow Express tube; off at Paddington Station. Transfer to the Piccadilly line; apart from Green Park. Walk through Green Park to Buckingham Palace. Show credentials at the gate.

Though the world is now prepared to never underestimate the gross downward spiral of Donald Trump’s behavior, the Queen canceled afternoon tea following word reaching Buckingham Palace that Trump had separated children from parents, and holding babies and children hostage until the Congress appropriated funds for his Mexican wall.

Outraged, the Queen had had enough. Paraphrasing Hugh Grant’s speech from the film Love Actually, the Queen announced: “This is the land of Shakespeare, Churchill, the Beatles, Sean Connery, Harry Potter, David Beckham, Daniel Craig, Andy Murray, Mark Strong, Ewan McGregor, David Tennant, Colin Firth, Benedict Cumberbatch and Harvey Nick’s. No kidnapping, upstart landlord from the colonies who doesn’t realize his rightful place next to Snooki on Jersey Shore, is going to disgrace my palace with his presence.”

She received an immediate telephone call from Barack Obama, “Bubbles, you grew a pair. Why all the guys on your man list?”

“And he can kiss goodbye any dream of a Nobel Peace Prize.” Her Majesty further threatened to have Trump arrested if he set a bone-spurred-foot on British soil, and send him to be tried for human rights violations at the Hague.

Prime Minister Theresa called next. “Queen, I wanted to give him the ax first. Now I’ll have to issue a, Me Too, statement.”

“Look, May Day, announce that Barack Obama is to receive a Knighthood. That’ll set Trump’s hair on fire.”