South Africans have been celebrating after their rugby team beat England 32-12 in the world cup final in Japan. The… 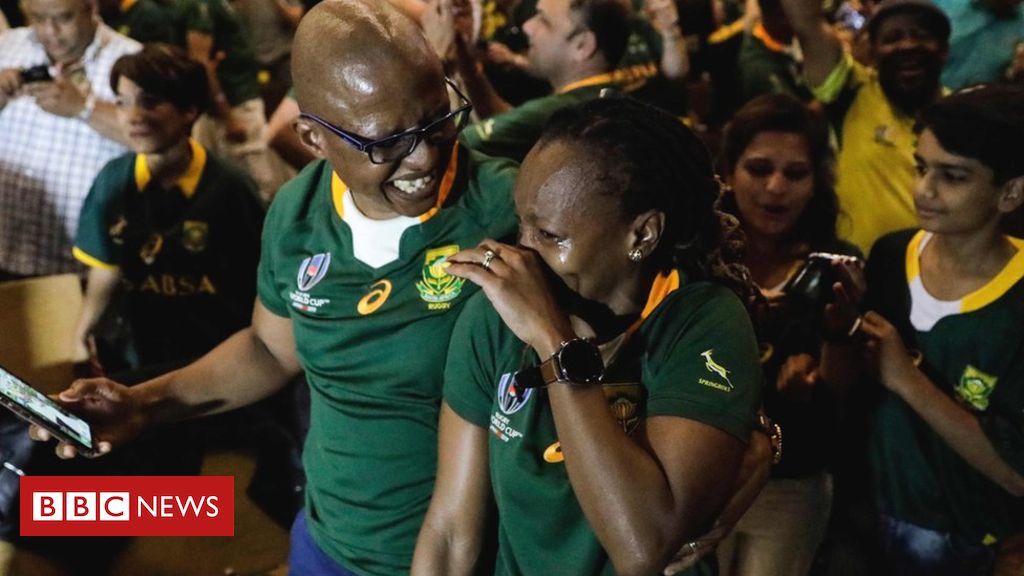 South Africans have been celebrating after their rugby team beat England 32-12 in the world cup final in Japan.

The victory under Siya Kolisi, the team’s first black captain, was another symbolic moment for the Springboks.

In 1995, former President Nelson Mandela’s famously celebrated on the podium with captain Francois Pienaar after their first world cup win.

This is the third time that the Springboks have won the trophy equalling New Zealand’s record.

South Africa’s President Cyril Ramaphosa, who was in Japan for the final, tweeted: “We are the champions.”

“We are so grateful to the people of South Africa,” Kolisi said after the match.

“We have so many problems in our country. [The team] come from different backgrounds and different races and we came together with one goal and we wanted to achieve it.

“I really hope we’ve done that for South Africa, to show that we can pull together if want to achieve something.”

‘Not just a win on the pitch’

People have been screaming chanting and singing, bringing back the spirit of 1995 when South Africa won the world cup for the very first time. And today, they are chanting captain Siya Kolisi’s name.

There will be celebrations here long into the night – across townships, cities and villages – because this win is not just on the pitch, it is not just about rugby. It is about the social cohesion that the country is still trying to achieve 25 years after the end of apartheid.

This brings the whole nation together particularly in light of the sluggish economy, the unemployment rate is nearly 30%, and corruption has also become a high profile problem. But the victory will lift people’s spirits and allow them for one day to forget their ills.

Fans rejoice across the country

South Africans have been tweeting their reaction. One fan, in Johannesburg, can be heard screaming with joy above the sound of vuvuzelas, or horns, being played in the neighbourhood.

Fans have also been celebrating in Cape Town, according to the video in this tweet filmed at a viewing centre when the final whistle blew:

Fans at another venue in Cape Town began singing Shosholoza, a song originally sung by gold miners that has become an unofficial anthem for sports fans in the country.

At another bar in the city, a solitary England fan looked on as locals celebrated the victory.

Is everything going as well as the sport in South Africa?

On Friday, there was a stark reminder from the economic ratings agency Moody’s that all is not well, when it cut the outlook on its credit rating from stable to negative.

The latest unemployment figure offers no relief. Data released on Tuesday show that 29.1% of the working-age population are jobless – the highest rate in 16 years.

President Cyril Ramaphosa came to power in February last year promising a change from the economic problems and corruption that dogged his predecessor Jacob Zuma’s time in power.

But he has struggled to turn things around.

Despite a burgeoning black middle class, the economic inequalities that apartheid entrenched live on, 25 years after its demise.

Land ownership remains a major issue with the white minority still owning a disproportionate amount. The governing ANC has pledged to deal with this, but it is not yet clear how.

President Ramaphosa will hope that the nation can be inspired by the Springbok captain’s words, but come Sunday morning South Africans will still face these problems.