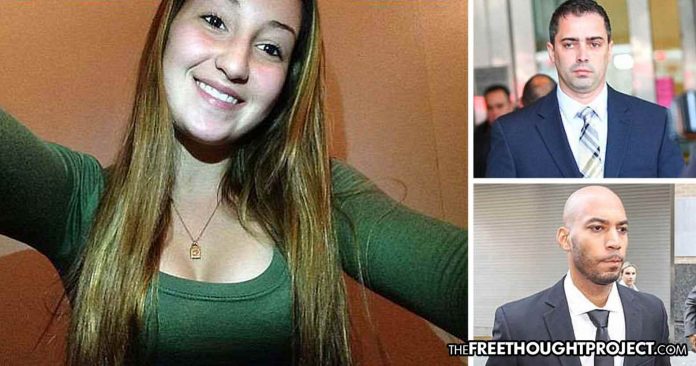 New York, NY — It has been over a year since then 18-year-old Anna Chambers accused two on-duty NYPD officers of raping her in the back of a police van on the night of September 15th, 2017. As emphatically as she claims she was raped and did not consent to having sex with two police officers, she asserts not only have the police continued to attempt to intimidate her but the very justice system she looked to for help was set up to help the alleged rapists. Now, her claims have been proven correct.

Both of the officers, Eddie Martins and Richard Hall had faced up to 25 years in prison on the original rape and kidnapping charges, But this week, they had all those charges dropped. Because the system is set up in a way to protect predator police officers, the charges have been reduced to bribery and official misconduct. They have both since been released on their own recognizance.

“It’s just outrageous,” said Chambers’ lawyer, Michael David. “It was a clear-cut case. She was kidnapped. There was DNA evidence,” he said.

After Chambers’ case garnered national attention, New York lawmakers were forced to pass a bill last year banning cops from having sex with people they arrest. Up until last April, cops in New York could have sex with people in custody, so long as they claimed it was consensual. And that’s exactly what happened in this case.

Both officers kidnapped Chambers in 2017 for allegedly possessing marijuana. The cops conveniently let all of her friends go, and kept only the tiny teen girl.

As TFTP reported, Chambers used social media to voice her outcry for justice. She stated she was never actually arrested, just dropped off near the police station after she says Hall and Martins had their way with her, both men raping her while she was still in handcuffs.

Her friends were also told she was being arrested and could be picked up at the NYPD station. They were also allegedly told not to follow the van, a possible indication they had planned the rape beforehand.

After she was raped in the police van and went to the hospital afterward, nine cops allegedly showed up to harass and threaten her.

“They came with nine cops to intimidate her and her mom, to discourage them from coming forward and reporting the rape and sex assault,” attorney Michael David, told The Post.

The officers accused Chambers of making a false report, and suggested that she had made accusations against cops in the past, which she has not.

“Anna said [the officer] was trying to manipulate a rubber band over his name tag, so she couldn’t see who it was,” David said.

“He kept saying to Anna and her mom, ‘How do you know they were real cops?’ ” David said.

The harassment expanded later as Corey Guskin, 59, who works for the city, was captured on video harassing the teen over the incident. Because it was caught on video, he was officially charged.

The law cops were using to protect themselves from Anna’s testimony happens to exist in 34 other states as well where police officers can claim sex with someone they have taken into custody was consensual. Buzzfeed News described the previous situation in New York:

It was one of 35 states where armed law enforcement officers can evade sexual assault charges by claiming that such an encounter — from groping to intercourse — was consensual.

The fact that this was legal at all speaks to the nature of the sadistic above the law attitudes of police officers.

While the same standard passed in this bill already existed in jails and police stations, before its passage, police could rape someone in their custody, claim it was consensual and then get off with a slap on the wrist misconduct charge instead of felony rape—which happens to be the case with Chambers’ attackers.

As Chambers’ lawyer said on Wednesday, “You can’t have consent, when you have two cops on duty. These are two cops over six feet, over two hundred pounds.”

“She is 5-foot-2, 90 pounds,” he added of Chambers, who did not attend Wednesday’s court hearing, according to the NY Post.

“They have guns, they have handcuffs. You can’t have consent under those circumstances.”

We agree. When armed individuals chain a person’s hands and kidnap them, there is no reasonable manner in which that person could consent to having sex. Even if there was no struggle and the arrested person goes along with police demands, when you are under duress and kidnapped against your will, there is no consenting.

As Buzzfeed reported at the time, in a sample of 158 police officers who’ve been charged with sexual assault, sexual battery, or unlawful sexual contact with somebody under their control, at least 26 have been acquitted or had charges dropped based on the consent defense, according to a Buzzfeed review of a Buffalo News database of more than 700 law enforcement officers accused of sexual misconduct.

These numbers are indeed startling.

“Cultural shifts happen, but what we need to see is a policy shift,” said Terra Burns, an advocate in Alaska who has worked to expand police sexual assault laws. “There’s a long entrenched history of institutionalized rape culture that has to change.”

Indeed, one need only browse through our archives to see the brutal reality that is police sexual misconduct. Arguably, the reason it is so pervasive is the fact that, like these two NYPD cops illustrate, they can get away with it with little to no consequences.

Will the Midterms Change Anything?

Free Speech Freak Out: Censors Panic As Musk About To Purchase Twitter