Rep. Justin Amash walks up the House steps for a vote in the Capitol on May 9, 2019. Photo: Bill… 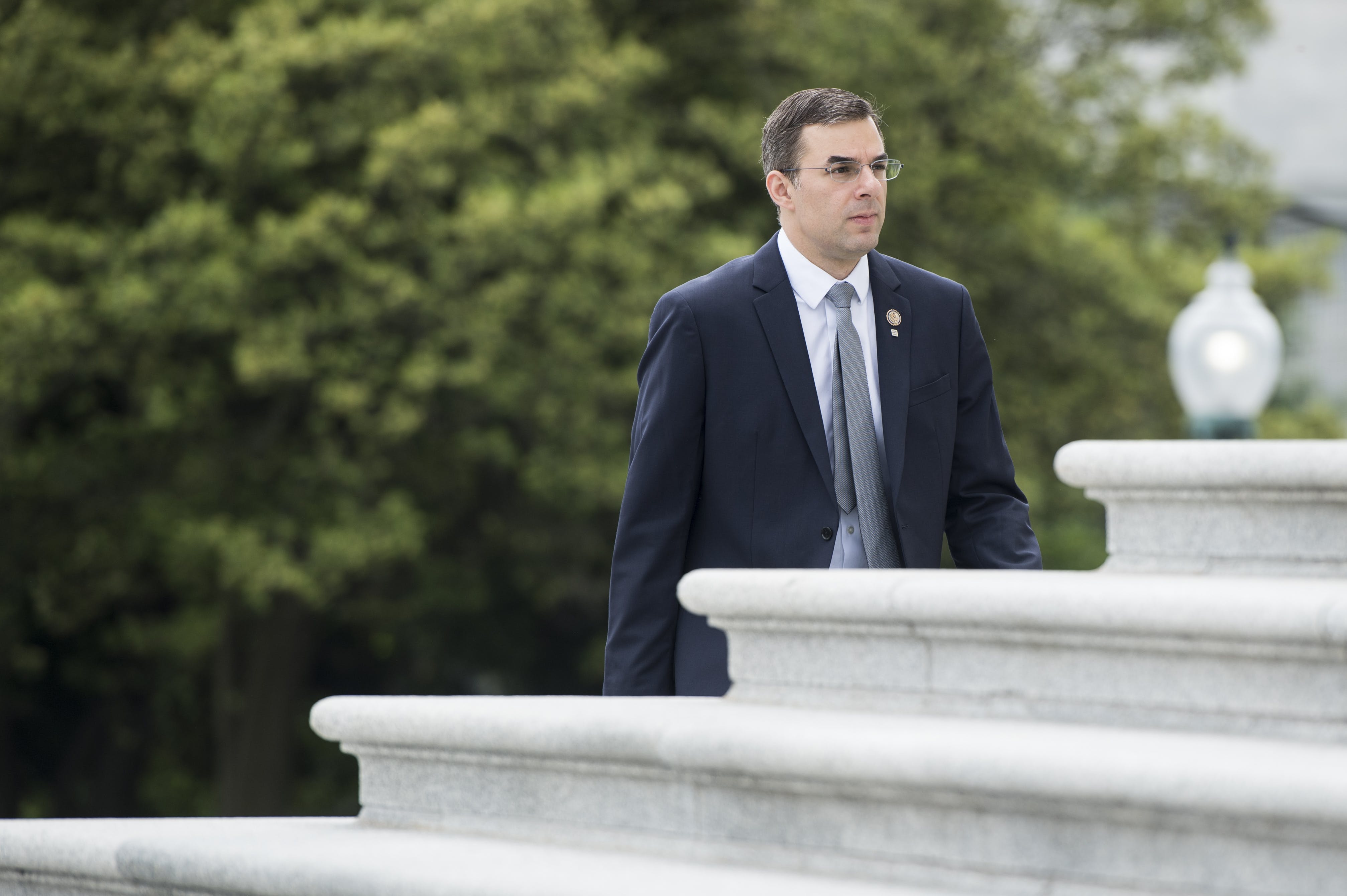 Rep. Justin Amash walks up the House steps for a vote in the Capitol on May 9, 2019.

Congratulations to Justin Amash! On Saturday, the representative from Michigan’s 3rd district became the first Republican member of Congress to call for impeachment, arguing that President Trump’s actions and behavior, as detailed in special counsel Robert Mueller’s 448-page report, “meet the threshold” for high crimes and misdemeanors.

Amash, who is Palestinian-American and a proud Tea Party libertarian, has clashed with the president and his GOP colleagues before, on a range of issues — from the war in Yemen to funding for the border wall to the Muslim ban. But his decision to declare his open support for impeachment is far and away the most dramatic and defiant moment of his political career.

Here’s the start of his tweetstorm on the Mueller report (and it’s very worth your time to read the whole thing).

Here are my principal conclusions:
1. Attorney General Barr has deliberately misrepresented Mueller’s report.
2. President Trump has engaged in impeachable conduct.
3. Partisanship has eroded our system of checks and balances.
4. Few members of Congress have read the report.

The thin-skinned Trump was quick to denounce Amash on Sunday morning, calling him a “lightweight” and a “loser,” while again falsely claiming that the special counsel found no evidence of obstruction of justice. (Spoiler alert: the Mueller report contains at least 10 different explicit examples of Trumpian obstruction.)

Amash joins more than 900 former federal prosecutors, from both Republican and Democratic administrations, who believe Trump’s behavior, as outlined by Mueller, would have resulted in “multiple felony charges for obstruction of justice” were he a private citizen and not the president of the United States. Conservative law professor J.W. Verret, a former member of the Trump transition team, has written how the “elaborate pattern of obstruction” uncovered by the report is, at a minimum, enough “to get the impeachment process started.”

Plenty of liberals are asking why there aren’t more Republican members of Congress with the guts, eloquence or honesty to say what Amash has said. It’s a good question. But a better, more relevant question is this: why aren’t there more Democrats willing to say the same?

After all, the two most senior members of the House Democratic leadership — Speaker Nancy Pelosi and House Majority Leader Steny Hoyer — as well as key Democratic committee chairs, such as Jerrold Nadler and Adam Schiff, have spent the past few weeks loudly and repeatedly throwing cold water on the idea of impeaching Trump. Pelosi has called impeachment “divisive” and “not worth it.” Hoyer, on the day the Mueller report was released and before he had even read it, said, “Going forward on impeachment is not worthwhile at this point.” Last week, in the wake of the Trump administration’s decision to defy congressional subpoenas, Nadler told CNBC: “I don’t want to make it sound as if we’re heading for impeachment. Probably we’re not.”

What is wrong with these people? Why are they so afraid of their own shadows? Pelosi told CNN after last November’s midterms that impeachment should be done in a “bipartisan way.” Well, Amash is a Republican and one of the most conservative members of the House. So it’s bipartisan now. In fact, a few other Republicans might throw their weight behind impeachment too — if Pelosi & Co. can be bothered to hold the hearings, make the case, and call a vote.

Some House Democrats worry that a failure to secure conviction in the GOP-controlled Senate, where they lack the requisite two-thirds majority, might cost them the 2020 presidential election by riling up the Trump base and boosting Republican turnout. Pelosi told an audience at Cornell University earlier this month that she believes Trump is “goading” Democrats to try to impeach him in order to help him “solidify his base” of supporters ahead of next November.

Second, the president’s cultish base needs no new excuses to get riled up, and needs no solidifying. These are people who are still chanting “Lock her up!” at Trump rallies. The president’s approval ratings among Republicans, lest we forget, stands at 90 per cent.

Third, the Democrats should worry less about the GOP base turning out next year and much more about their own. A big majority of the Democratic base wants to see Trump impeached. How is it bad politics to give them what they want?

Fourth, what happens over the next 18 months if they do nothing? Can they not see how there is a clear political cost to not impeaching him, too? Listen to Elizabeth de la Vega, a former federal prosecutor who served under presidents Reagan, Bush Sr., Clinton and Bush Jr.:

If Dems never conduct a formal House Judiciary Committee impeachment inquiry, Trump’s 2020 message will be that Dems’ failure to conduct impeachment proceedings “proves” that even *they* didn’t think he did anything that was all that bad, including his obstruction of justice. https://t.co/Oz3pK7618Y

Don’t believe her? Check out Trump’s own belligerent behavior since top congressional Democrats effectively took impeachment off the table. “My Campaign for President was conclusively spied on,” the president tweeted last week. “Nothing like this has ever happened in American Politics. A really bad situation. TREASON means long jail sentences, and this was TREASON!”

My Campaign for President was conclusively spied on. Nothing like this has ever happened in American Politics. A really bad situation. TREASON means long jail sentences, and this was TREASON!

Ludicrous charges of treason aside, Trump has also said it would be “appropriate” for him to speak to Attorney General William Barr about investigating his 2020 Democratic opponents. This is the direct and unsurprising result of immunizing this president from the impeachment process. This is what happens when House Democrats say it’s “not worth it.” Trump now sees himself as unchecked and unrestrained; able to say and do as he pleases. It is an age-old lesson: if you give the bully a pass, he doesn’t back off or calm down. He comes back to bully some more.

Congressional Democrats need to find their spines. This is a period of unprecedented danger for the republic, with a lawless and reckless president gearing up for the dirtiest of presidential campaigns, while committing impeachable offenses in front of our eyes on a near-weekly basis.

On impeachment, therefore, and with apologies to Hillel the Elder, the only real question the Democrats need to ask themselves is: If not Trump, who, and if not now, when?

Podcast: Kevin Gosztola Discusses the Latest Developments in the Case Against Julian Assange