COLUMBUS, OH – Researchers at the Cleveland Clinic are studying soccer players around the world for their unique ability to… 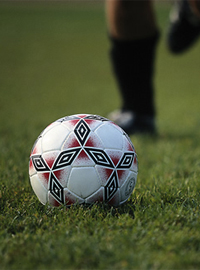 COLUMBUS, OH – Researchers at the Cleveland Clinic are studying soccer players around the world for their unique ability to recover quickly from injury.

“Soccer players have a totally unique physiology in that when they get hurt, which happens a lot, they can recovery in a very short time, sometimes instantly” said lead researcher at the Cleveland Clinic, Keizer Salem. “A month ago I watched a European soccer player laying on the field, screaming and crying in agony and pain from an apparent injury, and then suddenly he was up and running at full speed. Imagine if we could all do that!”

To conduct the research, physicians will monitor soccer players during a competitive game. When a soccer player is hurt data will be collected on the soccer player’s body’s reaction to the injury and the recovery process.

“We are currently only planning on collecting data during a single match because, well, almost every soccer player falls down hurt during a soccer match,” said Salem. “It’s funny that soccer doesn’t look particularly brutal. But wow do those people get hurt a lot. A lot, a lot. Even when it looks like nothing happened, soccer players get hurt.”

While many sports have athletes that suffer injuries during a game, with some even continuing to play after an injury, soccer players in general often have little to no lasting impact to their injuries.

“Unlike, say, football, soccer players are remarkably healthy,” said researcher Benicio Almuerzo. “We’ve already examined many soccer players after games and even though they suffered what looked like true, agonizing pain during the game, the soccer players all seemed in perfect health after the game – except for the insane amount of sexually transmitted diseases they have. But that goes without saying.”

Researchers have noticed already noticed that there may be a link between healing and the display of certain colors, specifically red and yellow.

“One thing that will be interesting to work through as part of this study is the effect of color on players and their injuries,” said Salem. “We’ve observed that on occasion, while a player is writhing around in unbearable pain on the ground, a person in a bright yellow shirt will run up to them and hold a yellow or red card in the air. Once that occurs, almost always the player on the ground jumps right up and seems back to perfect health. Interesting, no? There is some speculation that the cards themselves are some sort of magic, but really, that’s only pure speculation.”

If researchers can replicate soccer player’s healing ability in non-soccer players, healthcare may be changed forever.

“Think about it, if we can replicate this phenomenon, it will be the end of all injuries, end of all disease,” said Almuerzo. “Broken bones? Severed Limbs? Concussions? Cancer? AIDS? Irritable Bowel Disease? All gone. That would be an amazing thing. Especially Gonorrhea. If we could get rid of that, I would be totally stoked. Syphilis too. And crabs.”