Lakeland, FL – Cellphone footage has been released from bystanders who witnessed police officers repeatedly punching and hitting a homeless… 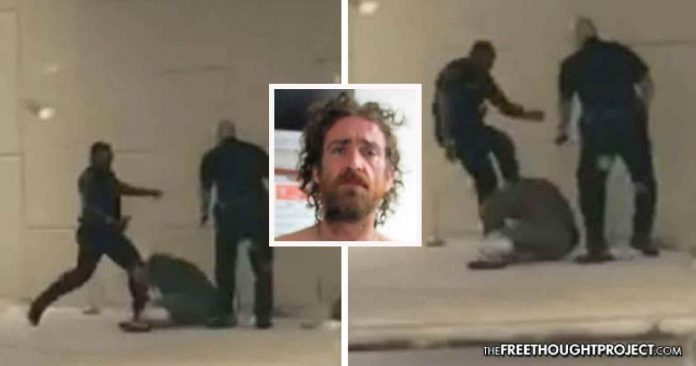 Lakeland, FL – Cellphone footage has been released from bystanders who witnessed police officers repeatedly punching and hitting a homeless man while holding him down on the ground under a bridge.

The resulting outrage on social media has forced the Lakeland Police Department to respond to allegations that its officers beat up a homeless man in an epic display of excessive force.

Justin Abbott, 38, a homeless man was sleeping under a bridge when Lakeland Police Officer JR West woke him up and told him to leave. A second officer, Anthony, arrived to assist.

The officers told Abbott, who was doing nothing more than sleeping, that he was in a “dangerous location” and he had to leave. According to Fox 13 News, he was given a trespass warning but refused to leave. They wrote:

“Police said Abbott shoved Officer Anthony, who fell to the ground, toppling everyone. West deployed his Taser, but it was ineffective and Abbott continued to resist, police said. Officer Anthony stepped back to avoid being shocked, and they tried to deploy it again.”

While it is impossible to know for certain if the police are telling the truth as the video does not show Abbott striking anyone, what is certain is that all he was doing prior to being confronted by the officers was sleeping, and he was not attempting to harm anyone. According to police, the encounter escalated. Fox News 13 continues:

Sgt. Gary Ross, who was not present while Abbott was being beaten, issued statements of support for the Lakeland police officers. His comments seem to imply the officers “feared for their lives” after waking the homeless man:

“He kicked the guy’s arm so he would let go of the Taser, and that worked…It probably saved the officers’ lives. If that guy would have had the Taser and pointed it…it would have incapacitated them. He could’ve got their gun.

Activists claim local laws and ordinances have, in effect, made criminals of the homeless simply because they do not have a home. Lakeland’s local ordinances have also criminalized “sleeping out of doors.” Under Chapter 70, section 5 of the city’s ordinances, sleeping outside is considered “camping” and is not allowed. In fact, one cannot even assume the position of sleeping in public without being guilty of breaking the local ordinance. It reads:

By passing such an ordinance, police now have probable cause to wake homeless individuals, such as Abbott, and to tell them to leave. But the pressing issue was whether or not the police abused their authority, needlessly escalated a conflict to the point which force was deemed permissible, and beat a homeless citizen without justification. The video seems to show West and Anthony giving Abbott a beat down while the homeless man was either face-down or lying on his side.

As The Free Thought Project has reported on numerous occasions, police officers will often shout “stop resisting” while beating a suspect. They then can turn up their use of force from open hand engagements to closed fist engagements.

Predictably, the Lakeland Police Department has said their officers were simply following protocol and nothing they did was against departmental policies. Following the beating, Abbott was taken to Lakeland Regional Medical Facility where he was treated and released.

In a statement, the department promised to conduct a thorough review of its officers’ actions. But conflicts of interest arise when officer actions are investigated by the very department within which they work. The entire procedure often amounts to something along the lines of, “we investigated ourselves and found we did nothing wrong.” But would an outside agency or group arrive at the same conclusion?

Homeless and mentally ill people are often the subject of excessive force from police and in a recent incident in Portland, Oregon, a dozen officers were caught on video cornering and then executing a man inside a homeless shelter last week.

Lakeland police officers do not wear body cameras so their story cannot be verified by video recordings. What can be verified is that Justin Abbott was hit and punched repeatedly for what appears to be nothing more than sleeping under a bridge. Abbott has been charged with trespassing and resisting arrest.

Watch the footage recorded by witnesses:

Gregor Mendel, the Father of Genetics and a Tax Resister, Turns 200

Throwing Money at the IRS Won’t Fix Its Problems

Review: Everything Everywhere All at Once