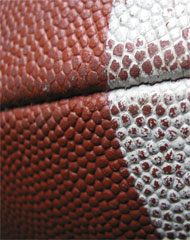 (The Unassociated Press) – The interested T.V. audience for the College Football Playoff ®™ dropped significantly from last season, due to a systemic failure by executives to recognize good entertainment value.

Data analysis suggests that the win by the University of Alabama Crimson Tide ®™ football team versus the University of Oklahoma Sooners ®™ in the 2018 Capitol One Orange Bowl ®™ may have drawn a 10.4 overnight T.V. rating (or 19 million viewers). Viewership purportedly peaked at 11.8 (20.7 million viewers) as Alabama ®™ jumped out to a two-touchdown lead, with Oklahoma ®™ eventually trailing 28-to-0 before the rules of the game were re-explained to both teams.

Meanwhile, the University of Clemson Angry Tiger Cats ®™ outplayed the Notre Dame Fighting Irish ®™ football team to win 30-to-3 in the Good Year Cotton Bowl ®™, an event that apparently yielded a modest 10.3 rating (16.8 million viewers) before peaking at 11.2 (18.1 million viewers) when Clemson ®™ scored immediately before halftime to lead 23-to-3.

By some accounts, previous semifinal games averaged a 13.9 rating and 24 million viewers.

When reached for comment, a spokesperson for the College Football Playoff ®™ deflected concerns and suggested that lower viewership was possibly due to the day of the week (Saturday, December 29th) more than anything. The difficulty in arguing with the logic that Saturday afternoons are designed for snoozing — rather than face the alternative idea that the majority of people just are not interested in watching another Alabama ®™ and/or Clemson ®™ versus (fill-in-the-blank team name) — cannot be overstated.

[Note to reader: the College Football Playoff ®™ is not an officially sanctioned championship event by the National College Athletic Association, which in theory is the sport's governing body.]