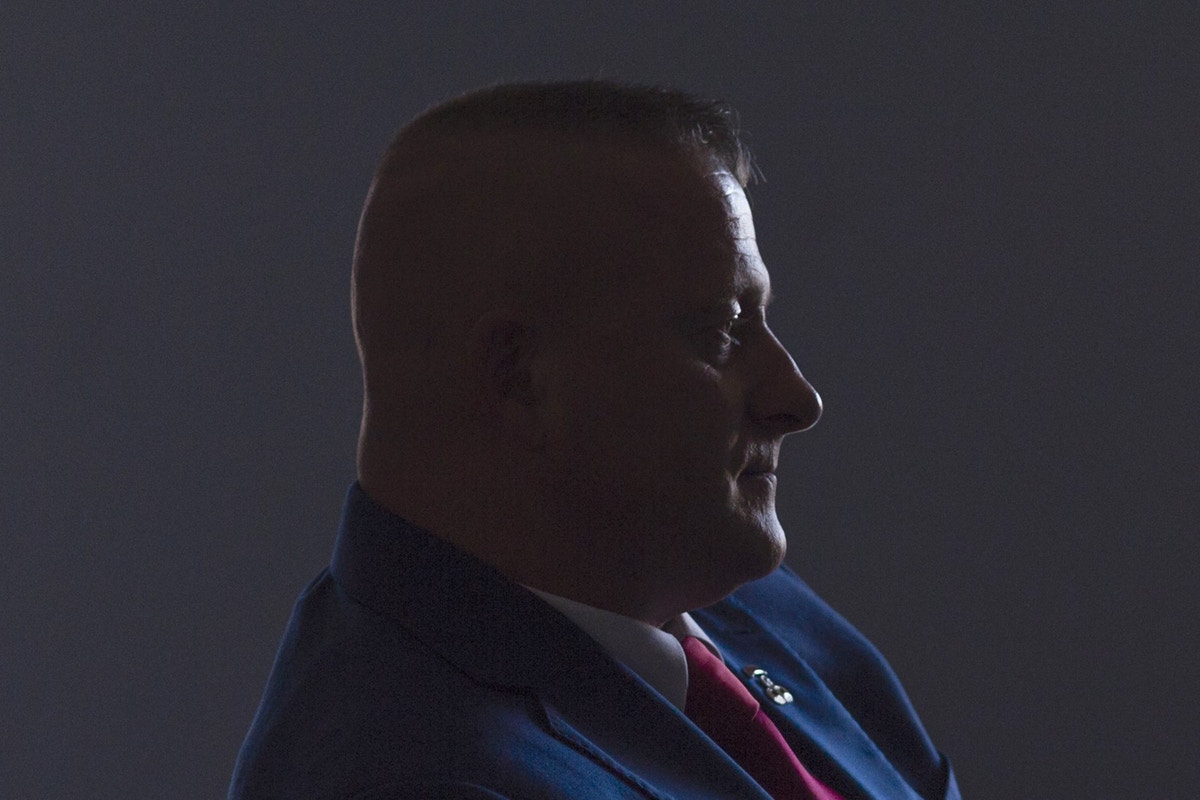 Richard Ojeda is running for president. Ojeda, a West Virginia state senator and retired U.S. Army major, lost his congressional bid in the state’s 3rd District on Tuesday, but saw the largest swing of Trump voters toward Democrats in any district around the country — overperforming 2016 by more than 35 points. Still, in a district Donald Trump carried by 49 points, Ojeda, who rose to prominence leading teacher strikes in West Virginia, lost by 12 points.

Ojeda’s case for his candidacy is straightforward: The Democratic Party has gotten away from its roots, and he has a unique ability to win over a white, black, and brown working-class coalition by arguing from a place of authority that Trump is a populist fraud. He’s launching his campaign with an anti-corruption focus that draws a contrast with Trump’s inability to “drain the swamp.”

His authority — and one of his greatest liabilities — would come, in part, from his own previous support of Trump in the 2016 general election. After backing Sen. Bernie Sanders in the primary, Ojeda refused to support Hillary Clinton, seeing her as an embodiment of the party’s drift toward the elite.

“The Democratic Party is supposed to be the party that fights for the working class and that’s exactly what I do.”

Ojeda turned on Trump early in his term, concluding that the president’s interest in improving the lives of working people like those Ojeda grew up with in West Virginia, or served with in the military, was fake. Now, he wants to break the spell Trump still holds on half the country.

As a state senator, Ojeda led a push to legalize medical marijuana and played a central role in this year’s teacher walkouts that resulted in a rare pay increase for educators. In his congressional race, he ran on a thoroughly pro-labor, progressive platform despite the partisan lean of the district, framing issues as pitting people against corrupt, out-of-touch elites. He focused heavily on the role of Big Pharma in sparking the opioid epidemic.

His energetic campaign style and pull-no-punches approach made him the focus of national attention during his congressional run. His announcement that he will run for president, which is first being reported by The Intercept, makes him one of the first Democrats to formally declare their intentions for 2020. Moves are being made early this year. As The Intercept reported over the summer, former Obama administration official Julián Castro floated a run as early as last summer, and there are already close to a dozen people considered likely to join him on the trail, including Sanders; Sens. Elizabeth Warren, Kamala Harris, Cory Booker, Kirsten Gillibrand, and Jeff Merkley; and former Vice President Joe Biden. A handful of billionaires, including Michael Bloomberg, have also floated the possibility.

Ojeda made his decision to run after surveying the field of potential presidential contenders, and concluding that none of them would be able to stand up to Trump in the way that he could and draw the contrast that’s needed. “We’re going to have quite a few lifetime politicians that are going to throw their hat in the ring, but I guarantee you there’s going to be a hell of a lot more of them than there are people like myself that is, a working-class person that basically can relate to the people on the ground, the people that are actually struggling,” he said. “I’m not trying to throw stones at people that are rich, but once again, we will have a field that will be full of millionaires and I’m sure a few billionaires.”

Speculation in Washington has begun to focus on the possibility that the ultimate Democratic nominee for president is not someone currently being discussed as a frontrunner. A recent poll found “none of the above” topped the list of presumed candidates.

Ojeda was backed in his House bid by the People’s House Project, a PAC run by former congressional candidate and MSNBC host Krystal Ball. She’s supporting his presidential run, but acknowledged in an interview that he’s an unusual candidate for today’s Democratic Party. “I think the biggest challenge for Richard is whether or not people actually want real change. Whether they actually want a nation. Or if they’d prefer to just keep their tribes and their grievances,” she said.

Ojeda said he has never been to Iowa or New Hampshire — the states whose caucus and primary, respectively, formally kick off election season — but plans to make trips to both soon. As he prepares to campaign, Ojeda, who first assumed political office in 2016, will have to grapple with multiple likely immediate objections to his candidacy beyond his vote for Trump: political experience, identity, and his ties to coal country among them.

The Democratic Party’s coalition is fueled by women and an increasingly diverse base. When I asked if a white man from West Virginia could understand what was behind the Black Lives Matter movement, he argued that his experience living in and among the working class — which is heavily made up of black and Hispanic people — gives him insight into that struggle. “I can understand it far better than the millionaires and billionaires sitting around the conference tables in Washington, D.C. That’s a fact. Guess what? I’ve worked side-by-side with those people, I’ve served in the military with the people that lived in those communities,” he said. “I know far more about that life than [elites in Washington] know about that life. So when someone stands up that has a bank account that’s got 50 or 60 million dollars in it, I personally could care less what they have to say about how they’re gonna…how they know what a single parent who is trying to put food on the table feels. Because they don’t.”

His identity, meanwhile, is not so simple. While both his grandparents worked in the West Virginia mines, as is common in the state, one of them immigrated illegally from Mexico to do so. One of his grandparents, after fighting in World World II, died in a mining accident. The Spanish pronunciation of the last name — O-Hayda — was tricky for people in the region, and it has evolved to O-Jeddah. Ojeda’s father, meanwhile, did not follow the career path into the mines, becoming instead a certified registered nurse anesthetist.

His lack of political experience, he said, should not be mistaken for a lack of organizational leadership experience. While he enlisted in the Army as a private out of high school, he said, he rose through the ranks to oversee a vast operation. “When I started in the military, I started as a private, the lowest rank you could possibly go, but I was also the chief of operations for the 20th Airborne engineers in Iraq, where we were in control of over 7,000 engineers. And every single operation that went on throughout the entire country of Iraq went through my JOC, and I was the chief of operations,” he said. The military helped put Ojeda through college and graduate school, and he now uses his experience overseas to argue against militarism and in favor of a diplomatic approach.

Another objection to his long-shot bid could come from the environmental community, which may worry that his advocacy for coal miners, and his roots in Logan County, West Virginia, would mean that he would push a fossil-fuel dependent energy economy. Ojeda said that wouldn’t be the case, but he did note that he sees a limited use for metallurgical coal — which is mined in West Virginia — in the production of steel.

“If we can bail out the banks, there’s no reason we can’t create opportunity for the people who brought light to this country.”

“I think it’s time for us to stop lying. Coal in terms of energy is gonna be overtaken; [natural] gas can do just as much far cheaper — it’s not gonna come back the way it was,” he said. “In terms of things like coal production, I just want to bring something to be able to replace, to give them an option. The fault lies in the leadership of the past; coal operators never wanted anything to challenge them. The truth is we’ve got to offer these people options so they can transition to other jobs, and it can’t be minimum wage jobs…If we can bail out the banks, there’s no reason we can’t create opportunity for the people who brought light to this country.”

His campaign will roll out a climate and environment plank soon, he said, but he wants to launch his campaign with a focus on lobbying and corruption in Washington, which he sees as a major obstacle to progress. To that end, he’s proposing a typically atypical suite of policy solutions: Members of Congress, he proposes, should be required to donate their net wealth above a certain threshold — Ojeda puts it at a million dollars — to discourage using public office for private gain. In return, retired members of Congress would get a pension of $ 130,000 a year and be able to earn additional income to reach $ 250,000. Anything above that would be donated.

“When you get into politics, that’s supposed to be a life of service, but that’s not what it’s been. You know, a person goes into politics, they win a seat in Congress or the Senate and it’s a $ 174,000 [salary], but yet two years later they’re worth $ 30 million, and that’s one of the problems that we have in society today. That’s how come no one trusts, or has very much respect for politicians,” he said.

The notion of sacrificing for public service may seem radical, but it’s anything but that for millions of people in the military, said Ojeda. “Our servicemen that are in the military right now, staff sergeants in the United States Army out there in harm’s way, qualify for food stamps, but they truly live a life of selfless service,” he said. “Where I come from, the average family income is $ 44,000. So to me, this right here is something that everybody can relate to. We’re sick and tired of watching people that say that they’re going to fight for the people and run for office, but in reality they get in there and all they do is increase their wealth and power.”

He plans to pair that with other provocative ideas, such as requiring lobbyists to wear body cameras.

Ojeda, in positioning himself against Trump, is meeting right-wing populism with a left-wing variety. He uses language that is as direct as Trump’s, but unlike the president, he targets the nation’s elites, rather than vilifying vulnerable communities.

“The filthy rich convinced the dirt poor the filthy rich are the ones who care,” he said. “We need someone in Washington, D.C. who’s going to be a voice for these people.”