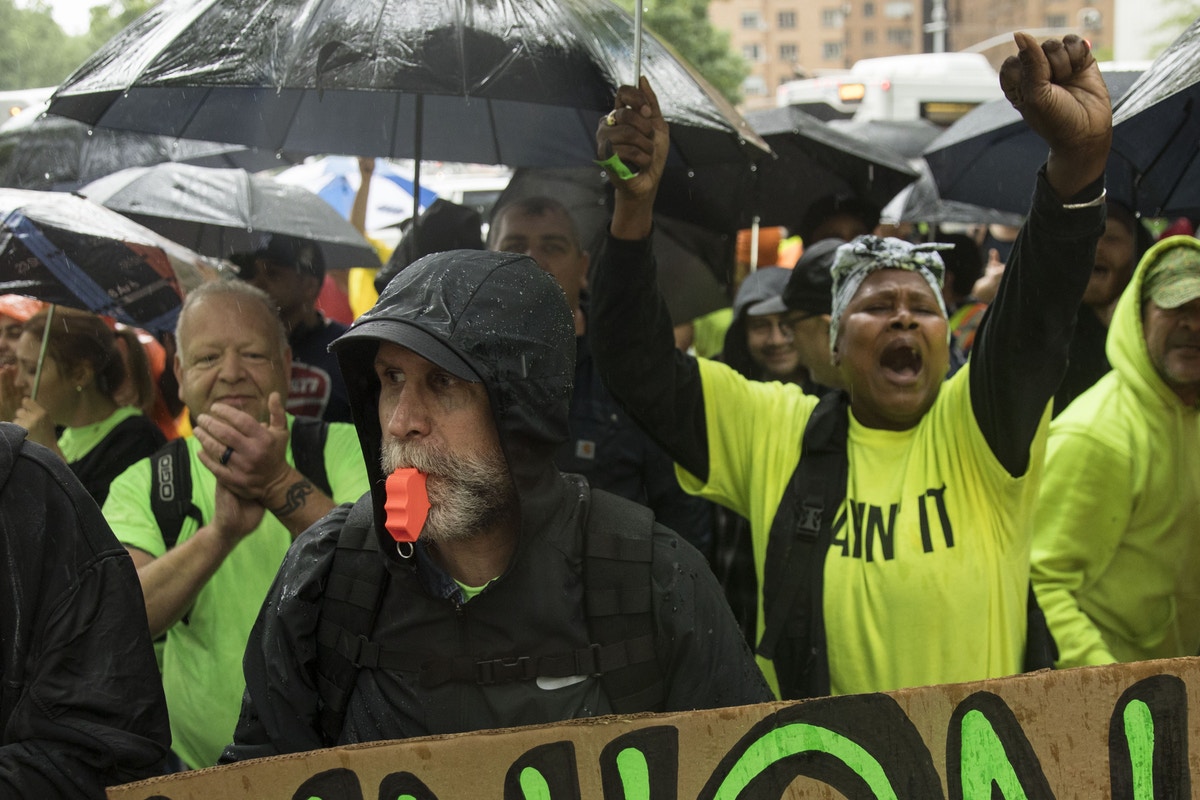 Just moments after the Janus vs. AFSCME ruling came down, several conservative think tanks launched campaigns to leverage the pivotal Supreme Court decision as a means of starving unions of funds and eventually disbanding them altogether. The effort is aimed at encouraging public-sector workers in 22 states to withhold minimum bargaining fees from their labor unions, a shift made possible by the Janus decision. As labor comes under attack, the advocacy groups will launch decertification campaigns to nullify certain unions in certain jurisdictions.

Withholding the funds and dismantling the unions could have profound effects on American politics — a feature, not a bug, of the conservative activism following Janus. Many public-sector unions and the activists who work with them are affiliated with the Democratic Party, and the organizing they carry out is dependent on the hundreds of millions of dollars they expect to collect in union fees in the coming years.

“Labor unions are going to feel the pinch.”

“In the short-term, labor unions are going to feel the pinch,” said Moshe Marvit, a fellow with the Century Foundation. “They will simultaneously have to devote far more resources to keeping their current memberships, while having to adjust to less money coming in from free-riders. This will leave unions with less resources to spend on political issues and candidates that affect working people.”

The decision prevents unions that represent public employees from collecting an “agency fee” for the cost of bargaining on behalf of the workers in the union, meaning that government employees in unions no longer must contribute dues to pay for the fair-share cost of collective bargaining.

The well-funded effort is being coordinated by the State Policy Network, an organization that steers a national patchwork of right-wing think tanks to advance policies favored by business lobbyists and GOP donors. The right-wing groups’ strategy was spelled out in a series of documents by anti-union operatives over recent months. The Intercept obtained copies of some of documents from State Policy Network think tanks.

Most State Policy Network think tanks contacted by The Intercept did not respond to requests for comment on this story. Tim Hoefer, executive director of the Empire Center, State Policy Network’s New York think tank affiliate, said in an email that the Janus decision is strictly about government employees’ constitutional rights. “No one should be forced to support an organization they don’t agree with as a condition of employment,” Hoefer wrote. “Public employees should have the right to join a union and the right to leave a union. The Empire Center does not and would not have any coordinated lobbying efforts.”

Not all public sector union members are expected to want to opt-out, so the organizers of the campaign developed methodology to target those who might be most sympathetic to withholding union fees. Teachers most likely to opt-out of union dues, for example, are being targeted by their social media postings on sites like Facebook and voter registration status. Anti-union operatives will then contact those educators most likely to abandon their union and push them to do so.

The State Policy Network recently sent a mailing to its donors highlighting the “undue political influence of government unions” and the group’s effort to curb it. “By 2020, SPN aims to empower our interstate freedom network to rescue nearly a million people from forced government unionization,” the mailing predicted, based on the Janus decision going its way. State Policy Network president Tracie Sharpe outlined the plan to harness the Janus decision, along with other campaigns, including legislation designed to decertify unions, among its top priorities.

The strategy could spell the loss of over a $ 1 billion from union coffers.

Messaging guidelines from State Policy Network leaders instructed state think tanks working on Janus-related advocacy campaigns to not to “engage in counterproductive attacks on unions and union members.” Instead, the guide suggested, participants should stress that the case is about upholding worker rights and strengthening “First Amendment rights of free speech and freedom of association.”

State Policy Network members, however, have barely concealed their broad political motives. The Mackinac Center for Public Policy, the State Policy Network affiliate think tank in Michigan, emailed supporters in February to note that the Janus decision could provide a path for enough workers to leave their union to “remove $ 1.2 billion per election cycle from union budgets.”

“Imagine,” wrote Mackinac Center president Joseph G. Lehman, “the change we will see in policy debates over public education, taxes, social welfare spending and other issues if the fear of union backlash is cut by two-thirds.”

The Empire Center has predicted that the Janus decision will cost unions in New York alone more than $ 110 million annually.

Unions have also prepared for the decision. Over the last six months, Oregon, Washington, New York, and other states have enacted union-backed legislation to counter the Janus decision by changing the rules around how workers can opt-out of mandatory agency fees. Among other provisions, the laws allow union representatives to recruit during the workday, to set the terms for opt-out periods, and ensuring unions are notified of new employees hired by a government agency — provisions that make it easier for unions to encourage potential members to join and pay fees. The wave of union-friendly legislation is designed to stem the tide of union decline in a post-Janus political environment.

Brian Minnich, the executive vice president of the Evergreen Freedom Foundation, the State Policy Network affiliate in Washington state, called the laws “acts of desperation” in an opinion column published Thursday. Minnich, a former aide to Sen. Mitch McConnell, R-Ky., noted that “watchdog” groups like his own would continue to encourage workers to abandon their unions.

It’s unclear whether the Janus-countering laws, however, will be able to staunch the flight of fees from unions.

A web portal operated by the Mackinac Center in Michigan, called MyPayMySay.com, encourages workers to withdraw union agency fees. Another set of similar sites are managed by the Freedom Foundation. StandWithWorkers.com, a site promoting the Janus decision, is sponsored by the Liberty Justice Center, which, along with the Illinois Policy Institute, are State Policy Network affiliates that represented the plaintiff Mark Janus before the Supreme Court. The Illinois think tank has and the Buckeye Institute for Public Policy, the State Policy Network affiliate in Ohio, both launched worker opt-out websites this week as well.

Several other State Policy Network think tanks submitted amicus briefs to the Supreme Court in the Janus case encouraging the justices to take make a broad decision curtailing union ability to collect agency fees. The Mackinac Center, the Freedom Foundation, and the Buckeye Institute all filed such briefs.

The network’s think tanks are particularly adept at weakening union power. The Freedom Foundation, for its part, mounted an aggressive campaign two years ago — using robo-calls, door-to-door canvassing, and targeted advertisements — to encourage over 10,000 part-time public sector workers in the states of Washington and Oregon to opt-out of union payments. That campaign leveraged an earlier Supreme Court ruling that opened the door for some workers to withhold payments to their unions.

In 2011, the John K. MacIver Institute for Public Policy, the State Policy Network affiliate in Wisconsin, mobilized public support for Gov. Scott Walker’s Act 10 legislation, which forced most public sector unions into yearly recertification, restricted collective bargaining, and, as with the Janus decision, allowed public workers to opt-out of bargaining fees. The MacIver Institute created a news service to challenge and ridicule union protesters, placed opinion columns in local newspapers in support of the law, and published reports claiming that the legislation was necessary for the local economy to grow.

The result was devastating for organized labor. The median salary for teachers in Wisconsin declined by 2.6 percent and median benefits declined 18.6 percent in the first five years after the legislation, according to one study. The Wisconsin Education Association Council, a union, reported losing about 60 percent of its members in the wake of the law, and overall union density in Wisconsin steeply declined from 14.1 percent in 2011 to 9 percent in 2016.

“There’s no doubt that with the decline in union membership here in Wisconsin, the political clout of the union bosses and their ability to automatically turn out members for Democrats has declined dramatically.”

Though the MacIver Institute claimed that its support of Act 10 was strictly economic, the think tank could barely contain its glee about the partisan impact.

“There’s no doubt that with the decline in union membership here in Wisconsin, the political clout of the union bosses and their ability to automatically turn out members for Democrats has declined dramatically,” Brett Healy, president of the MacIver Institute, told the right-wing website Daily Signal in a piece explaining how union decline accounted for President Donald Trump’s narrow victory over Hillary Clinton during the presidential election.

As a way to peel union members away, anti-union operatives will also be launching an effort to encourage teachers to leave their unions and join a group called the Association of American Educators, a conservative non-union professional society for teachers that is affiliated with the State Policy Network.

“We have a tremendous amount of work to do to ensure teachers everywhere know their association rights and are free to choose the option that best suits their goals, values, and budget,” Colin Sharkey, the vice president of the group, said after the Janus decision.

AAE, as its known, is headed up by several firebrand right-wing operatives. Alan P. Dye, one board member at AAE, has served as an attorney for the American Legislative Exchange Council, a nonprofit group that serves as a platform for lobbyists to meet state legislators and devise business-friendly state-level legislation. Another AAE board member, Becky Norton Dunlop, is a fellow at the Heritage Foundation who recently signed a letter encouraging the abolition of gun-free school zones and demanding that teachers be able to equip themselves with firearms.

Top photo: Construction workers and union members hold a rally in New York City on May 22, 2018.