Spread the love      Tweet    Montgomery County, IN — A family is grieving and asking for answers after they… 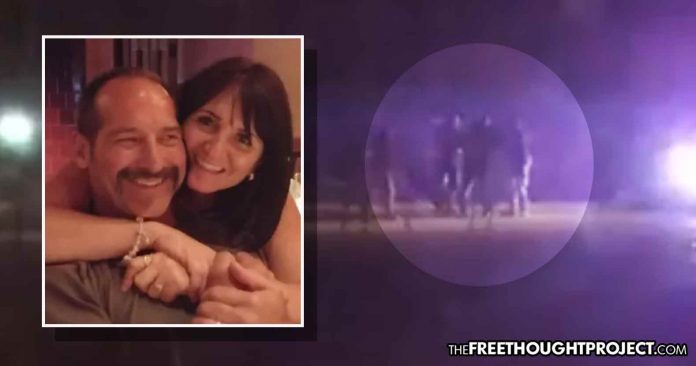 Montgomery County, IN — A family is grieving and asking for answers after they say an Indiana state trooper shot and killed their beloved father as he worked on his daughter’s car that was broken down on the side of the highway. Now, authorities have identified the officer who shot the open carrying father, Glenn Rightsell, last Friday as rookie State Trooper Daniel Organ.

Police claim that Rightsell “reached for a gun” when the trooper approached him. However, his family says that is impossible and if went for his gun in any manner it was to disarm himself for the trooper.

Rightsell was known by his family and friends to open carry everywhere he went. They dispute the official report from Organ which claims that he went for the gun. Rightsell was a pillar of the community and his family. He was 56 and owned his own masonry and tuckpointing business in northern Montgomery County. He would have absolutely no reason to pull a gun on a cop.

“We just want to make sure we do a complete and thorough job for the family and also for the officer that was involved in the shooting,” said Indiana State Police Sergeant Kim Riley.

As FOX 59 reports, Rightsell’s family said he was working on his daughter’s car, which had broken down on U.S. 231 earlier in the day. Authorities said a state trooper stopped to investigate and saw Rightsell had a gun on his waist. Authorities say Rightsell reached for that after failing to comply with the trooper’s commands, causing the trooper to fire. Rightsell later died at a hospital.

Adding to the suspicious nature of the official account, Rightsell’s family said their father called police to ask officers not to tow the car until he had a chance to look at it on his own.

“We are looking into seeing about that,” said Riley, “we have not located a phone call at this time or any type of conversation with police departments.”

Police claim that even if Rightsell did call the police, the trooper still had reason to initiate the stop.

“Even if we knew about that car being there, we’re still going to check and see,” said Riley. “We want to make sure that person isn’t needing any help.”

Police have refused to release any 911 calls and also claimed that there is no body camera or dash camera footage of the shooting. Riley said not all ISP cruisers are equipped with dash cams and claimed that Organ’s did not have one.

“I think the lack of body and dash cameras show a complete lack of caring and a disregard for safety,” Matt Clark, Rightsell’s nephew, said Monday. “The ISP superintendent should be ashamed of himself. Body and dash cams protect everyone, including his officers, from injustices.”

The aftermath of the shooting, however, was captured on video and Rightsell is seen being forced to crawl on his knees and then forced up as he bleeds, quite literally, to death.

What’s more, the neighbor who shot the video told local news that police did not take proper steps to administer first aid. Indeed, as the video shows below, Rightsell is able to get to his feet and his life could’ve likely been saved had police taken the proper action.

“When the case is completely finished, to the best of our ability, it’ll be turned over to the prosecutor’s office for review,” said Riley.

Jeff Gramman of Lafayette said he’s been friends with Rightsell for 30 years, according to the Journal and Courier, and noted that he doesn’t believe the official story.

“I think it’s (B.S.) to be honest,” Gramman said. “Glenn was a great, kind soul, always willing to help in any way, always laughing. He’s carried a gun for years and wouldn’t hurt a soul. Something is being covered up, and we all know it.”

“As far as the account that the Indiana State Police offered, I’m of the opinion that everything they stated was not true, and meant to do nothing but protect the officers in question,” Talbott said. “After watching the video, I was assured that this was a wrongful death shooting.”