An increase in NATO activities forces Russia to undertake symmetrical measures to negate the emerging threats, Sergey Shoigu said at…

An increase in NATO activities forces Russia to undertake symmetrical measures to negate the emerging threats, Sergey Shoigu said at the outside session of the Defense Ministry’s collegium.

The Russian minister noted that, in the first half of 2018, NATO conducted 13 large-scale military exercises involving over 40,000 servicemen and 2000 units of combat hardware near the bloc’s south-western borders.

Shoigu also told the Russian military command that when preparing a response to NATO’s unfriendly actions they should combine the operations aimed at strategic containment and boosting the combat preparedness of troops of the Southern Military District. However, the minister noted that a recent inspection at the district revealed that forces there were ready for any scenario involving confrontation with foreign opponents. 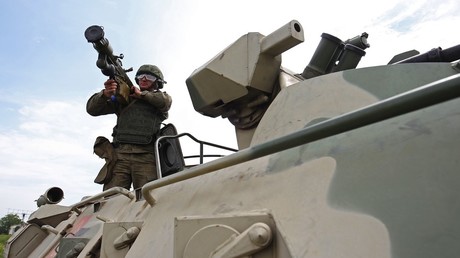 The minister emphasized that Russia was not increasing the strength of its military forces deployed on the “contact line” with the NATO bloc, but increased their combat ability through more intensive training and the introduction of new, more effective weapons.

At the same time Shoigu noted that, since 2015, the strength of NATO military groups stationed in the Baltic countries, Poland, Romania and Bulgaria increased from 2000 to 15000 people. This increase was conducted “on the background of the Baltic and Polish hysteria caused by imaginary plans of alleged Russian aggression,” he added.

As for the Crimean Republic which hosted Wednesday’s session of the Defense Ministry’s collegium, Shoigu emphasized that the Russian military group stationed on the peninsula “would not leave a single chance to any potential adversary who would risk making a claim on the originally Russian lands.” He also revealed that the Defense Ministry has created and is now perfecting a unique group that combines servicemen from various branches of the military. 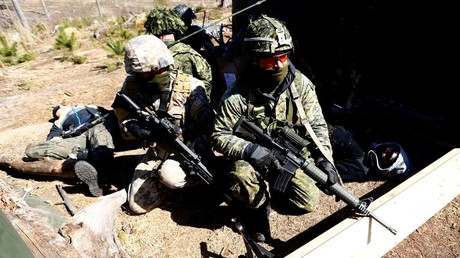 In late May, the chair of the Upper House of Russian Parliament, Valentina Matviyenko, reiterated the position that is currently shared by many Russian officials – that the image of a hostile Russia had been invented by NATO generals and Western spin doctors for internal purposes and has little to do with reality.

“NATO is a relic from the bipolar period of history that by definition cannot survive without looking for opponents. Today they found this opponent in the so-called ‘Russian threat’ and I would like to emphasize that the so-called ‘hostile’ and ‘revisionist’ Russia is not an objective reality but purely internal project of the West itself through which the West is trying to solve its own internal problems,” Valentina Matviyenko said was quoted as saying by RIA Novosti.

In early June, Russian military forces conducted major exercises in the Crimea and in South Russia’s Krasnodar Region with participation of marines, anti-aircraft units, and about 100 helicopters. The war games were held at the time as Ukrainian Navy training which led to some parts of the Azov Sea being temporarily sealed off.