Russian demonization and Russophobia have gripped the US, where politicians would rather impeach Trump than avert a nuclear war with…

Russian demonization and Russophobia have gripped the US, where politicians would rather impeach Trump than avert a nuclear war with Russia, professor emeritus at both Princeton and New York Universities Stephen Cohen believes.

While US media and establishment still cannot settle nerves after Trump-Putin summit in Helsinki, Cohen, who is also contributing editor at The Nation, and Chicago University professor John Mearsheimer, bashed the Russian bogeyman approach in an interview to Vice news.

Cohen has been labelled as Russian president’s apologist, with “tsunami” of attacks on him. However, the scientist says that those people are just uniformed, with Mearsheimer adding many refuse to engage in fair dialogue with both of them merely because they would “lose the debate.”

“We’ve demonized Putin and we’ve putinized Russia, so we’ve demonized Russia. Russophobia is running amok in this country.” Cohen said. “I’ve seen these things from the inside. I’ve re-thought and re-thought how we got to the edge of war with Russia, where we haven’t been since Cuba in 1962. And I have concluded it is 95 percent our own doing.”

Cooperation with Moscow praised by Trump during the Helsinki meeting, but seen by some in Washington even treasonous, is actually vital, according to Cohen. Despite the US president is “wrong on a lot of things” this particular part is not among them.

“If he means what he said he was right – it would be great to cooperate with Russia. I would go father – it’s imperative,” the professor said.

However, this approach does not fit the tune of US establishment, despite Trump is trying to do and stuck to what “we have demanded of every president – keep us out of war with Russia.”

The hostility towards the two leaders’ meeting and its results is “largely driven by the fact that people want to undermine Trump,” according to Mearsheimer. And the aim to get rid of Trump apparently prevails the world’s peace, his fellow scholar noted. 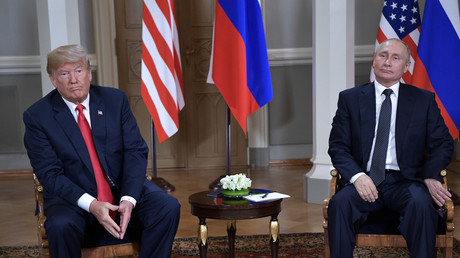 “These people would prefer trying to impeach Trump to averting nuclear war or war with Russia. If it’s come to that, Trump is no longer to blame, we are ourselves,” Cohen said.

US & its allies are to blame for Ukrainian crisis

Russian President Vladimir Putin was among those who dared to push his own agenda against American one, Mearsheimer said, stressing the Ukrainian crisis was one of the “main manifestation of that.”

“The evidence is clear that the United State and its West European allies [are principally responsible for the crisis],” he argued.

Going further on the topic, Cohen stressed that the idea to bring Ukraine to the West militarily and economically was “deeply rooted” in Washington to make Russia “nothing more than what [former US President Barack] Obama called ‘a weak regional power.'”

The US would never tolerate the situation similar to Ukraine’s ambitions to join NATO on its own doorstep, Mearsheimer stressed. The professors argued that if the Soviet Union or China had formed a military alliance with Mexico or Canada, everybody would have demanded the US leadership to react and this would be deemed not aggression, but defense.

“Any fool could have told you that by bringing in countries on Russia’s borders with historical grievances against Russia, we’re going to diminish everybody’s national security,” Cohen said.