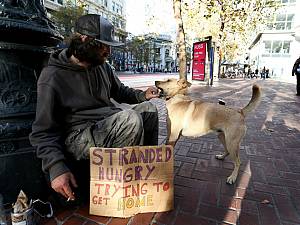 On Tuesday, some 60 percent of Bay City residents voted in favor of Proposition C, a ballot initiative that would raise an estimated $ 300 million a year for housing, mental health treatment, and other services for the city’s 7,500 homeless residents through a hike in the city’s business gross receipts tax.

That’s a huge amount of new revenue, increasing the take from the city’s current business taxes by some 33 percent, and nearly doubling the $ 380 million the city currently spends on the homeless.

Because it’s a gross receipts tax, it would tax companies’ total revenue, regardless of how profitable they are.

The specter of such a huge tax hike—the largest in the city’s history—proved controversial long before Tuesday. San Francisco mayor London Breed, State Sen. Scott Weiner (D–San Francisco), and many of the city’s tech businesses came out against it.

Supporting Prop C were a coalition of homeless advocates, as well as Marc Benioff, the colorful billionaire CEO of Salesforce. Benioff spent at least $ 7 million of personal and corporate funds supporting the measure.

Despite a commanding win at the polls, the future of Prop C is still very much up in the air thanks to a confusing court ruling which has left California’s cities unsure of what percentage of the vote tax initiatives must win to become law. The California Constitution requires that “special taxes”—those dedicated to funding a specific government program—must be approved by two-thirds of voters. That would seem to invalidate Prop. C, which garnered only 60 percent of the vote.

However, in August 2017, the California Supreme Court ruled that some constitutional limitations on ballot initiatives only apply to those measures placed on the ballot by local governments, and not to citizen initiatives that earn their spot on the ballot through signature gathering campaigns. While that particular case did not specifically address voting thresholds, it has nonetheless provided ammo for those claiming that special taxes put on the ballot as citizens initiatives—which would include Prop. C—need only a simple majority approval.

Then in June, San Francisco passed two special taxes—one for teacher salaries, the other for subsidized childcare—with less than a two-thirds majority. Shortly thereafter, the Howard Jarvis Taxpayers Association—an anti-tax group—sued the city, claiming that the two taxes were illegal.

This has city leaders in a pickle.

Going ahead with spending Prop. C tax dollars will undoubtably get the city sued again. Sitting on its hands will piss off the sizable majority of voters who approved the tax, and are clearly anxious for the city to do something about the rising tide of homelessness.

That would include Benioff, who’s urged the city to get spending, legal consequences be damned.

“Let’s enforce Prop. C. There’s no legal question. If anyone is coming after this, the City Attorney’s job is to defend it, and of course we are going to give him our full support as well,” Benioff told the San Francisco Examiner on Wednesday.

City Controller Ben Rosenfield, however, has said that his office cannot sign off on spending any of this money given the ongoing legal uncertainty surrounding the tax.

“Should Proposition C fall short of approval by two-thirds of voters,” wrote Rosenfield in a Wednesday letter to Breed, “my office would not be able to certify these funds given current legal uncertainties.”

This kind of legal confusion is one of the reasons Breed advocated against passing Prop. C in the first place.

“If it passes, Proposition C will likely immediately become part of an ongoing lawsuit to invalidate it,” she wrote in an October blog post, warning that “the lawsuit could go on for years, preventing us from even moving forward similar homelessness funding measures. The City could be left balancing its budget with a $ 300 million unknown baked in.”

In that same post Breed also laid out a number of policy objections to Prop. C, saying the initiative’s spending plan is both vague and unaccountable.

Indeed, there are a lot of reasons to be skeptical that Prop C is what San Francisco needs to address its serious homelessness issues. Getting homeless folks off the streets and into a position where they can look after themselves is no easy task, and belies one single policy solution.

A growing consensus among experts is that “housing first” approach—where you get the homeless into permanent housing first and then get to work solving other substance abuse or mental health issues—is the way to go. That’s a tall order in a city that managed to add only 1,400 units of affordable housing last year, and where publicly-funded affordable housing can cost as much as $ 700,000 per unit to construct.

Meanwhile, the city’s top economist estimates that the gross receipts tax hike contained in Prop. C will cost the city $ 200-240 million a year in GDP and anywhere from 14,700 to 17,500 jobs over the next 20 years. That’s because under Prop. C, some 3 percent of the city’s businesses would be responsible for paying about 67 percent of its business taxes, which is significantly more than the 57 percent they pay now. (Business taxes currently pay for about 8 percent of San Francisco’s $ 12 billion annual budget. Under Prop. C, business taxes would cover closer to 10 percent of the city budget.)

“The risk of losing businesses is higher when a tax is shouldered by a small number of businesses rather than a broader set of taxpayers,” warned local think tank SPUR (which ultimately came out in support of Prop. C.)

Before jacking up taxes on the goose that lays the golden egg, San Francisco voters and politicians could look at city policies that make it difficult and damn expensive to build new housing, including ludicrously restrictive zoning laws and a byzantine permitting approval process. After all, shaking down businesses for more taxes might not even be legal.