Was this the Gatwick drone? Santa Claus and his reindeers are the latest suspects in the Gatwick Airport Drone Row… 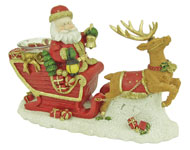 Was this the Gatwick drone?

Although the drone at the airport was sighted last week, and Santa is still snugly tucked up in bed at his Lapland grotto, the authorities, who don't know their arses from their elbows, are keen to avoid looking idle by shunting the blame somewhere else, regardless of how ridiculous their suggestions might be.

So, when an unidentified flying object at an airport needed pigeon-holing, and with Christmas on everyone's minds, the most natural thing in the world – it seemed, to the police – was to put Santa's name squarely in the frame.

Police the length and breadth of Britain are on the lookout for Santa Claus and his reindeer tonight, and have warned the public not to approach him, even with a sprig of mistletoe.