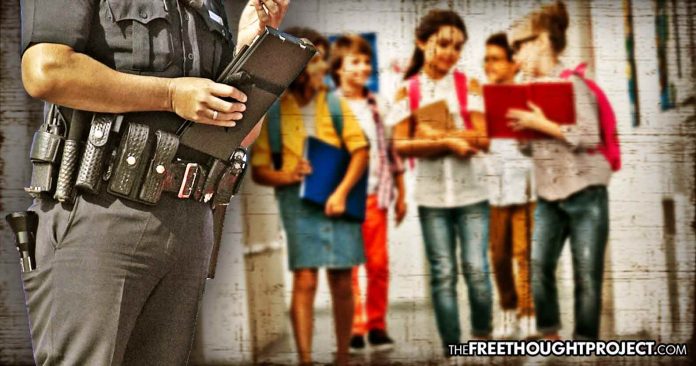 Houston, TX — What started with an alleged missing $ 50 in a middle school choir class ended in 22 depraved and disgusting strip-searches of innocent children on behalf of the state. Now, after a ridiculous back and fourth in the court system, the taxpayers are being held liable.

According to the court documents, the incident began when $ 50 allegedly went missing during a 6th grade choir class at Houston’s public Lanier Middle School. The assistant principal was brought in to investigate and no money turned up. That’s when the school’s resource officer made the suggestion “that girls like to hide things in their bras and panties.”

Assistant Principal Verlinda Higgins then brought all twenty-two girls in the choir class to the school nurse who, according to the lawsuit,

“strip-searched them, taking them one at a time into a bathroom, where she “check[ed] around the waistband of [their] panties,” loosened their bras, and checked “under their shirts.” The girls “were made to lift their shirts so they were exposed from the shoulder to the waist.” No parents were notified, despite the girls’ requests.”

After the disturbing strip-search of nearly two dozen preteen girls concluded—nothing was found.

After finding out their children had been illegally strip-searched at school, furious parents filed a lawsuit. In spite of admitting the school violated the students’ rights, however, the lower court dismissed the lawsuit, citing lack of a claim. Naturally, the parents appealed the decision and, last week, the Fifth Circuit Appeals Court overturned the lower court’s decision in a scathing reversal.

During a sixth-grade choir class, an assistant principal allegedly ordered a mass, suspicionless strip search of the underwear of twenty-two preteen girls. All agree the search violated the girls’ constitutional rights under Texas and federal law. Even so, the district court dismissed the girls’ lawsuit against the school district for failure to state a claim. We reverse.

As Tim Cushing points out, writing for Techdirt, the school admitted it violated the students’ rights. It admitted it performed a search without justification or guiding policies. It all but started cutting settlement checks and yet the lower court said no viable claim was made by the plaintiffs.

The idea of a school detaining and strip-searching an entire class of preteen girls to look for an allegedly missing $ 50 should shock the conscious. Equally as disturbing as the act itself, however, is the fact that not a single person involved in the illegal search was punished.

The only “discipline” handed down for such a heinous violation of children’s rights was in the form of a memo chastising the Vice Principal, not for the strip-search itself, but for conducting the search to find something not actually considered “contraband.”

As the 5th Circuit points out:

Regardless, the supposed lack of “contraband” appears to have been the principal’s only concern; the memo never criticized the search for invading the underwear of twenty-two preteen girls, or for doing so without particularized suspicion.

The 5th Circuit also pointed out that the memo even suggested that strip-searching preteen children is acceptable so long as the principal is notified.

The memo further made clear that, at least in the principal’s mind, such strip searches of students are not per se improper under school district policy. Rather than forbidding all strip searches going forward, the memo requested: “In the future, if you feel a student must have a search requiring a strip search, please notify me before proceeding.”

There you have it. In police state USA, innocent school children can and will be strip-searched with no probable cause, those who carry it out will not face consequences, and, despite admitting to the violation of the girls’ rights, not a single person was held accountable. Disturbing indeed.

Who Helped Biden Rip Us Off At The Gas Pump?