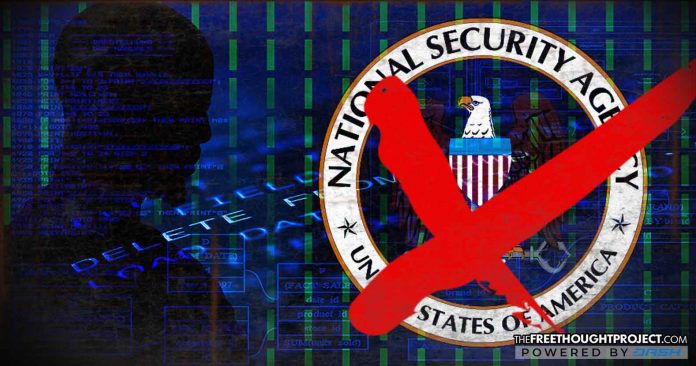 Michigan has become the first state to ban the National Security Agency’s intrusive data collection practices by passing a law that prohibits law enforcement and state agencies from turning over personal data to the federal government without due process.

The Fourth Amendment Rights Protection Act, or HB4430, will go into effect next month after it passed the Michigan state legislature with overwhelming support and only one “no” vote.

The text of the bill states that its purpose is “to prohibit this state and certain other governmental agents, employees, and entities in this state from assisting a federal agency in obtaining certain forms of data without a warrant; and to prohibit certain uses of certain data collected without a warrant.”

According to the new law, the state and its political subdivisions “shall not assist, participate with, or provide material support or resources to a federal agency to enable it to collect or to facilitate in the collection or use of a person’s electronic data or metadata,” unless at least or more of the following criteria are met:

As the Washington Examiner reported, the new law is “the biggest accomplishment yet growing out of efforts to block water to a massive NSA data-storage center in Bluffdale, Utah.” Similar laws have been proposed and have fallen short in states such as Alaska, Maryland, South Carolina, and Washington.

Michigan State Rep. Martin Howrylak, a sponsor of the bill, told the Examiner that he believes its passage “speaks to the fact that a lot of the domestic surveillance of American citizens is highly unpopular.”

“It hangs up a sign on Michigan’s door saying, ‘No violation of the Fourth Amendment, look elsewhere,’” Howrylak said. “Democrats, as well as Republicans, would certainly stand very strong in our position on what this law means.”

While Howrylak said he thinks the law makes “a strong court case saying this is what the state intends,” he hopes other states will join in by passing similar legislation, in an effort to cripple the NSA’s illegal activities.

Next month marks 5 years since former NSA contractor Edward Snowden released a trove of classified documents revealing that the United States government was routinely collecting metadata from innocent American citizens without warrants, and using “national security” to justify its actions.

While the NSA’s warrantless data collection was ruled illegal by a court in June 2015, it has continued and the government has attempted to cover up its illegal actions by writing them into law. The latest example of this occurred earlier this year when Congress reauthorized Section 702 of the Foreign Intelligence Surveillance Act (FISA).

Section 702 has served as the foundation for the NSA’s largest and most egregious surveillance programs for the last decade. The first attempt to reauthorize it was through the introduction of the USA Liberty Act. As The Free Thought Project reported, Congress claimed the bill would “better protect Americans’ privacy” by requiring the government to have “a legitimate national security purpose” before searching an individual’s database.

However, what the bill did not advertise was the fact that it did not actually address the legitimate problems that exist with Section 702. The FBI’s “legitimate national security purpose” could be justified by just about any reason the agency chooses to give, and agents would only need supervisory authority in order to search Americans’ metadata.

When the USA Liberty Act failed, the House Permanent Select Committee on Intelligence introduced the FISA Amendments Reauthorization Act of 2017, which renewed Section 702 for six years, after it was included in a massive spending bill passed by Congress.

By signing the Fourth Amendment Rights Protection Act into law, the state of Michigan is taking a stand against the federal government’s unconstitutional practice of stealing data from innocent Americans without a warrant, and it is setting a precedent for other states in the country to follow.

Endless Empire? Despite Peace Deal US To Remain In Afghanistan

Cop Who Killed Innocent EMT in Her Bed, Accused of Picking Up Drunk Women On-Duty, Raping Them

NO JAIL for Police Chief Caught Stealing 3,000 Bags of Heroin from Evidence Room